v Sports in Kansas: 25 Quarterbacks to Watch for 2015 - Sports in Kansas 
Warning: include(../includes/bodytag.php): failed to open stream: No such file or directory in /home/kansass/public_html/ks/news/index.php on line 36

Sports in Kansas: 25 Quarterbacks to Watch for 2015 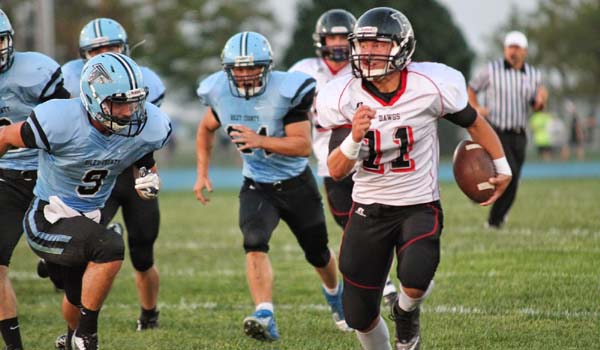 Several quarterbacks return after having big seasons in 2014. Check out who to watch in 2015. Stay tuned over the next few weeks as we will do this position by position and release a full list of players to watch in Kansas. This list from Sports in Kansas is powered by Performance Spine and Sport in Pittsburg, offering full-body cryotheraphy

Alphabatical by last name (not ranked)

Byers is one of the more underrated players in the Kansas City area. His numbers prove otherwise as he passed for over 1,800 yards and threw 20 touchdowns to just five interceptions in 2014. He proved to be a dual-threat as he also rushed for over 600 and added eight more touchdowns in leading the Braves to a 7-3 record.

Cowan shined at times as a sophomore as he passed for over 900 yards and nine touchdowns for the Vikings, he also rushed for nearly 300 more. He has had a nice off-season camping and even picked up an offer from Emporia State as he heads into his junior season.

Crites losing his best target, Layne Biberle, from the 2014 8M-I state title team, but it still doesn’t discount him as one of the top players in Kansas for 2015. He passed for 2,106 yards and 39 touchdowns in 2014 in leading the Oilers to a 13-0 record. Crites proved he can get it done with his feet as well, rushing for 555 yards and 18 more touchdowns.

Dolan passed for over 2,000 yards as a junior in the Eastern Kansas League last fall. North had zero wins in 2013 and improved to two last year in its very brutal league.

Frausto is arguably the fastest quarterback in Kansas. He has 4.4 speed and features 22.1 speed in the 200 meters. The senior dual threat accounted for over 2,000 yards of offense and 32 touchdowns as a junior. He has one FBS offer from Air Force and also some FCS offers on the table.

We knew he would be good when he first stepped on the field as a receiver as a freshman. Little did we know he would become one of the best dual-threat quarterbacks we’ve seen in Kansas in quite some time. Horak led Rossville to its first ever state title last season by passing for 1,651 yards (22 TD) and rushing for 2,089 (28 TD) in 2014. He has accounted for over 4,000 rushing yards and 3,400 career passing yards with 108 career TDs. If Kansas high school had a Heisman race, he would be the preseason favorite. This kid will be a steal for a college and projects to play slot receiver at the next level. Rossville lost a lot but should have another pieces to the puzzle to be a contender again, their biggest contender as always is right next door in Silver Lake.

Huslig put up huge numbers in 2014 by passing for 2,111 yards and 25 touchdowns in 11 games. He returns one of his top targets in Darraja Parnell (800 plus yards) and running back Jordan Birch (1,200 yards) in 2015. Andover Central seems to have the right pieces to make a run in 4A-I this season.

Koch isn’t your typical quarterback, he is more like a running back playing the position. However, he has shown the ability to throw the football with over 1,000 yards last season. He’s a big threat when he’s using his feet, rushing for 1,167 yards and 13 touchdowns in 2014. Mill Valley returns a lot of nice pieces to their team from 2014 and has beefed up their schedule before officially joining the EKL next season. Koch is one of the better athletes in Kansas as is his utility man,Christian Jegen, who also returns this season. Lineman Ben Hecht, another premier 5A player who committed to North Dakota State, is also back.

McCumber is a nice dual threat quarterback and will be one of the players to watch for in the Kansas City area this fall. He had over 600 yards rushing and 1,000 yards passing last year as a junior. He features speed in the 4.5 range. Although he lost some key lineman, including A.J. Harris now at Mizzou, he does return William Evans and A.J Totta in the backfield. It will be very hard to key on a Blue Valley player this fall.

McDaniel doesn’t get on here because of his size as he stands 5-foot-7 and weighs 130 pounds. Those height and weight numbers may not be great but his football numbers are like something off a video game. He had 1,707 passing (33 TD) and 1,546 rushing (35 TD) as a junior in 2014. He also added 177 tackles on defense. We don’t care what division you play in, that’s impressive.

It’s no secret what Halstead likes to do and that is to run the football. McKee isn’t going to sit back and throw it, he only threw 49 times last season completing 27 of them for 355 yards. However, he is one of the better running quarterbacks in small classes Kansas. He rushed for 1,378 yards and 21 touchdowns for the Dragons (10-3) in 2014. Although Halstead lost some key lineman last year they do return one of Kansas’ best in running back Blake Beckett, who rushed for over 2,100 yards last season. Could this be the best small school backfield in Kansas?

McCullough is one of the best junior basketball players in Kansas, but he can also play some football. He has started at Ottawa since he has been a freshman and should be one of the better junior quarterbacks in Kansas this fall. It has been reported that McCullough could miss the football season because of a surgery.

Mills led the Vikings to their first winning season in 14 years and to the playoffs for the first time in 12 years in 2014, that alone gets him on the list for a player worth watching in 2015. He rushed for 1,108 yards (10 TD) and passed for 982 (11 TD). There weren’t many QB’s in Kansas last year that nearly doubled up as 1,000/1,000 in rushing/passing and Mills was just 18 passing yards away. He will look to lead Northeast to back-to-back win seasons for the first time since the 1980s.

Monty is a big and fast quarterback for the class of 2016 in Kansas. He even made the finals of the 5A boys 100 meter dash in 2015, not something you often see from a high school quarterback that can pass. He has an offer from Air Force and also a few from the FCS ranks. Monty has passed for over 2,500 yards combined over the last two seasons. He also rushed for over 700 yards last season as a junior.

Nunez showed he could do it in the air and with his feet as a sophomore in 2014. He passed for 704 yards (7 TD) and rushed for another 521 yards (11 TD). Nunez returns in a backfield that features Jared Koster, who rushed for over 1,000 yards last season.

Odermann proved to be the perfect fit at quarterback in the first year flexbone offense of Randy Dreiling in 2014. He rushed for over 1,000 yards and ran for 13 touchdowns in leading the Saints to a runner-up finish in 5A. Aquinas won’t throw a bunch but Odermanm did complete 45-of-99 passes for 795 yards, 10 of which went for touchdowns. There are too many players to name, but we do know one thing, Aquinas is loaded on paper for 2015.

Ruder should be the top sophomore quarterback in Kansas this season. Before injury in 2014, he looked like a veteran and was only a freshman throwing for nearly 600 yards in just parts of four games. He also features nice speed for his size running in the 4.6-4.7 range. He camped at Minnesota, USC and Washington State this summer. Ruder is 4-0 as a starting quarterback in high school after being injured early last season.

Rust accounted for 25 touchdowns as a dual-threat quarterback last year for the Panthers after replacing Jeremy Dunham off the 2013 state championship team. Rust shows the ability to get it done with his legs first as he features speed in the 4.5-4.6 range. He will have to be a big part of the Derby offense, along with Xanders to make a run in 2015.

SM North football hasn’t had a lot of bright spots lately, but Will Schneider has been one for the program. Last year as a sophomore, he led the Sunflower League in passing at 1,976 yards. He will have to find a new favorite target as Nick Perez graduated after having over 900 yards receiving last season.

Teeter is a rare four year starter at the quarterback position in high school football and even more rare that he has done it at two different schools, transferring from Goodland after his dad, Kent, was hired at Holcomb before the 2014 season. He enters his senior season with 5,010 passing yards and 55 career TDs. A lot of pieces are back for Holcomb to be a serious contender in 4A-II this season. He also serves as the team’s placekicker.

Tiernan, who was a three year starter at Osborne and led them to a state title in 2013, has transferred to Solomon for his senior year as his dad took the head football coaching position in the off-season. He is one of the most accurate passers in Kansas history as he enters the 2015 campaign with a career completion percentage of 72.1. State record is 60.7%. Tiernan has also passed for 4,996 yards in his 8-man career.

Torneden, who just committed to play football at 4x FCS National Champion North Dakota State, is the definition of athlete. He will be able to play in multiple spots in college, but stars at quarterback for the Firebirds. He rushed for over 1,000 yards last season and passed for over 600 more. Although Free State is in the Sunflower League, they are on the west side of the bracket for 6A football. Meaning if they make a state title game, they would more than likely meet an opponent from their own league.

Waddell is a very athletic quarterback, showing he can play multiple positions as he started out as a wide receiver two years ago at Collegiate. While he gets it done through the air first, he also has shown the ability to get it done with his legs.

Walters had a breakout season last year in which he passed for 2,288 and 18 touchdowns. He threw just seven interceptions on the season, while completing nearly 60 percent of his passes. He will be one of the premier players to watch in the WAC this season.

Williams helped lead Buhler to its first ever state title just two seasons ago as a sophomore. Williams had over 3,300 yards as a dual-threat quarterback in 2015. Him and Dillon Engelland form one of the better backfields in Kansas this season. Williams is also an all-state player on defense.