v Maize's Keiryn Swenson not finished yet - Sports in Kansas 
Warning: include(../includes/bodytag.php): failed to open stream: No such file or directory in /home/kansass/public_html/ks/news/index.php on line 36

Keiryn Swenson of Maize is among the nations best in javelin. (submitted photo) 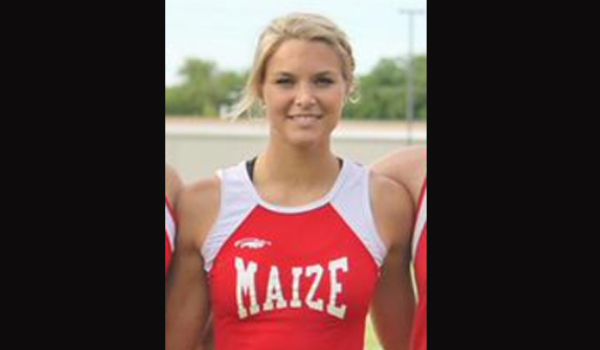 Maize senior Keiryn Swenson has already graduated high school and has accomplished way more than any high school athlete could dream of. She was the state Gatorade Athlete of the Year in track and field last year and also earned the same honor this season in basketball. She has been an all-state athlete at Maize for nearly her entire career and is one of the nations best javelin throwers. Swenson has signed to play basketball and throw the javelin at the University of Arkansas.

However the senior isn't satisfied just yet, no matter what accolades she has received, and she still has one more state title to go out and get in the javelin on Saturday at Cessna Stadium in Wichita.

"My goal is to win the javelin and break the state record. I want to go out knowing I gave it everything I had and have no regrets." Swenson said.

The 6A girls state record is also held by a Maize alum, a throw of 149-07 set by Ulrika Hinson back in 2004. Swenson has thrown way past that with her career best of 158-04 just two weeks ago, however in order for a 6A state record to fall it has to happen at the state meet. Swenson's throw ranks #1 in Kansas this season and #6 in the United States.

Swenson, a multi-sport athlete, isn't just a javelin thrower either. She placed fourth in the girls discus throw with a toss of 123-07 on Friday and also competed in the high jump but didn't medal. Although not totally satisfied with her high jump on Friday, Swenson has realized that her career has been a very, very good one.

"It would be really hard to say that I'm not happier than I am right now. I have had amazing teammates and coaches that have always pushed me to become better. Knowing that tomorrow is the last state event of my career is kind of sad, but at the same time I have never been more ready to compete in my life one last time at state." Swenson.

Swenson will look to defend her 6A title and is scheduled to throw at 11:30 a.m. on Saturday in the girls 6A javelin throw. Based on regional seeding, which Swenson threw 149-02, she is at least 20 feet better than every competitor in the field.