v Faces in KS: Riley Osen - Sports in Kansas 
Warning: include(../includes/bodytag.php): failed to open stream: No such file or directory in /home/kansass/public_html/ks/news/index.php on line 36 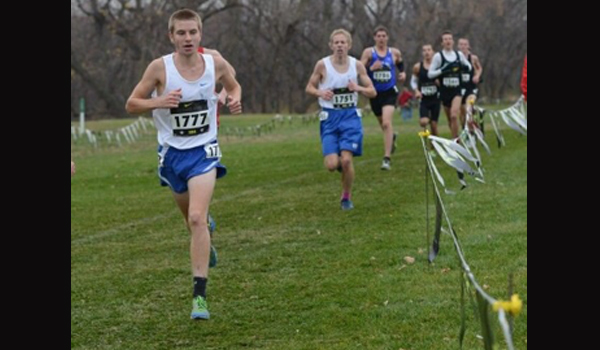 Most of the time to be one of the best all-time in Kansas it may take until your senior year of high school or at least later in your career. Not the case for Winfield junior distance runner, Riley Osen. Osen set the state meet record last year in 4A in the boys 3200 as a sophomore with a time of 9:26.71, beating a 33 year old record that was set by Mike Rogers of Lyons in 1981.

"It was a great feeling everyone was cheering for me and it was my PR for the year, so it was a lot of fun." Osen said.

Osen, now a junior, isn't done just yet. To think that he is the best 3200 meter runner ever to run in the 4A classification with two state meets left is just insane. This season he has already crushed his 9:26.71, by running a 9:13.43 to win the prestigious KU relays back in April. That time ranks #1 in the state of Kansas this year in all-classifications.

"I feel like I have elevated myself to a new level this season. I didn't PR in cross country so setting a 13 second PR in the 3200 and winning KU is awesome." Osen said.

Osen doesn't just roll out of bed and become a state champion. There is no off-season for him.

"In the summer I got up to a three week stretch where i did 65 miles, 70 miles, 65 miles. I do play basketball in the winter but I also run on non-game days." Osen said.

So last year the state record may have been a surprise to many across Kansas, but don't be surprised if you see the Winfield junior lower his state record on Friday at Cessna Stadium in Wichita.

We caught up with the outstanding junior below...

How did you get involved in running?

I got involved in middle school just to stay in shape for soccer because I was a soccer player and I had success so I stopped playing soccer and started running.

What was it like to set the record at state last season?

Setting the record was a great feeling because everyone at Cessna was cheering for me and it was my pr for the year so it was a lot of fun.

How have you done this season so far?

This season I feel like I've just elevated myself to a new level in running. I didn't pr at all in cross country so setting a 13 second pr in the 3200 and winning KU is awesome and I've also ran 4:20 for my 1600 which is a 5 second pr from last year so this season has just been awesome.

Was it a surprise to you of setting the 4A meet record last year?

It wasn't a huge surprise because I'd already ran 9:33 last year and 15:33 for the 5k so I had the ability to do it, plus I'd gotten 2nd in cross country last year too. What was really surprising was that I ran 9:26 because the race went out so slow since it was a championship race but I just felt really good on the last mile and the time ended up being really fast.

What are your goals for this year, will we see a fast time at state?


My goals for this year were to pr in the 800,1600,3200 which I've done and to also win state in the mile and two mile. Um if the race calls for a very fast time I believe that I can improve on my record but we will have to see how the race goes.

Mondays are always a hard workout usually something with more volume or longer repeats. Tuesdays are easy with some type of speed work after. Wednesdays are another hard workout but it'll either be speed stuff or just shorter repeats. Thursday is just pre meet. Fridays we usually have a meet. Saturday is usually an easy run then Sundays are long run days.

During the summer last year I got up to a three week stretch where I did 65 miles, 70 miles, 65 miles. But this summer I'm not sure what my mileage will be. During the winter I play basket ball so I just run some miles after practice every day and I don't run on game days and on the weekends I do easy miles ok Saturday and a long run on Sunday.

Any other workouts that you use for track and field?

We know your only a junior but do you have any idea of your plans at the next level?

I really don't know where I want to go after next year since I can't be contacted other than email until this summer but I really want to run at the next level and hopefully at the D1 level.

I like growing up in Winfield it's small but not too small if that makes sense. You can usually find fun things to do and you know a lot of people but not everyone. There are some downside though like we don't really have any cool trials to run on and we only have a couple of really cool spots to run. So running gets kind of old in Winfield but I like it.

Just how awesome is it to run at the state track and field meet?

State and KU are definitely the two coolest track meets to go to. Really nothing compares to Saturday at the state track meet when you're coming down the homestretch and you have all those fans yelling for you it's an amazing feeling and then looking up and seeing everyone pumped up it's a magical feeling.

Just how good are some of the distance runners in Kansas this year, it seems to be pretty loaded?

This is for sure the best group of runners Kansas has had since I've been in high school and probably for a while. The depth is crazy this year. There's 5 guys 4:20 and faster and like 5 guys 9:20 or faster. Just in the 4A mile we have me at 4:20 Ty Dickerson at 4:21 and Travis Hodge at 4:23 when the 4A state record is only 4:22 then something crazy is happening in Kansas.

When you are not running, what do you do for fun?

Like I said before Winfield is really small but there is usually something to do. I like to play ultimate Frisbee and disc golf and really just play sports other than running miles all the time. I just like to get wild with my friends. But  a lot of the time I'm entertained by a group chat that includes the u18 Brocaw Blazers team that went perfect at the Coaches Cross Country Nationals: Luke Embry, George Letner, Dylan Hodgson, Ethan Hartzell, Nic Skinner, Caden Callaway, Zack Penrod, Stuart McNutt, Tristan Eastham, Joe Gorthy, and Joe Pierce.

I can juggle and solve a Rubik's cube. I always take my Rubik's cube to meets cause I like to solve it before to get my mind off things and focus I guess. Also I can't ride a bike…