v Faces in KS: Mason Knopp - Sports in Kansas 
Warning: include(../includes/bodytag.php): failed to open stream: No such file or directory in /home/kansass/public_html/ks/news/index.php on line 36 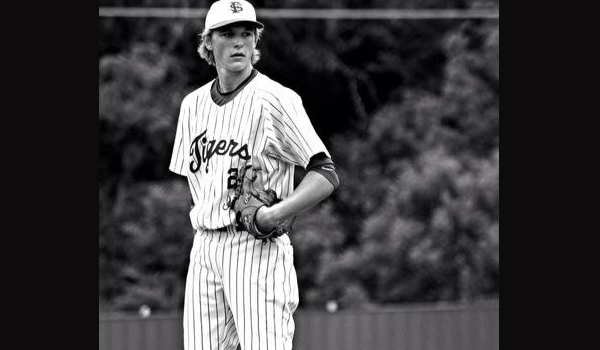 Fort Scott senior Mason Knopp, a pitcher and catcher, has established himself as one of the elite baseball players in Kansas over the last two seasons. The senior all-state selection and his teammates have helped elevate the Fort Scott baseball program to a level it hasn’t seen in a while.  The Tigers are making consecutive appearances at state for the first time in 14 seasons.

As a pitcher, Knopp has a 6-1 record this year with a 0.95 ERA with 66 strikeouts in 44 innings pitched, while walking only four. The 6-foot-2 170 pound right hander, has a variety of pitches ranging from a 2-seam, 4-seam, curve, circle change, and slider, but has been known for his speed this season. In his one game with the radar gun on him this year, he was clocked at 88 MPH several times. As a hitter he is hitting .353 this season with seven doubles and 15 RBI.

Just last week in the 4A-I regional championship against state ranked Labette County, Knopp had the best game of his career on the mound, giving up only two hits against one of the better hitting teams in the state.

“It’s as dominant as I have ever seen him. Labette had a very, very good lineup and no disrespect but I thought he made very good hitters look fairly foolish. Our catcher Chase Brown and him were on the same page. He was virtually unhittable. It was one of the best performances I have ever seen.” Fort Scott head coach Josh Regan said.

The Tigers, who placed fourth last season, are making consecutive state tournament appearances for just the second time in school history. They have a combined record 37-9 over the last two baseball seasons. The Tigers now have nine total state baseball appearances as a school, but have never won a state baseball title.

“This season started out slow but it’s gone good so far. We had some early losses, but it has made us a better team. We just have to continue to play the way we have been, we've been hitting and pitching well, and our defense has been great this year so if we just keep doing that having fun that's all it'll take to do well at state.” Knopp said.

Early losses for Fort Scott could be contributed to most of their team being gone for early practices because the Tigers were participating in the 4A-I state basketball tournament in Salina.

“Our kids were out for some practices because of basketball. People asked me if I was worried and I said I think it helps them playing all the sports and being in those high pressured situations that they will have to face in a state tournament type situation.” Regan said.

Fort Scott has been more known as a football town over the last several years in the state of Kansas, winning two state titles in the past 19 years and always being a contender in the 4A/5A classifications. Recently Fort Scott has made their presence known on the baseball diamond and are also becoming a baseball town.

Maybe it’s because the Tigers have an idol to look up to. An idol named, Adam LaRoche, a Fort Scott 1998 alum, now with the Chicago Whitesox, who donated the brand new $2.2 million dollar baseball complex (Dave Regan Field) at Fort Scott. LaRoche has been in the big leagues since 2004. He is also a cousin of Coach Regan and the nephew of Dave Regan, his late coach that the brand new field was named after this baseball season. The Tigers highest finish ever was LaRoche’s senior year back in 1998 when they took second in the 5A state tournament.

“We have a really good football program and always have. A lot of kids look up to Adam and want to be like him so yeah the kids have something to look forward to. Getting to play on a dream field that Adam donated is awesome.” Knopp said.

Knopp, who has signed to play at Neosho County Community College, isn’t the only pitcher on the Tigers team that has experienced great success this season. Wyatt Reehl, who combines with Knopp for a 1-2 punch for the Tigers, features an ERA of under 0.30 this season.

“I feel like our 1-2 our as good as anyone. Wyatt has thrown just over 30 innings and has an era of 0.295 this season. Wyatt has been outstanding for us. Mason is who he is, I feel like he’s the best in the state.” Regan said.

The group of seniors, more known as baseball players, have overachieved in every other sport they’ve played this year.

“I told them they are one of the most successful classes that have came through here when it comes to all sports. It’s not about just the talent, they overachieve a little bit, especially in football and basketball, because of their chemistry. They are unselfish and truly all best friends. It’s all about the team. Their work ethic is outstanding. It’s the type of group that is a coaches dream.” Regan said.

Before history can be made, the Tigers, who are the two seed, will have to take care of some first and second round action. They take on Rose Hill (15-7) at 4 p.m. on Thursday at Dean Evans Stadium in Salina in the opening round of 4A-I state.. With a win they would get the winner of McPherson (15-7) and Ottawa (16-5) on Friday in the 4A-I semifinals.

We caught up with the outstanding senior Mason Knopp below...

Thanks to Jordan Witt of Lifeinsurancecommander.com and Performance Spine and Sport in Pittsburg for sponsoring all Fort Scott coverage with Sports in Kansas this school year.

I grew up going to my 2 older brothers games and just playing catch with the other kids and always loved it. I played little league as soon as I was old enough.

The season has gone good so far, we started out slow and had a couple of loses early but we really learned from them and I think they have made us a better team.

What will it take for you guys to bring home a state title this week?

We just have to continue to play the way we have we been, we've been hitting and pitching well, and our defense has been great this year so if we just keep doing that having fun that's all it'll take.

How big was it for you all to get experience at state last year?

I think that'll help out a lot for this year, we know the field and we know what's it's like to play on it. Almost all of our starters have been starting or playing for 2 or 3 years so all the jitters should be out of the way.

What can be said about this group of Fort Scott athletes in all sports this year?

We got a strong senior class this year in all sports and we have done well. We made it to the Quarterfinals in football and made it to state in Basketball. There's a lot of good athletes in this class and many of us are going on to play in college.

Who are some other players to look out for on your team?

We don't have a weak spot on our team so if I started naming names it'd get pretty long but our whole team is very competitive and could play at the next level.

You chose Neosho County, what other opportunities did you have and why did you choose NC?

Pitt State offered me and there were some other juco's and private schools but when I went on a visit to Neosho I just felt like this was the place for me. They push you to get better everyday.

There really hasn't been an offseason for you or most players on your team, how does that make you a better athlete?

Yeah this year in the summer our legion team won state and made it to South Dakota and we got back like 5 days before we started football practice and then we went from football to basketball and then to baseball with no breaks in between. It helps us stay in shape and focus on what's important and just competing year round in whatever sport it is.

What was it like to play on a field donated by a pro baseball player in Adam LaRoche this season?

It's incredible. When we had the opening day, I think they said around 700 people showed up and Adam and some of Buck Commanders were able to make it, and it was just a fun time. The field and stadium is like something you'd see at some Division 1 programs, and better than some also. The Turf and indoor batting cages have come in handy when it rains so we can still get good work in and play catch.

Fort Scott has always been known as a football town but more recently it seems its becoming a baseball town too, is that because of the success we've seen from Adam LaRoche, youth leagues or a combo of both?

We do have a really good football program and the coaching staff for that is one of the best in the state. A lot of kids look up to Adam and want to be like him so yeah the kids have something to look forward to, getting to play on an dream field that Adam donated.

What style of pitcher are you and how many pitches do you have?

I like to get ahead and spot up so more of my pitches can come into play but I feel comfortable throwing any of them at any time. I throw a 2 and 4 seam fastball, curve, slider, and circle change.

Who do you play for in the summer and what are your plans this summer?

Before this year I've played for the high school legion team, but this year we are switching to a show case team to get a little better competition.

What is your goal at the next level?

I'm looking forward to focusing on one sport year round and being able to get stronger. I plan on taking my baseball career as far as I can.

Coach Regan is an awesome coach. He preaches mental toughness and he pushes us in practice. He knows a ton about baseball and being Adam LaRoche's cousin he gets to talk to him about some of the things they do at the Professional level and we'll do some of those drills.

I love to hunt and fish.