Brett Thompson of Erie is among the nations best in javelin. (Jess Tuck Photography) 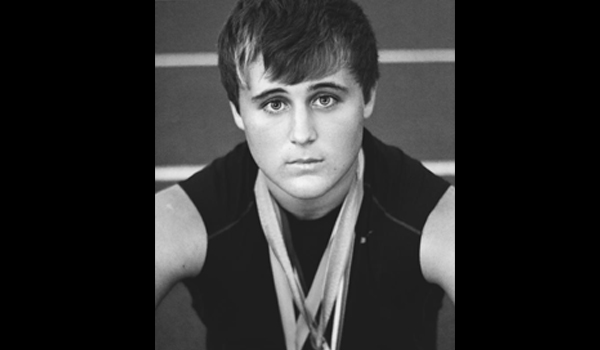 The size of town and school that you go to doesn't have to decide just how good that you are in a sport. Just ask Erie senior javelin thrower Brett Thompson. Thompson, a senior from Erie High School in Erie, Kansas, has the number seven javelin throw in the United States this year. Not bad for a 3A high school with 191 students in a town of of 1,150 in the southeastern part of the state.

"Being from a small town it is pretty crazy to think that you are one of the best in the country at your age at what you do. Not many people can say that especially from a small town like Erie." Thompson said.

Thompson, who is also a baseball player, didn't even start throwing a javelin until two years ago. His throw of 202-05 is #3 in all-classes of Kansas, #1 in Class 3A, just outside the top 25 all-time in Kansas, and the #7 throw in the United States for 2015. Keep in mind, Kansas is loaded in the javelin and features the top javelin thrower in the country in Jeff Ast of 4A Andale, who went 226-2. Thompson took second to Ast in the prestigious KU relays this April, which features some of the best high school track and field athletes around the country.

So how does a kid who never picked up a javelin until two years ago make it into elite territory? That's a very good question because he doesn't do anything specific for training. Thompson has never done any workouts specific for javelin and is something that he has made time for during baseball season.

"I don't do any special training for javelin at all. I workout but nothing is geared for javelin only. It has been hard to train as much as I want to because I also have baseball practice to go to." Thompson said. "This is really the first year I have gotten to practice the javelin."

In fact, Thompson has been struggling with his approach this year, which you wouldn't know it from his outstanding throws, and is doing a three step approach until he wins the meet. He threw 197 at his league meet on a three step crow hop approach, which is something you don't hear of every day.

Despite his elite season and throws, Thompson has seen very few division one schools come after him. It could because he does only one event or that he has came on with a huge senior year after most schools have already extended their offers. He has chosen to further his throwing career at MIAA Champion, Pittsburg State University. We do know one thing, whether its 1A or 6A, or D2- D1, that tape measures don't lie.

"I got mainly Division II offers and some contact from Division I but nothing to serious. It may have been too late in the game for some of the division ones since I am fairly new to being this kind of thrower. It will be interesting when I get into a program and can focus on throwing only." Thompson said.

For now all attention for the Erie senior is set on getting to the state meet this week by qualifying for the state at this weeks regional meet at Bluestem High School in Leon, Kansas. The state meet record for 3A is 193-04 set by John Goldsmith of Cheney in 2004, a mark that Thompson has easily passed this season. Thompson is primed for the state outdoor.

"I have thrown some 210's in practice. My goal coming into season was to get the school record, win state and now it is to get the state record. Seeing thousands of spectators at state will be awesome. Plus it's the largest high school track meet in the nation. Last year it was one of the greatest experiences I have ever gotten to be a part of." Thompson said.

We caught up with him below...

How did you get involved in throwing the javelin?

What were your goals coming into this season?

My goals this season consisted of beating the school record, state track meet record for 3A, and then win the State Track Meet.

Were you surprised how far that you threw this season so far?

Yes, I was very surprised my throw was ranked in the top ten in the country. I was pretty content being ranked #1 in 3A, but definitely not complaining about being nationally ranked.

Coming into the season was over 200 something you saw as a possibility?

I knew coming into the season that if I practiced and tried to fix my technique up that it would definitely be a possibility.  I haven't practiced throwing until this year.

Plans at the next level and what looks have you seen?

I am going to be attending Pittsburg State University for Track and Field.  I gotten mainly d2 offers but nothing too serious with d1.

What is it like to be from small town and be near the best in the country?

What do you to train to throw the javelin, any specific workouts or weight lifting?

What is it like to throw at the state track meet?

Throwing at the State is one of the greatest experiences I've ever been apart of. Seeing over thousands of spectators there just to watch is awesome! Plus it's the biggest high school track meet in the nation.

I also play football,basketball, and baseball.

Do you prefer to throw in front of a large crowd or does it matter?

Throwing in front of a large crowd is pretty cool, because you really get a lot of adrenaline, but I like to block everything out and really focus on my throw.

The state track meet features a runway, obviously, but some meets have grass, what do you prefer?

I definitely prefer to throw on a runway. You never have to worry about footing or it being uneven so my approach will be consistent.  Also we have a runway so that helps a lot.

What should we expect from you at regionals this week?

I would expect me to go out and perform to the best of my ability and hopefully throw well and get another trip to state. I definitely look forward to getting a new pr at one of these last two meets.