Jaylyn Agnew of Andover will look to become just the third girl in KS to win four high jump titles. 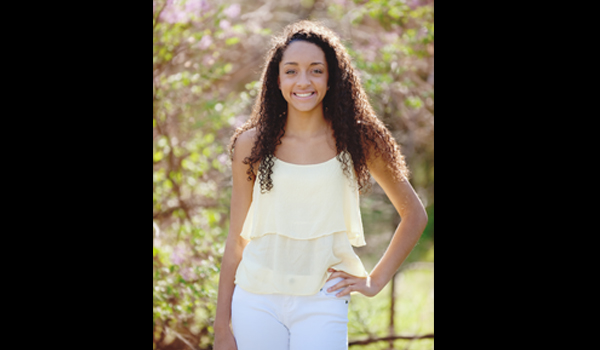 Andover High School senior, Jaylyn Agnew, has enjoyed a lot of athletic success over the last four years of high school. She's an all-state basketball player, who has signed to play with Creighton, an all-state volleyball player and has won the last three state track and field high jump titles.

Although more known as a high school basketball prospect, the most impressive thing about Agnew's athletic career is her success in the high jump. She has never lost a high school meet in the past four seasons, which almost seems impossible.

Agnew will look to become just the third high school girl in the history of Kansas to capture four high jump titles in four years of high school. Cris Hall of Chanute (1985-1988) and Kristi Rinehart of Fairfield (1993-1996) are currently the only two high school girls in Kansas to accomplish that feat.

"It means a lot to know that my name could be in the record books. I have been grateful for the opportunities I have been given." Agnew said.

Agnew also thinks that playing multiple sports has definitely helped in all of her sports, no matter what season she is competing in.

"It helps tremendously and people don't understand how much it can actually help you. There are so many aspects that are involved that aren't for the particular sport that can help you for your other sport," Agnew said. "For example I high jump off my left leg and its the same for a layup. It's actually funny because my Coach (Mike Lee) says, "Dunk the basketball", when I need to jump higher in the high jump."

Agnew, who stands 5'11, has a all-time career best of 5'10 in the high jump, a mark that ranks tied for fifth all-time in the state of Kansas. State record is a ways off at 6-2.25 set by Kym Carter of Wichita East in 1982. However with just a half inch she would move into fourth, a full inch into third and a inch and a  quarter it would move her into the second best all-time in Kansas. Her season best of 5'8 this year is the number one jump in Kansas, but she is not satisfied with the jump.

"My goals this season are to get back up to 5'10" and stay undefeated," Agnew said.

In basketball Agnew averaged 17.4 points per game this past season, earning all-state honors in class 5A. When it came to selecting colleges Creighton was where she felt the most comfortable.

"The city of Omaha reminded me of Wichita so it felt like home away from home. The academics are great as well and the Big East was a more competitive conference than the other schools I was looking at." Agnew said.

For now all attention is set on track and field and getting that fourth consecutive individual state championship in the high jump.

"The state track and field meet is so awesome, there is nothing like it. There isn't anything to describe the emotions that go on during the time that you are at the state meet." Agnew said.

Agnew will be at the 5A Emporia regional this Thursday where she will look to remain undefeated in the high jump. State track and field is May 29th and 30th at Cessna Stadium in Wichita. The 5A girls high jump is scheduled for 8:00 am on Championship Saturday.

We caught up with Jaylyn below..

How did you get involved with track and field?

In middle school, there was an option to do a spring sport so I just decided to do track. My dad did it in high school so I decided I should try it.

What does it mean to you that you’ve won so many events in high school?

It means a lot. To know that my name could be in the record books makes me proud of myself and grateful for the opportunities I have been given.

What were your goals heading into this season and what are they as you head into regionals?

My goals this season were to stay undefeated, get back up to 5'10" and get my last state championship. My regionals goals were the same.

How does being a multi-sport athlete help you?

Being a multi-sport athlete helps tremendously. People don't understand how much it can help you. There are so many aspects that are involved that aren't only for the particular sport that I'm competing in at that time. For example, a simple right-handed layup has helped me with high jumping. I high jump off of my left leg and it's the same for a layup. It's actually funny because my coach (Mike Lee) says, "Dunk the basketball!" when I need to jump higher for one of my jumps.

What do you do to train, anything specific?

To train, I just do our workouts that our coach has set up for us. Also, once a week my dad will do a little workout for me to work on my explosiveness for the upcoming meet.

What led you to choose Creighton, any other offers?

I just felt the most comfortable at Creighton. The coaches and players were all so nice and the city of Omaha reminded me of Wichita so it felt like a home away from home. The academics are great too. Also, the Big East was a more competitive conference than other schools I was looking at so that helped me decide to go there. Yes I had other offers, I narrowed it down to Creighton, Drake, Wyoming, and Tulsa as my top four.

How awesome is it to compete at state track and field?

It is so awesome, there is nothing like it. It's hectic and there are so many things going on but that's what makes it great. There are also so many people there and that makes it more exciting too. There isn't anything to describe the emotions that go on during the time that you are at the state meet.

What is your most memorable moment in high school?

Hmmmm, that's a tough one. My most memorable moment would probably be winning my first state championship. There was so much adrenaline and I was so nervous. Even after I had already won and decided to go to higher heights, my stomach was still in knots. I don't think I stopped being nervous until I got home that day!

What will you have to do to adapt to play at the college level?

The college game is so much different than high school. I'm going to have to get stronger and faster to be able to compete with the girls of that caliber.

What are your plans for this summer, training wise?

I'm actually going up to Creighton for the month of June to do workouts.

What is it like to grow up in the Wichita area?

Growing up in the Wichita area has been fun. I've gotten to know a lot of people from so many different walks of life and I have played with so many people that it will be hard to leave when the time comes. But I am so grateful and thankful that I grew up here.

What do you plan on majoring in for college?

I plan on majoring in something to do with business. I haven't exactly decided what path yet but definitely business.

The average person doesn't know that I love to sing but I'm probably the worst singer I know!