Braden Anderson of Labette County HS is among the states top players this season. (submitted photo) 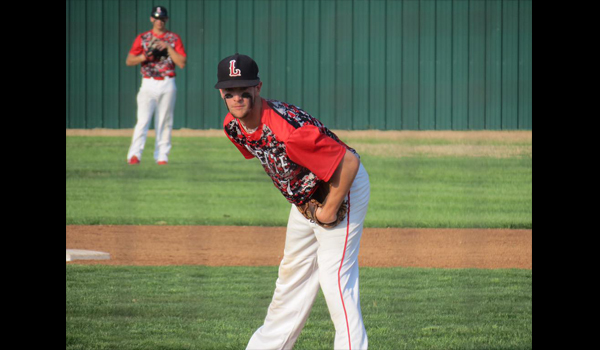 The Labette County High School baseball team, led by head coach Jesse Ybarra, is enjoying more success than it ever has. The Grizzilies won a share of the SEK League Baseball title, becoming the first baseball team in their school history to do so. They also have been ranked as high as #1 in the state of Kansas this year, also a first for the program.

A big reason for their success this season has been senior pitcher Braden Anderson. Anderson, who has a 7-1 record on the season, has struck out 67 batters in 50.1 innings pitched. In his only loss this season, which came against Parsons, he struck out 15 setting a school record for strikeouts in a game.

"My team behind me has played extremely well, which has really helped my confidence as a pitcher," Anderson said. "It allows me to relax and do my thing."

Not only are Anderson's numbers very impressive this year, it's who he's done it against. Five of his seven wins have came against teams that have been ranked at one point or the other this season (Baxter Springs, Coffeyville, Fort Scott, Frontenac, Pittsburg).

Anderson is a placement pitcher, but still shows great power on the mound being clocked in the 83-84 MPH range this season.

"The majority of the time you cannot just blow it past someone, but I've learned to locate it very well. I change speeds well and when I go through my mechanices it all looks the same, whether throwing a 4-seam fastball or an off speed pitch." Anderson said.

Pitching is just one part of his game, as Anderson also boasts a batting average of .419 this season, picking up 26 hits this season in 62 at bats. He has signed to play next season at Cowley County Community College. Cowley, who was ranked #1 by the NJCAA for the majority of the baseball season, finished with a 54-5 record this season.

"I immediately felt the connection with the coaches when I went to visit there. The history of the program has always been successful." Anderson said.

"Being able to wear my dads jersey I feel like there is a part of him out there with me. It's special because only my brother and I can wear the #7 jersey. When my brother graduates, the number will be retired again. So it's a family thing and a privilege." Anderson said.

The Grizzlies (16-4, 9-3 SEK), ranked fourth in the final KABC regular season poll in 4A-I, open up regional play today against the winner of Chanute and Independence at 6:00 pm at the LaRoche Baseball Complex in Fort Scott. If the Grizzlies were to pick up an opening round win they would face the winner of Coffeyville and Fort Scott for a 4A-I state berth on Tuesday. Fort Scott is also ranked, currenlty at #2 in 4A-I.

Special Thanks to Labette Bank, Bartlett Co-op and Stockyards Travel Plaza for sponsoring all LCHS features this season with Sports in Kansas.

This season has been a dream come true. I’ve always wanted to be a part of a team who really accomplished something this year. My team behind me has played extremely well, which has helped my confidence as a pitcher, to just relax and do my thing. When you do not have to worry about if a hard hit groundball can be fielded really takes a lot of the pressure off your shoulders. I always said I wanted to leave my high school baseball season with a record, and we have 3. As a team, We were the first baseball team to Win League, and then first team from Labette County History in all sports to be ranked #1 in the state. And then on a personal note, I now hold the personal Single Game Strikeout record at 15.

Was this season a bit of a surprise for your team?

Was this season a Surprise? For me my answer to that is no, it wasn’t, we as a team knew what we were capable of doing, all we had to do was go out and do it. However what was the surprise of the season would be losing Will Owens our starting 3rd baseman from last year who had the highest batting average on the team to a torn ACL playing Substate Basketball, and then losing  Austin Yanez  our Starting Centerfielder mid-season to a torn labrum, who had the highest batting average this season. So filling those positions was a surprise. But have had other players step up and contribute. Senior transfer Sam Vratil from Parsons HS was able to step in and help contribute to our teams success. Freshman Pryce Anderson has started in right field this season and has played very well. He was able to get the walk-off bunt down against Fort Scott.

Who are some of the players that have stoodout this year?

Our Senior Catcher, Parker Grant has really stepped up his game, both behind the plate and hitting wise. Parker has caught every inning for us this season, He’s the hardest working player on the team and he has kept us in games where I have buried a ball and he came up with a great dig. He is also leading our team in batting average this season. Very rarely does he not put the ball in play somewhere, he goes to the plate with an idea of what he wants to do and executes.

Senior Pitcher Jake Mattox has had an outstanding year on the mound. Jake has thrown two no-hitters on the season and has a very effective curveball. He is pretty tall and lanky and hides the ball well when he delivers, making it harder for hitters to pick the ball up out of his hand. Jake will be playing at Independence CC next year for Coach Schultz.

Junior, Kaleb DeLaTorre from Fort Scott. Kaleb has always been great competition to pitch against. Kaleb has the power  to hit balls a long ways and has a very good situational approach. I consider him to be the best hitter I have faced this season. He has a very bright future ahead of him in the game of baseball.

What are your goals as a team?

Our number 1 goal was to win league, win regionals, and make state. We did finish first in the League, but also shared that title with Pittsburg and Fort Scott. We are the first team to Win League in LC History so that was a good feeling.

Executing every opportunity we are given.

Quality Performance From the Pitching Staff

Give it your all every pitch of the game.

How well will you have to play to get to the state tournament?

To get to the State Tournament were going to need to swing it like we started off, we are watching to many good pitches at the plate. If we continue to play defense and pitch like we have been, that will help us tremendously.

I played football my first 3 years then decided I was going to sit out my senior season. I recognized that football was not going to pay for my college and there were things that I needed to work on as a baseball player and I knew playing under Paul Minor and Steve Lienhart for the Wichita Reds Organization would help me fulfill my goals to play College baseball.

Why did you choose Cowley, did you have any other looks?

Cowley’s baseball program and the history of the program has always been successful. When I went for my visit there I immediately felt a connection with the Coaches Dave and Darren Burroughs. I felt they were going to bring the most out of my potential.. God has for sure blessed me by giving me the opportunity to play for a place like Cowley.

All were great schools, but Cowley just felt like the right place to be.

What type of pitcher are you ?

Throwing 83-84, the majority of the time you cannot just blow it past someone, but I’ve learned to locate it very well. I stay on the corners for the majority of the at bat. I change speeds well and when I go through my mechanics it all looks the same, whether throwing a 4 seam fastball, or an off-speed.

What is it like to play for Coach Ybarra?

Playing under Coach Ybarra has been a great experience. As a coach he makes us tough mentally. He is a hard-nosed, old school coach who will tell you how it is and doesn’t really care if you like it or not, which I think has helped me become a tougher player mentally. I am a better player because of Coach Y. I have grown to have a deeper appreciation of his style of coaching over my four years.