v Washington County's Hodgson moving into elite territory - Sports in Kansas 
Warning: include(../includes/bodytag.php): failed to open stream: No such file or directory in /home/kansass/public_html/ks/news/index.php on line 36

Dylan Hodgson of 2A Washington Co. has the top 1600 time in Kansas. (courtesy photo) 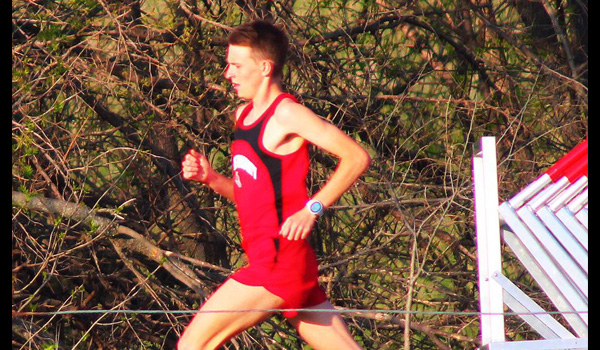 If you went to the state outdoor meet in Wichita last May, there's a pretty good chance you saw Washington County's Dylan Hodgson. Hodgson, then a junior, set two state meet records (1600, 3200) in 2A at the state track and field meet.

The 1600 and 3200 were definitely his best races last year, but the 800 may have been Hodgson's best win at the state outdoor. After trailing much of the race, Hodgson won at the finish line to capture his third and last state title of the season with a 1:59.55, edging Ellinwood's Kyle Oglesbee (1:59.56) in one of the closest races ever at the state outdoor.

But last year is old news and Hodgson, now a senior, is ready to break more records this season. He has a legitimate shot to break at least two state records and perhaps three, which only one isnt his (800), at the state outdoor. His time of 4:15.61 ranks #1 in KS this year and would easily beat his time of 4:22.73 at state last year. The crazy thing is Hodgson ran the 4:15.61 solo, meaning nobody to test his limits.

Don't be surprised if you see Hodgson run under a 4:10 this year with some compeition at the state outdoor. No high school boy in Kansas, in any classification, has ran under a 4:10 in the 1600 meters since 1982. When we asked him about the possibility of under 4:10, he didn't say it wasn't a possiblity.

"State is going to be big for me. I don't see why that wouldn't be a possibility, I am ready to run something crazy and it could be possible with my mile-specific workouts." Hodgson said.

Normally Hodgson would see great competition each and every week at his small 2A high school. This year has been different for Hodgson as he has had to run solo at most meets because of the injury of 1A star, Caden Callway of Pike Valley, another one of the best runners in Kansas. Calaway, a Wichita State signee, and Hodgson, a Kansas signee, live about 40 minutes apart, train together and are very good friends. Callaway's injuries have hampered him all year but he registered a 3200 mark in the 9:30's this  past week. One may think if these two had raced all year their times would have exploded.

"My injury is getting a lot better. I ran my first race of the season last Friday." Callaway said.

Callaway and Hodgson won't get to race at state as both are in different classifications with Callaway in 1A and Hodgson in 2A, but they will both be rooting each other on.

The 2A field will be loaded at this years state meet and Hodgson will have some of the states best competition. Crazy to think for 2A, right?  Sophomore Kyler True of Olpe has registered a 1600 at 4:18, while running an 800 in 1:55. There are four total 2A runners in the 800 meters under two minutes, something you don't see every year.

"I want to win all the races I won at state last year, but the mile has definitely been my focus all year and will be. I have a lot of summer races and hopefully U.S juniors coming up as well."