Kaylee Bogina thought she would never run growing up, now among the states best. (courtesy photo) 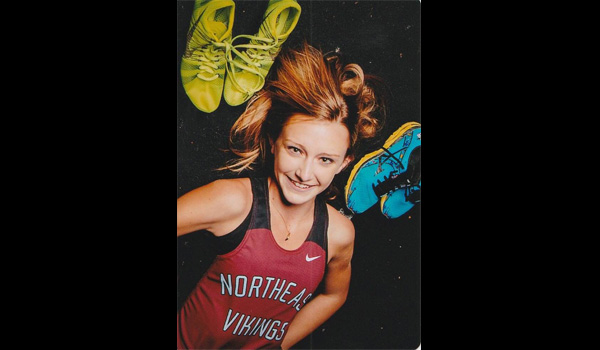 Kaylee Bogina, senior runner at Northeast-Arma High School, located in the Southeast corner of the state, has quietly became one of the state’s best runners over the past three track and field seasons.

However, it wasn’t always success for Bogina and it definitely wasn't expected. She has battled Chron’s disease for years and was diagnosed with it when she was nine years old. Chron’s disease, according to the Mayo Clinic website, is inflammation of the lining of your digestive tract, which can lead to abdominal pain, fatigue, weight loss and malnutrition.

“Chron’s gave me a tough childhood. If you would’ve told me when I was nine I would one day be a runner, let alone a state champion I would’ve told you that you were insane.” Bogina said.

Bogina is not just a state champion, she is a four-time state champion that has overcome unthinkable obstacles. Winning the 3200 meters the last two track and field seasons, the 1600 meters last season, and added an individual title in 3A cross country this fall. Not bad for someone who thought they would never run competively and that finished 11th and 12th out of 16 total in her classification the state as a freshman just three years ago.

“Freshman year was a huge learning year for me. I was happy how I competed in the SEK area, but once I got to state I was disappointed on how I finished. I set my goals after that year that I would become a state champion.” Bogina said.

This season Bogina has taken on an ever bigger role as one of if not the state’s best 3200 meter runners. Northeast, who has an enrollment of 162 students in 3A, is a very small high school compared to the schools in 6A that have 1,100-2,400 kids. School size doesn’t seem to phase Bogina as her time of 11:14.32 is number one in the state of Kansas for all-classifications. In fact, her time is currently seven seconds better than anyone else in Kansas at this point of the season. Her 1600 time of 5:11.50 is the second best time in all-classes of Kansas. Her training this off-season has definitely paid off.

“I also play basketball in the off-season of track, but I trained as much as I could. I worked a lot on flexibility this year. I think it will really allow me to become faster and recover better.” Bogina said.

Bogina officially signed her letter of intent to run at Division II power Adams State University this week, despite having the opportunity to go to a few division one schools. Adams State is located in Alamosa, Colorado, and competes in the Rocky Mountain Athletic Conference. Adams State has won 15 NCAA-II Cross Country Team Titles since 1992 and two indoor track and field titles in the past eight years, all under head coach Damon Martin.

“My brother went to a distance camp there his senior year of high school and I knew they were a national caliber program and that is what I wanted,” Bogina said. “Coach Martin is one of the most incredible individuals I have ever met. He makes all of the things I have dreamed about achieving seem real.”

“My whole family is involved in running. My grandparents come to every meet or watch online if they can. My aunt has coached her son, my brother and I. My dad and mom help me on the weekends by biking with me while I run.” Bogina said.

Bogina isn’t the only runner turning heads in the Southeast Kansas area this season. Girard’s Cailie Logue, who is the Gatorade XC Athlete of the Year in Kansas, has the fastest 1600 in the state this season. St. Paul’s Jenny O’Bryan is a state champion in the 1A distance and Fort Scott’s Cassidy Westhoff has the third fastest 1600 in all-classes behind Logue and Bogina.

“This area is incredible right now for distance running. When you get Cailie, Jenny, Cassidy and I together to race you should expect some pretty fast times.” Bogina said.

For now it’s concentrating on getting her fifth and sixth individual state titles for Bogina at this years state outdoor in Wichita.

“There is nothing like state track. Getting to race for over 20,000 screaming fans is unreal. I want to set more PR’s, this year is all about making a statement.” Bogina said.

Special Thanks to the Northeast Viking Booster Club, Craw-Kan and Jeff Mills of Napa Pittsburg for sponsorship of this feature.

How did you get involved with running?

I have always grown up around running. My brother Austin ran a lot of races when I was little so I would always be there to watch him. I started running in 7th grade on the jr. high track team. When I got to high school was when I started to get serious about it. I did not do cross country as a freshman so I first started with track that year. I went from a kid who hated the idea of running, to a kid who couldn't wait to get to practice and get better.

How much have you improved from your freshman season to now?

Freshman year was a huge learning year for me. I did really well at all the meets around my area that I went to. I was really happy with my season until I got to the state meet. I never once thought that there could be better girls than the ones that I had raced around my area. I end up getting 11th and 12th that year. I took that pretty hard and after that I decided that one day I would be a State Champion. I think that if I didn't have that rough freshman year, I wouldn't appreciate how far I've come. I learned that I didn't want to just be good around SEK, I wanted to be the best in the state.

How important has running been to your family?

My whole family is involved in running. My grandparents come to every meet and if they can't they try to watch it online. My aunt coached her son, my brother and I. My dad and mom both help me on the weekends by biking with me while I run. Each and every member of my family has been there through every step of my running career.

What is it like to have an aunt, that is your coach, push you each and every day to become better?

My aunt and I are so close, and so everyday I know I have to work hard for her. There is no better feeling then winning a state title and getting to share it with my aunt. She has coached me through my good races and my bad races. I wouldn't be where I am today without her.

How has training went for you?

Training has been great! I seem to understand running much better this year and I have really worked hard to push myself to the next level to achieve some big goals that I have set for myself.

I trained as much as I could, since I played basketball as well. I really worked on flexibility over the off-season. I truly believe that it will help me to become faster and recover better. I ran an indoor race at the University of Arkansas this winter and it was a really good experience for me.

You chose Adams State to run, what led you there?

My brother went to the Adams State distance camp his senior year of high school and I knew that the program was a national caliber program and that was a big thing I wanted. Coach Martin is one of the most incredible people that I've ever met in my life. He makes all of the things that I dream about achieving seem real. It was my first visit that I went on and after that I just compared every other visit to them.

How big was it for you to win state cross country this year, as it was your fourth overall individual state title?

Out of all of your state titles, what is your favorite?

Thats a hard one. Each one was so special because of all of the hard work put into achieving it. But if I have to pick one I'd have to say winning the 1600 last year was my favorite. I never saw myself as being fast enough to win that race. I knew that there was a big group of us who were running just a few seconds apart. Coming down the last 100 meters was unreal because of the amount of people who were screaming. I will never forget hearing the announcer say "and here comes your 1600 meter state champion Kaylee Bogina."

You've battled Crohn's disease while being an elite runner in KS, what has that been like, has there been any major setbacks?

Crohn's gave me a tough childhood. If you would've told me when I was 9 that I would one day be a runner, let alone a state champion I would've told you that you were insane. I have been very lucky to be able to run and manage my Crohn's. I think that I have learned to appreciate a lot of the things that I've done because of having this disease.

I want to run fast. I want to go to big races because I know that I will run faster times. I expect big time PR's for me this year. This year is all about making a statement.

Just how good is this SEK area in distance running with you, Cailie Logue and Jenny O'Bryan?

The SEK is incredible for distance running. Jenny and I are in the same league so when it comes to our league meet its still really competitive. Also with Cailie, not many kids get to say they race the girl that ran a 4:59 1600 every single week. When you get Cailie, Jenny and also Cassidy Westhoff from Fort Scott, and I all together to race you should expect some pretty fast times. The neat part is when we all race, we have 3 state champions and a top 3 state runner all in the same race.

How would you describe the state outdoor to a fan that has never been?

There is nothing like state track. Getting to race for over 20,000 screaming fans in unreal. You get to watch the best of 1A-6A all on the same track.

How did basketball go for you this year?

It was a great way to end my basketball career. Our team had the best season in the history of our school and I was lucky enough to get to set the all time scoring record.

When you are not running, what do you like to do for fun?

I really enjoy naps. Haha. But if I'm not running I'm usually out watching my brother compete at a track meet.

I enjoy math. Math is really challenging so it always keeps me busy.

What is it like to grow up in Arma?

I love my little town. Everyone is so supportive of everything. There is not a ton to do around here so when there is a sporting event there is usually a good amount of towns people that come and watch.