Inside look at the 2A Girls State Tournament

Colgan, led by Alex Minton, enters state as the #4 seed. (photo: Will Ravenstein) 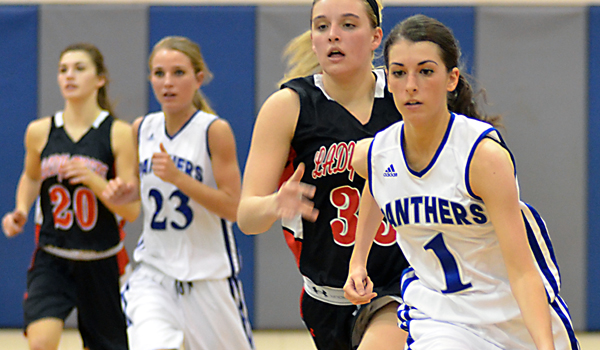 The Lady Chargers may have lost eight games, but they play much better than their record shows.  Most of their games they’ve lost have been relatively close.  They split with 3A State qualifier Silver Lake this season.  They’re led by Cara Flatch who averages 20 points per game.

The Lady Panthers, led by head coach Abby Farabi, come into this State Tournament with only two losses and still have the #4 seed, which shows how deep this tournament is. SMC is undefeated against Kansas competition and play in a 3A/4A league in Southeast Kansas. Returning 2A all-stater Alex Minton and Allie Story lead this squad. They’ll look for their first State Title on Saturday.

The Lady Buffaloes will have a big first round matchup on Thursday night as they face a tough St. Mary’s Colgan team.  The Buffaloes have played undefeated Cimarron this year and barely lost, so they have a good team that will look to go far in this tournament.  They’re led by senior Bailey Olvera who averages almost 16 points per game.

The Lady Dragons come into the State Tournament averaging just over 50 points per game, mostly relying on their defense to get the stops and help lead them to wins.  They’re led by junior Ali Brown who averages just over 11 points per game.  They’ll look for their first State Championship this weekend.

The Lady Ringnecks are a well balanced team, they look to get the ball to the open player to get the baskets, as they average over 10 assists per game.  After losing their first two games of the season, they’ve been on a role.  They’re led by freshman Conner Keith who averages just over 13 points a game.

The Lady Wildcats had to deal with losing their top two players from last years team, as they were in a rebuilding process towards the beginning of the season.  Once they figured out what talent the team had, they have almost been unstoppable.  They’re led by junior Ashley Holler who averages 16 points per game.

The Lady Bulldogs will have a tough matchup with Moundridge on Thursday as they look to pull off the upset.  They defeated Remington earlier this season who has qualified for the 3A State Tournament, so the Bulldogs can play.  They’re led by senior Cassidy Kelsheimer who averages nearly 14 points a game.