v Inside look at the 6A Girls State Tournament - Sports in Kansas 
Warning: include(../includes/bodytag.php): failed to open stream: No such file or directory in /home/kansass/public_html/ks/news/index.php on line 36

Inside look at the 6A Girls State Tournament

Koch Arena is the site for the 6A state tournament in Wichita. (photo: WSU Sports Information) 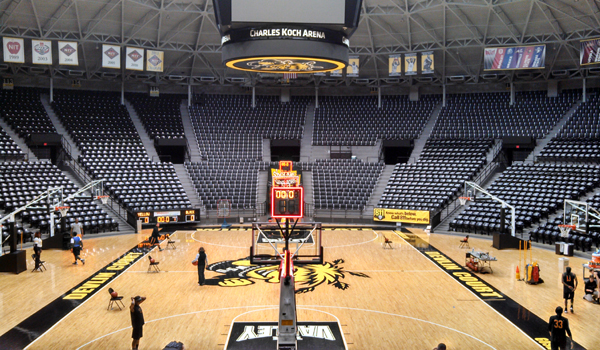 The Lady Indians are led by senior Caroline Ballard who is averaging nearly 15 ppg.  Manhattan is back to the state tournament after taking 4th place last year, the Lady Indians came into the State Tournament last year as the #1 seed, this year they head to Koch Arena in Wichita as the #5 seed.

The Lady Blues are back to the State Tournament looking for their second State title ever.  They’ve had quality wins over 5A state qualifiers Emporia, and Topeka Seaman.  They’re led by junior Jordyn Musselman and senior Paige Cunningham.

The Lady Eagles are one of six undefeated girls teams left in the state as the State Tournament approaches.  They’re a strong team both from behind the perimeter and in the paint.  They’re led by senior Keiryn Swenson who signed to compete in track and basketball at the University of Arkansas, and senior Daley Handy who has also signed to play basketball at the University of Wyoming. Maize took second in last years 6A state tournament to Wichita South.

The Lady Falcons have had winning seasons for the last decade, including a state championship win in 2010, they look to go all the way again this year.  They’re led by senior Kylee Kopatich who has signed to play at the University of Kansas next winter.

The Lady Huskies are back to the State Tournament for the first time since 2011.  They’ll have their hands full with Maize in the opening round on Thursday, but if the Huskies can pull off the upset, they’ll have a lot of momentum going for them.

The Lady Cougars have some quality wins over some really good teams in the Sunflower League.  They’ve knocked off Leavenworth who is the #2 seed in the 5A State Tournament, earlier this season.  They’re led by senior Sydney Thompson.

The Lady Vikings are looking for their first ever state title as they enter the Class 6A State Tournament as the #3 seed. They have a quality win over other 6A qualifier Blue Valley NW.  They’re led by senior Paige Henderson and junior Alyx Kemp.