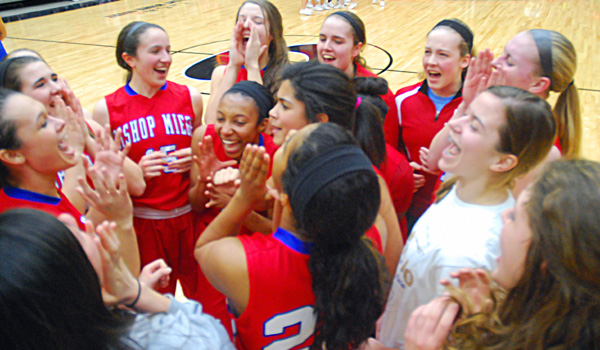 A look at predictions of all eight classifications of girls basketball in Kansas. Our statewide experts decided to have a little fun and break down who they think will win titles this weekend.

Maize may be the favorite on paper at this point, but Wichita South is the two time defending state champion. Look for a rematch in the title game here. Olathe South is also a headliner in this division. It seems to be pretty wide open with those three schools. Also look for Shawnee Mission Northwest who has an outside shot to upset any of these teams, however may not seem like an upset to them as they beat 5A power Leavenworth earlier this season.

Defending champion Leavenworth has played very solid basketball all year knocking off several quality teams but have stayed under the radar because of two losses. However those losses are to two teams competing in the 6A tournament. Leavenworth, who featured three division one signees, is the real deal and Aquinas will be a challenger to the Pioneers.

Bishop Miege won the first ever 4A-I state title a year ago and it’s looking like they are the heavy favorite to win their second. Terry English is in his 38th year and going for his 18th state title at Miege. Paola is also a very solid team to watch for with a perfect record on the year

Should be pretty wide open for anyone here in 4A-II. This classification still trying to get an identity in its second year with teams moving up and down classifications. Baldwin seems to be the heavy favorite as they play very good competition out of the Frontier League.

Defending state champion Hesston is the team to beat in the 3A state tournament and hasn’t lost since the 2013 basketball season. Cimmaron is also undefeated and may be Hesston’s biggest contender. All of our pickers agree on the title match-up, however last year the eighth seed (Lyons) ended up in the title game.

Central Plains, who all of our pickers picked to get second last year, proved us all wrong by defeating Jeff County North in the title game. It will be hard to pick against Central Plains, who has only one loss on the season. Pat Stiles will look to defend his 2A state title. Moundridge has two losses, one of those by two to Central Plains.

Hoxie is the story here as they haven't lost since December of 2011. The state record 92 consecutive beat Little River’s all-time mark of 91 (1994-1998). Shelly Hoyt will be looking for her fourth consecutive state title. Carly Heim is one of the best small school players in Kansas and has only lost one time in her career. St. Paul is a serious contender as is Waverly. St. Paul is also without one of 1A-Is best player in Jordyn Tuck as she was injured in volleyball, but do feature Ashton Wood and Josie Albertini.

Gone is Baileyville B&B who closed their doors last May just two months after winning their last ever 1A-II state basketball title. St. Johns Tipton is a serious contender here and are led by the play of sophomore Brenna Eilert. Also look for Moscow as their only two losses came to state tournament qualifiers in bigger classes (Central Plains, Ingalls). Just like 1A-I are pickers weren’t much fun in this one as they all agreed