Hartman Arena in Park City will be the 4A-II site. (photo: Chet Kuplen) 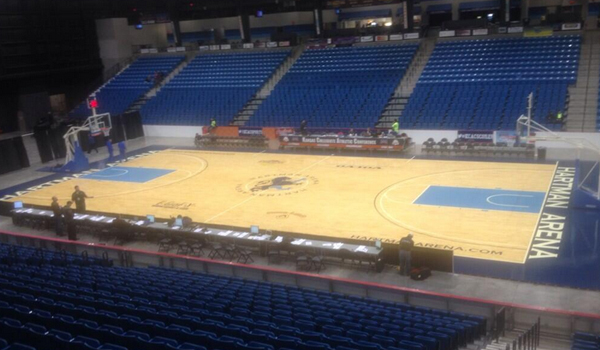 Wichita East and Lawrence have been the talk of this classification all season. Clay Custer (BV Northwest ‘14) and Perry Ellis (Wichita Heights ‘12) had a hand in the last six state titles and both are now gone. We will finally have a new champion in 6A.  All of our pickers agree on who will be in the title game and if that happens it will be a rematch as Wichita East handed Lawrence their only loss this season.

5A looks to be wide open in 2015. Wichita Heights is a battle tested team, as is Kapaun in the city league. Maize South has been very impressive as well. Shawnee Heights is a question mark team to some out of their area, but has really dominated in the Topeka area.

McPherson and Basehor Linwood seem to be stealing all the hype here as they should be. Both are undefeated and are regulars in the title game. McPherson will be your favorite but the best team all year doesn’t always win the state tourney in survive and advance mode. Many were talking Independence all year, who could very well compete at this tourney, and they were knocked out in round one of sub-state. Also keep a look on Andale and Ottawa as they both are very dangerous teams.

Wide open is the first thing that comes to mind for this classification. Gone are all four teams who placed in the top four last year, three up/down a classification and another knocked out in sub-state. Holcomb seems to be generating a lot of hype in this classification. It wouldn’t surprise anyone if the seventh or eighth seed will be playing for or winning a state title.

This is an absolute loaded classification. Many think it may be the toughest as it’s the states largest classification with 64 members. Scott City has won the last three state titles they’ve played in 3A, after they took second in 4A-II last season. Collegiate, Hesston, Sabetha all have great resumes in this tournament. Even Riverton, the eighth seed, is a legit contender as they returned nearly everyone after taking fourth last year.

St. John is again the team to beat in this classification. The Tigers won 1A-I two seasons ago and 2A last season. They feature all-state senior, Dean Wade (6-8 Forward), who has signed with Kansas State. Central Plains and Olpe are also big time contenders in this classification. We may see the seventh meeting between Central Plains & St. John for the championship on Saturdayas SJ has won all six previous matchups.

Hanover, who enters with a 22-1 record, is the team to beat in 1A-I this season. The Wildcats should get to the title game it’s just a matter of who they will play. All of our pickers seem to think it will be Stockton as the runner-up, who is the #2 seed at 16-6.

St. Johns Tipton has been the talk of 1A-II over the last few seasons. They are one of the best three point shooting teams in Kansas. This team has a lot of depth and features the Dubbert brothers. Senior, Trey, the 1A-II player of the year, and sophomore, Davis, are two of the best players in 1A-II this season. They will have some challengers this year with the target on their back in Sharon Springs-Wallace County. Wallace County lost to St. Johns Tipton by two in last years 1A-II title game.