Inside look at the 1A-II Girls State Tournament

1A-II State Tournament will beging on Wednesday in Dodge City. 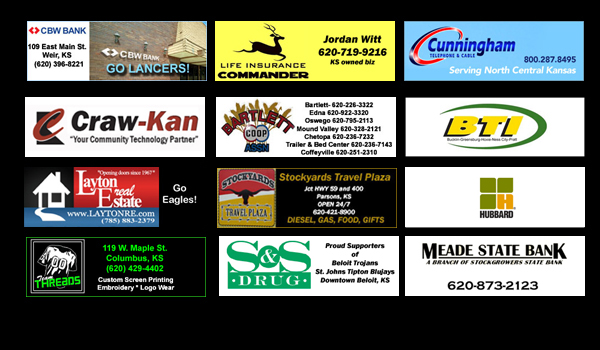 See audio link at the bottom for audio/radio preview

The Lady Eagles have qualified for the State Tournament for the third time in the last four years.  They’re a young team and all play together.  They’re not led by any particular player as they play as a group.  Norwich will look for it’s first state title in girls basketball.

The Lady Chieftains return to the State Tournament for the first time since 2008, in which they took 3rd place.  They’re a low scoring team, but have a lot of weapons to use.  They will look to claim their first state title in school history.

The Lady Wildcats are headed to the State Tournament for their first ever State Championship.  They are on a three game win streak and will face Sylvan Grove in the first round of the State Tournament on Wednesday.  They’re led by junior Kelsi Mueller who averages close to 20 points per game.

The Lady Bluejays head to the State Tournament as one of the favorites to win it all in class 1A-I.  They just need two wins to tie the record of wins in one season for the Bluejays which was set in 2011.  They’re still searching for their first state title, hoping to get there led by sophomore Brenna Eilert.

The Lady Cardinals will enter the State Tournament with the #7 seed and will have a tough matchup with #2 St. John’s-Tipton in the opening round.

The Lady Thunderhawks may have one of the best mascots in the state, and one of the best girls teams this season in 1A-II.  They’ll look to claim their first State Championship since 1983.  They’re led by sophomore Bailey Bixenman who averages just over 11 points per game.

The Lady Wildcats enter State Tournament play with a big game vs Wheatland-Grinnell in the #4 vs #5 matchup.  The Lady Wildcats will have to rely on defense, which has struggled in their losses this season.  They’ll look to claim their second ever state title this Saturday.

The Lady Mustangs will have a tough game to open up State with as they play the #1 seeded Moscow team.  They keep improving year after year and will look to win State for the first time since 1993, and hope to win the school’s 3rd ever State Title.