Hoxie girls look to make more history on Saturday as they go for 92. (courtesy photo) 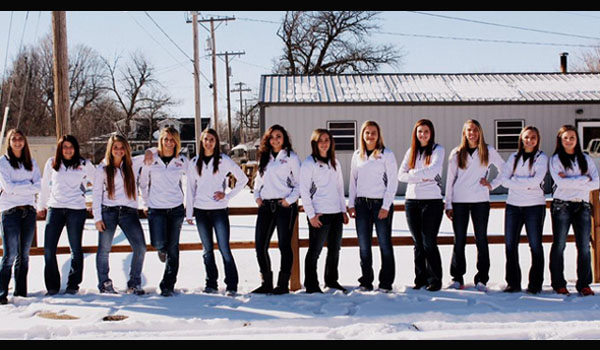 "It's a great accomplishment, but our team goal is to win state." Hoxie girls head coach, Shelly Hoyt said.

Hoxie, who has won the last three 1A-I state titles, has a perfect 21-0 record on the season. Coach Hoyt's focus hasn't been on counting the consecutive games. When we talked to her earlier this season, she wasn't even sure how many consecutive games they had won. In fact, she doesn't really care to talk to much about it at all, probably a big reason for their success of taking it one game at a time.

"I'll tell you its tough. People forget we are dealing with young kids. We don't talk about it at all at practice," Hoyt said. "You know the minute they walk into the community or somewhere else someone else is going to say something to them." Hoyt said.

Hoxie is 121-3 dating back to when the 2010-2011 season started in December of that year.The Indians have played in four consecutive state championship games, winning the last three. The freshman,sophomore and juniors at Hoxie have never lost a basketball game, even senior standouts, Carly Heim and Lexi Schamberger, haven't lost since their freshman year in December of 2011.

Little River's now tied state record of 91 consecutive wins, under Shane Cordell, went from 1994-1998. Little River, who played in 1A, mark is so impressive because they won over 5A state powers like McPherson and even knocked off the states best player of all-time,Jackie Stiles, of Claflin. Even Stiles knows how good those Little River teams were.

"It's an incredible record. They were such a good team. They had Nicky Ramage who played at Kansas State, two sets of twins. They had several who went on to play in college. It was a lot of fun playing against them even though we could never beat them." Stiles, now an assistant basketball coach at Missouri State, said.

Hoxie will look to beat the record on Saturday as they take on Stockton (13-8) for a berth to the 1A-I state tournament in Emporia. The Indians are just 32 minutes away from taking Little River out of the record books.

"Again, we want to win state and there is a lot more work to do. " Hoyt said.