Taylor Watkins of Columbus looks to capture the 170 lb. title this weekend.(photo:Carolyn Eddington) 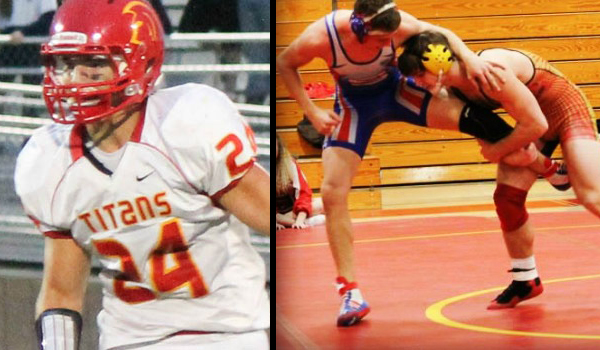 Columbus senior Taylor Watkins has enjoyed quite the success over the last four years of his high school career, however in the last year it has been really good. He captured the 4A state wrestling championship last winter at 160 pounds, was an all-state linebacker this fall in football for the 4A-II runner-up Titans, and now enters state wrestling this weekend as the #1 ranked wrestler at 170 pounds in 4A.

Watkins, who is 36-1 on the year with his only loss coming to a Missouri state champion, didn't just roll out of bed and become a state wrestling champion last year. After taking third as a freshman and sophomore, he won it all last year and will aim for his fourth consecutive state medal this weekend. The dedication, hard work and extreme mental toughness over the years has helped prepare him into one of Kansas bests.

"I have put in an extreme amount of work, but I love to work out. I am not satisfied and am always wanting to become better. I'm the type of guy who is constantly thinking of what I can do to improve," Watkins said.

Watkins is your typical wrestler build at about 5'8 and 170 pounds, but not your prototypical build for an all-state linebacker. His numbers in football say it doesn't matter what size he is, as he led the Titans with 140 tackles on the season.  Watkins helped Columbus to their first ever state championship appearance, taking second to Andale in 4A-II. He was a first team all-state linebacker and was selected to play in the Kansas Shrine Bowl this summer. Even opposing coaches noted that Watkins was the best defender they had seen all season.

"Wrestling and football go hand in hand for me. I think it definitely makes me a better athlete being able to play both. The only difficult thing is gaining weight and strength for football and trying to maintain that strength while making weight in wrestling." Watkins said.

Although a stud on the gridiron, Watkins first love is on the mat and that's what he intends to do in college. But for now there is only one thing on his mind and that's to bring home a second consecutive individual state wrestling title.

"Obviously I want another state title bad, but I also want to help our other qualifier (Nate Thomas) get on the stand."

Watkins will take on Tonganoxie freshman Devin Duncan (5-4) on Friday at the 4A state championships in Salina. Although he will be the favorite to win the title at 170 pounds, the bracket also features Josh Miller of DeSoto (39-2). We caught up with Taylor below.

Special Thanks to Team Threads & Farmers Coop for sponsoring all Columbus Titan coverage w/ Sports in Kansas this school year.

My mom just asked me if I wanted to start competing in different sports and I jumped on the opportunities.

How has your senior year went so far, you have to be pretty pumped after the way football turned out?

It's went by really fast. I didn't take any days off after football and got right on the mat because I was already behind on my conditioning, but yeah I'm still on cloud nine with the way our football season went.

What is it like to balance two sports and does it make you a better athlete?

It definitely makes me a better athlete. Football and wrestling go hand-in-hand. It's kind of a difficult transition because you go from lifting and trying to stay big for football then have to keep that strength throughout wrestling while maintaining your weight. But I love it!

How is the wrestling mentality different from a football mentality?

To be successful in wrestling, your mental toughness has to be unreal. You're constantly relying on yourself to get the job done instead of having ten other guys around you to help. Out on the mat, it's you or the other guy,

What are your goals this weekend besides another state title?

I want to help our other qualifier, Nate Thomas, get on the stand. Also, I want to just go out and compete and get better.

Advice to a youngster wanting to break into wrestling?

Work hard. Visualize yourself perfecting your moves and work on them constantly during practice. Most importantly, just have fun. The sport can be very rewarding, in many ways, but none of it will matter if you aren't having fun.

What do you do in the off-season to become a better athlete?

I love working out. I try to get on the mat as much as I can. In the past we lifted for football so I would imagine I will probably do the same this year but approach it a little differently.

I try to be a leader. Whether that's leading by example or using encouragement.

I'm going to wrestle next year. Wrestling has always been my first love.

When you are not playing sports, what do you do for fun?

I like hanging out with friends, going to the movies, stuff like that. I recently started playing guitar so I guess that's a hobby also.

How awesome was the experience of this football season for you and the community?

It was great. You can't beat a Fall Friday Night in Columbus. I've never seen the town so alive and together as much as it was during the season. It almost felt like we brought the community together.

What's it like to grow up in the community of Columbus?

It's definitely been an experience, haha. Going all over the country for wrestling has helped me realize how much more is out there but I will never forget the memories I've had growing up here.

I honestly don't think people know how hard I work. The amount of work and time I've put in is unreal. I am constantly thinking of what I can do to improve.