v Faces in KS: Dean Wade - Sports in Kansas 
Warning: include(../includes/bodytag.php): failed to open stream: No such file or directory in /home/kansass/public_html/ks/news/index.php on line 36

Dean Wade of St. John will go down as one of the best high school Kansans ever. (photo: USD 350) 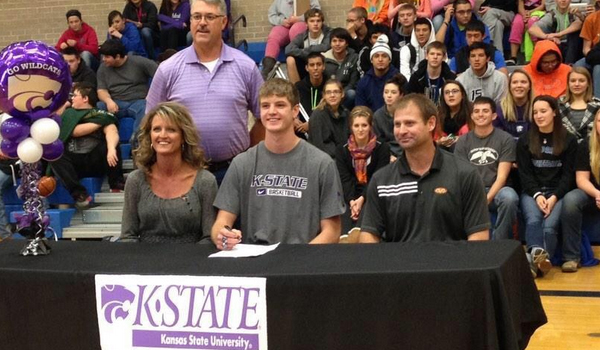 It's very rare to see major division one basketball recruits in Kansas. Sure we have seen Willie Cauley-Stein (Olathe NW), Perry Ellis (Wichita Heights), Conner Frankamp (Wichita North) and Semi Ojeleye (Ottawa) go on to sign with major programs as of recent. There are also guys not recruited out of high school like Ron Baker (Scott City) of Wichita State who go on to become major stars in college basketball. Or guys like Todd Okeson of Weskan, an unincorpated town in Kansas with around 200 people, who take the junior college route before starring at Nevada in the 2004 NCAA Tournament.

It's even more rare to see a division one player recruited out of small town Kansas. Sure, Cauley-Stein was originally from Spearville, population 806, but it took him transferring up to the KC area to generate the division one interest. Baker didn't even have a sniff outside of a few low majors and pay your first year option at Wichita State, which has turned into a Tom Brady sixth round pick to the Patriots type of deal for the Shockers.  So the point of the story here is you don't often see a division one player come directly out of a 2A high school in Kansas, especially one with a population of 1,295 and enrollment of 113. That is until you meet St. John senior and Kansas State signee Dean Wade, ranked the 109th player in the nation by Rivals for the class of 2015.

Wade is living out the dream of every small town athlete in Kansas that goes unnoticed. So how does a kid from small town Kansas generate around 15 major division one offers?

"I have worked really hard to become a collegiate player, " Wade said. "I am working on getting stronger and playing in the AAU circuit has definitely helped."

Wade, a 6-foot-9 220 pound forward, has developed into being a high school star in Kansas over the past three basketball seasons. As a sophomore in 2013, he helped St. John to 1A-I state title averaging 16 points per game and 7.7 rebounds. Last year was Wade's breakout season as he helped the Tigers to a 2A state title (26-0) by averaging 22 points and 8.1 rebounds per game, despite only playing 18.5 minutes per game.

"Dean has had a great season or us. He is playing limited minutes this year and is putting up those kind of numbers." St. John head coach Clint Kinnamon said.

Not only does Wade bring immediate offensive production (1,209 points in three seasons), he is a game changer on the defensive end with 206 career blocked shots and 492 rebounds.

"He changes so many shots and deflects so may other passes that he doesn't get credit for on stat sheets." Kinnamon said.

Coach Kinnamon said once Wade committed to Kansas State last summer the pressure was off and he has elevated his game this season.

"I think a lot of the pressure is gone because he made his decision for college last summer. He can focus totally on what's going on with our team. You're a kid and you're going to notice if Bill Self or Billy Donavan is in the stands, especially the gyms that we play in."

There is even mutual respect from other big time athletes that have played against Wade. Central Plain's is a 2A team that has beat three 6A teams this year and took second in the Tournament of Champions in Dodge City. Their star athlete Layne Bieberle, who helped the Oilers to a 8M-I football title this fall, has lost to St. John six times in basketball over the past two seasons. Four of those losses being their only losses last year holding them out of the 2A state tournament despite being one of the better teams in 2A. This year both teams are in different substates. When asking Bieberle who the best athlete he's seen in high school it was easy.

"Dean Wade of St. John without a question. He is an exceptional athlete that I expect to do very well at Kansas State." Bieberle said.

St. John, who is 43-0 over the last two seasons,  is the favorite to win it all in 2A this season even after they lost all-state players Kade Kinnamon and Zuriel Reyes off their undefeated team last season. The emergence of sophomore Cole Kinnamon, who is coach Kinnamon's son and Kade's younger brother, has been big for the Tigers in 2014-2015. The 5-foot-11 guard has averaged 14.2 points per game, 4.5 assists per game and 3.2 steals.

"Our guys forgot last year. They came in with a fresh attitude and were ready for this season."

This isn't the first time Coach Kinnamon has seen a star at a small high school. He was Jackie Stiles head coach at Claflin back in the 90's. Stiles, who is the all-time scoring leader in KS history and NCAA history, averaged 46.4 points per game as a senior for Kinnamon at Claflin.

"I have been blessed as a coach, there is no doubt. I have had the opportunity to coach two of the best to ever come through Kansas." Kinnamon said.

With or without a state title this season, Wade could go down as one of the best high school Kansans of all-time. With a potential three state titles as a starter, only two players will have more as starters in Jacy Holloway of Moundridge (1990-1993), who went on to star at Iowa State, and current Kansas star, Perry Ellis of Wichita Heights (2009-2012). The duo are the only two boys in Kansas history to start on four consecutive state title teams.

"We had been working together since second grade to bring home a title the last two years. Our expectations are high again this year and that's to win another state title." Wade said.

We caught up w/ Dean Wade below.

What are the teams goals this season?

Our expectations this year are high and that is to win state.

How does a kid from a small town become recruited major like you were?

I've worked really hard to get the opportunity to play at the collegiate level and I got involved with an AAU team which helped a lot. With our AAU team we traveled everywhere and I had amazing teammates which was a blessing,they helped me out a ton.

What is it like to bring two state titles back to St. John?

It was amazing to be able to bring two state championships back to SJ that team that won that title has been working together since 2nd grade so it was a goal for so long.

How has the season went so far?

The team this year are looking great! We are young but we have some good upperclassmen to lead the younger guys! I think this year will be a good year!

What have you tried to improve on?

I tried to get stronger and work on my quickness and ball handling!

What is it like to play for Coach Kinnamon?

It is great because he's such a great basketball coach he knows what some teams do before they do it it seems like! But he's a great coach and really good person! I wouldn't want to play for anyone else!

What is it like to grow up in a small town?

Best player I've faced would either be Stephen Zimmerman from Vegas or Malik Newman.

One thing the average person wouldn't know about Dean Wade?