v Horton's Trey Dishon commits to Kansas State - Sports in Kansas 
Warning: include(../includes/bodytag.php): failed to open stream: No such file or directory in /home/kansass/public_html/ks/news/index.php on line 36

Trey Dishon with Bill Snyder this past weekend. (submitted photo) 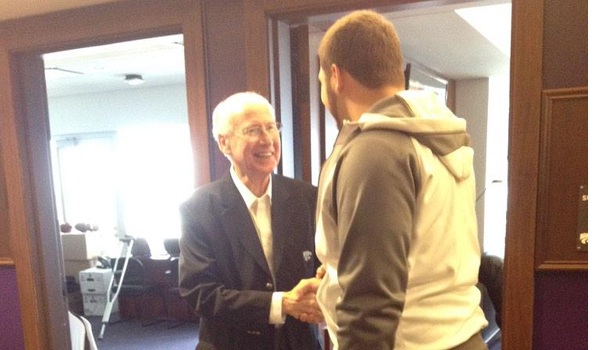 If you searched Trey Dishon of Horton's name last week on Google you wouldn't even find a Hudl highlight video of him and there was no sign that he was being recruited for football at the division one level.

You would find a video of Dishon dunking a basketball from a few years ago. Maybe a few lists that he was selected to the all-state team, this years Shrine Bowl, and that's about it.

That all changed real fast last Friday. Dishon, a senior who was committed to play football at  Division II power Northwest Missouri, was offered by Bill Snyder and the Kansas State Wildcats. After a visit this weekend Dishon made it official, via his twitter feed on Monday night, that he would play football for the Wildcats on a full ride scholarship.

So how does a kid fly under the radar for almost the entire recruiting season. Maybe it's because he is from a high school of 155 students in a town of 1,776 in northeastern Kansas. If anyone has been able to find college football talent out of Kansas in the last 25 years it is Snyder. It's definitely not out of the norm for division one's to pass over Kansas kids, just check the amount that end up division one after two years of playing in the Kansas Jayhawk Community College Conference.

Dishon, who stands 6-foot-3 and weighs 292 pounds, already has the size of a division one defensive lineman. His weight room numbers are also off the charts for a high school senior, benching 365 pounds and squatting 550. His athleticism shows on the basketball court, where he averaged 16 points per game and nine boards last season. His 40 time ranges in the 4.9s, very impressive for a guy in the 300 pound range.

He was all Wildcats when asked the question on why he chose Kansas State.

"I'm just a small town kid who wants to play division one football close to home, that's it." Dishon said.

With Dishon heading to Kansas State, it marks the second consecutive year a player from Brown County (population 9,984) will send a player to division one after Peyton Newell of Hiawatha signed with Nebraska in the class of 2014.

Check out Dishon's senior highlights below