v Salina Central’s Goll is National Coach of the Year - Sports in Kansas 
Warning: include(../includes/bodytag.php): failed to open stream: No such file or directory in /home/kansass/public_html/ks/news/index.php on line 36

Salina Central’s Goll is National Coach of the Year 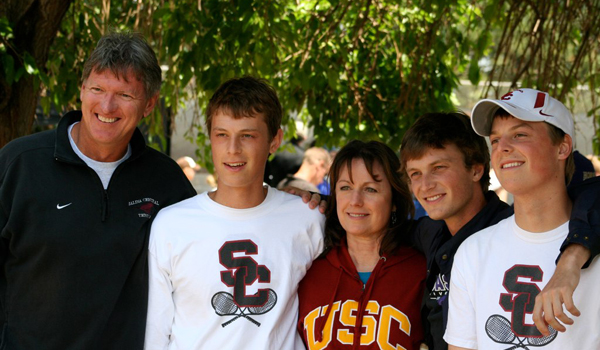 INDIANAPOLIS, Ind. — For the fifth year in a row The National Federation of State High School Associations (NFHS) Coaches Association has dubbed at least one Kansas coach among the best in the nation. Salina Central’s tennis coach Michael Goll is a 2014 National Coach of the Year award winner for his efforts during the 2013-14 school year.

Goll becomes the 29th Kansas coach selected as a national coach of the year for a boys tennis season that brought a 5A Boys State Tennis Championship defending the Mustangs title from 2013. Goll’s two team state championships come along with 25 years of leadership at Salina Central on the tennis court for the boys and girls squads. Goll also guided three different 5A state doubles teams to state titles in 2012, 2013 and 2014. In 2006 and again in 2009, coach Goll was dubbed 5A Girls Coach of the Year in Kansas. Then in 2012 and 2014 he was named coach of the year on the boys side.

In addition to coaching tennis at Salina Central, Goll is involved in the YMCA programs in the Salina area and is a member of the Kansas Coaches Association.

The NFHS, which has been recognizing coaches through an awards program since 1982, honors coaches in the top 10 girls sports and top 10 boys sports (by participation numbers), and in one “other” sport that is not included in the top 10 listings. Winners of NFHS awards must be active coaches during the year for which they receive their award.

The KSHSAA works with the Kansas Coaches Association (KCA) to nominate Kansas coaches. The KCA contacts their potential state award recipients to complete a “coach profile” form that requests information regarding the coach’s record, membership in and affiliation with coaching and other professional organizations, involvement with other school and community activities and programs, and coaching philosophy. To be approved as an NFCA award recipient and considered for sectional and national coach of the year, this profile form must be completed by the coach or designee and then approved by the executive director (or designee) of the state athletic/activities association.

Goll receives this national accolade after first being awarded state and sectional awards. Other sectional and state coaches of the year from Kansas will be announced at a later date. The NFHS is divided into eight geographical sections with Kansas part of Section 5 - Midwest (KS, MN, MO, NE, ND, SD).

The NFHS Coaches Association has an advisory committee, composed of a chair and eight sectional representatives.  The sectional committee representatives evaluate the state award recipients and select the best candidates for the sectional award in each sport category. The NFHS Coaches Association Advisory Committee then considers the sectional candidates in each sport, ranks them according to a point system, and determines a national winner for each of the 20 sport categories, the spirit category and one “other” category.

A total of 533 coaches will be recognized this year with state, sectional and national awards.