v Faces in KS: Layne Bieberle - Sports in Kansas 
Warning: include(../includes/bodytag.php): failed to open stream: No such file or directory in /home/kansass/public_html/ks/news/index.php on line 36 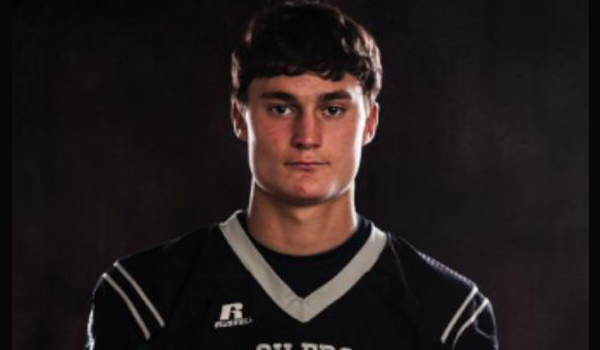 Many athletes play multiple sports in the state of Kansas. However, there aren't many who play them at the level of Central Plains senior star athlete, Layne Bieberle.

"Playing mulitple sports lets me play more than one sport. I have the life of a multi-sport athlete, whatever is in season is what I play." Bieberle said.

Bieberle, who stands 6-foot-2 and weighs 170 pounds, helped the Central Plains football team to it's first ever state football title as a school this fall with a 42-30 victory over Hanover. Central Plains is a consolidation of Claflin & Quivira Heights. If you've followed high school football in the past 25 years, then you would know all about the storied history Claflin has in football. Bieberle caught 53 passes for 1,199 yards and 27 touchdowns in 2014, his second consecutive year over 1,000 yards recieving. His 57 career touchdown receptions will go down as an 8-man state record once verified by the Kansas Sports Hall of Fame.

"Winning the state championship was an unbelievable, amazing feeling that will be an awesome memory." Bieberle said.

It's now basketball season and Bieberle excels on the court earning all-state honors in 2A last season. The Oilers are currently 6-1 on the season with their only loss coming to the number one ranked team in 2A, St. John (59-57). Last year Central Plains lost four times, with all four losses coming to the back-to-back state champion Tigers. This season, St. John and Central Plains will be in different sub-states.

"Our goal this season is to at least beat St. John once. Dean Wade of St. John is the best basketball player I've ever played against. It will be exciting to see him at Kansas State next year." Bieberle said.

Not many all-state football players are tennis players, until you meet Bieberle. Bieberle and his doubles partner, Michael Ryan, took fourth in the state of Kansas in 3-2-1A at state tennis last May in Goddard.

"I got into tennis because of my brother who went and played tennis in college and I've been playing that since I was about five years old because of him." Bieberle said.

Everyone knows Claflin as Jackie Stiles town, as it should be, but right now its Bieberle's time to shine. Watch for Bieberle and the Oilers to make a deep run in 2A basketball this season.

I got involved with sports because of my dad and my brothers!

How was it to win the state title this year in football?

Winning the state championship was and an unbelievable amazing feeling that will by an awesome memory!

What’s your goal this year in basketball?

Our goal this season in basketball is to get a win on the exceptional St.john tiger team!

Our basketball team is looking good! Bringing back most of our starters!

How would you describe yourself as an athlete?

Describing myself as an athlete is that I work hard in every sport that I play! I don't take losing very well!

How does playing multiple sports help you out?

Playing multiple sports says that I can play more than just one sport! Life of an all around athlete!

I'm the type of teammate that just wants to win! Whatever it takes!

What do you plan on playing at the next level?

I plan on playing football at the next level! Right now I'm just taking the time to look at the options that I have and then I will make my decision on where I want to play!

I play tennis as well and I got into that sport because of my brother who went and played tennis in college and I've been playing that since I was about 5 years old because of him!

What is it like to grow up in Claflin?

Growing up in Claflin has been awesome because I love the small town life and everybody is so close and it feels like one huge family living in a small town!

Playing with a QB like Crites has been fun! The kid can put the ball where it needs to be! And the kid can get out of the pocket and run as well so I'd say he's a well rounded QB!

My Favorite subject in school has probably been my Wood-shop class! I enjoy starting a project and to be able to see the process and steps it takes to be able to get it done!

Best athlete you have ever faced in high school?

The best athlete that I have faced would definitely be Dean Wade from St. John! There is no question that the kid is just an exceptional athlete and It will be exciting to see him go far at Kansas State next year!

Something the average person doesn’t know about you?

One thing the average person probably doesn't know about me is that I can get pretty emotional at times on the inside and I take a lot of things to heart!