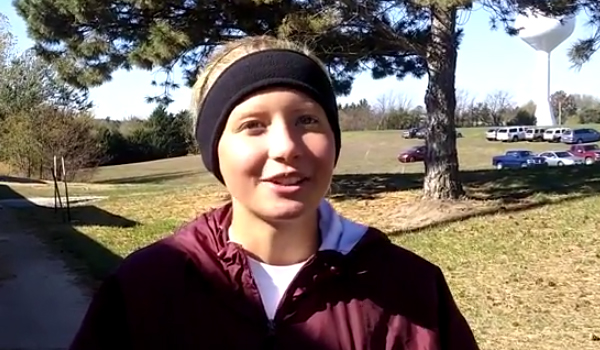 The 5-foot-6 sophomore distance runner won a second consecutive Class 4A individual state championship with a time of 14:29.90 this past season. Logue also took seventh at the Nike Cross Nationals Heartland Regional championships in 17:48.60. Her winning time of 14:13.70 at the Pleasanton Invitational and seventh-place time at the NXN Heartland Regional, respectively, ranked as the fastest 4K and 5K performances among Kansas prep competitors this past season.

Logue has maintained a 4.0 GPA in the classroom and ranks No. 1 in her class. A pianist and flutist in her school’s band, she has donated her time to Girard High’s recycling, foreign language and service clubs as well as the school’s peer-leadership and tutoring initiatives. Also a member of the Future Educators Association, 4-H Youth Development Organization and the Fellowship of Christian Athletes, Logue has volunteered locally on behalf of her church’s youth group and the Wesley House outreach mission to address the needs of low-income families.

“This season, she would start out at a steady speed and just increase the gap she had on the other runners,” said Amanda Callaway, head coach of rival Southeast High. “That can be hard to accomplish. She ran with confidence. Even in the big races she never doubted her capability and gave it her all, meaning even if she didn't know the runners she didn’t seem to let that intimidate her.”

Logue will begin her junior year of high school this fall.

The Gatorade Player of the Year program annually recognizes one winner in the District of Columbia and each of the 50 states that sanction high school football, girls volleyball, boys and girls cross country, boys and girls basketball, boys and girls soccer, baseball,softball, and boys and girls track & field, and awards one National Player of the Year in each sport. The selection process is administered by the Gatorade high school sports leadership team in partnership with USA TODAY High School Sports, which work with top sport-specific experts and a media advisory board of accomplished, veteran prep sports journalists to determine the statewinners in each sport.