v Eudora's Mitchell Ballock among nations best sophomores - Sports in Kansas 
Warning: include(../includes/bodytag.php): failed to open stream: No such file or directory in /home/kansass/public_html/ks/news/index.php on line 36 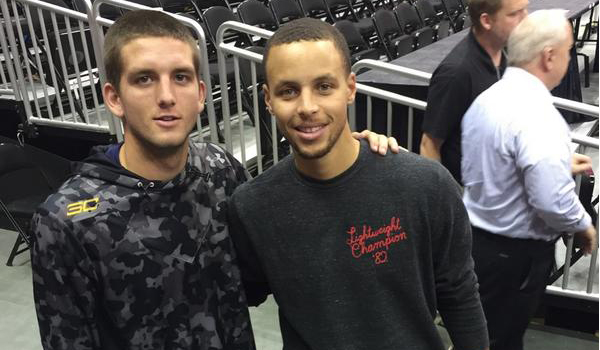 Eudora's Mitchell Ballock is primed for a big sophomore season after helping lead the Cardinals to the first ever 4A-II state championship in 2014. There are no days off for Ballock, who continues to rise he charts as one of the elite young high school basketball players in the United States. Ballock is currently rated as the #24 overall player in the Class of 2017 by Rivals.com

"The offseason has went great. It has gave me a lot of time to work on my game," Ballock said. "I have worked on finishing around the rim and different moves to get me into scoring position to elevate my game to the next level".

Ballock, a 6-foot-5 wing, was a first team all-state selection at Sports in Kansas last season after averaging 21 points as a freshman. Ballock teamed with his then senior all-state brother, Andrew, who is now a freshman guard at Missouri Southern in Joplin, to bring Eudora a 4A-II state title last season.

"I will definitely miss playing with Andrew this year. He was a great leader that set the tone for me and our team. It will be different at first, but I think we can adjust." Ballock said.

Ballock emerged onto the national recruiting scene before he even played a high school game. After his eighth grade year, he was offered by Creighton in the summer of 2013. Videos of Ballock dunking in junior high have surfaced all over the internet over the last few years. He now holds official offers from Creighton, Iowa State, Kansas and Kansas State entering his sophomore basketball season.

"The recruiting process has went well for me. I am enjoying it and trying not to rushing into anything," Ballock said. "I have four offers right now and am trying to find the best fit for myself."

Ballock enjoyed a great offseason in 2014 as he again played with the very elite KC Run GMC AAU squad, who are one of the top teams in the nation. He attended the SC30 slect camp in San Francisco this summer which is a guard camp hosted by NBA all-star Stephen Curry. Only around 20 of the best guards in the country were invited to the event. Ballock also shot in the three point contest in New York at the Under Armour Elite 24, taking runner-up.

"The summer went good this year. I felt like I met the expectations that people wanted. The SC30 select camp was an unbelievable opportunity for me," Ballock said. "The Summer circuit was full of talent."

Now Ballock focuces his attention on the high school basketball season. The expectations haven't changed in Eudora, who will now make the move up to 4A-I this season. The Cardinals may be without Ballock to start the season for the first few games as he has a stress fracture and is in a boot.

"We want to make it to the state championship and win it again," Ballock said.

Eudora, led by head coach Kyle Deterding, opens the season this Friday at home against Spring Hill.   The Cardinals are ranked #1 in the 4A-I preseason poll that came out Monday from the Kansas Basketball Coaches Association (KBCA).