v Looking at who's left: 3A - Sports in Kansas 
Warning: include(../includes/bodytag.php): failed to open stream: No such file or directory in /home/kansass/public_html/ks/news/index.php on line 36

Looking at who's left: 3A 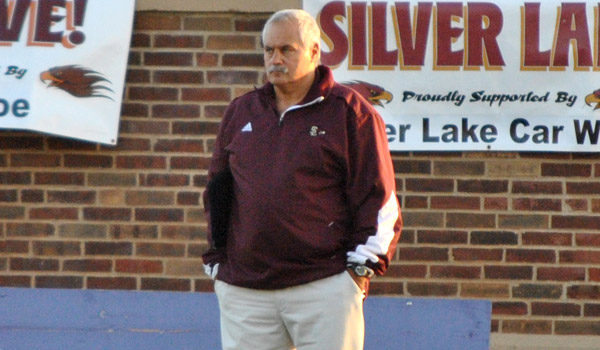 Silver Lake has been one of, if not the best team during the playoff era. The Eagles have played in every 3A state title game since 2002, with the exception of one season (2009). They are 89-23 all-time in playoff games with eight state titles, all under legendary head coach C.J. Hamilton. The Eagles did slip up against a very good Rossville team in the War on 24 a few weeks back, but they also lost in this game last year on their way to winning a state title. Ryan Matzke leads Silver Lake with 1,860 yards passing (22 TD) and 635 yards rushing (12 TD). Jace Freeman, one of the states top two-way players, leads Lake with 7 interceptions on defense and 687 yards receiving on offense after earning all-state honors a year ago. Tate Schenkel leads the Eagle defense with 86 stops on the year from his linebacker position. Wellsville doesn't allow a lot of points, just 16 total over the last seven weeks, but they haven't faced an offense like Silver Lake's. Outside of Rossville and Holton, this should be the best defense that Lake has faced in 2014.

The Wellsville Eagles are in the round of eight for the first time in four years. They have gotten it done with defense on the year, only allowing 16 combined points over the last seven weeks. They will need all the defense they can get to limited one of the states best teams in Silver Lake, who averaged over 50 points per game. Wellsville is led by Brett Osbern who has rushed for 1,397 yards and 21 touchdowns on the year. Quarterback Cole Silsby has combined for 1,501 yards offense on the ground and through the air for 22 touchdowns. Wellsville is a run first team but has thrown the football around an average of 10 times per game on the season. This will be a battle of two defenses and both teams will have a hard time stopping each others offenses. Wellsville is 36-17 all-time in the Kansas playoffs and are still looking for that first ever state title in the playoff era for football.

The Bulldogs seem like one of the most complete 3A teams in Kansas in 2014 and their convincing week nine win over Silver Lake helps validate that. Quarterback Tucker Horak is one of the top juniors in all of Kansas, passing for 1,409 (20 TD) and rushing for 1,587 (20 TD). Senior Thatcher Horak is the Bulldogs second leading rusher at 822 yards (13 TD) and has also had over 400 yards receiving (7 TD). Nick Reesor has 72 tackles on the defense with three interceptions. The Bulldogs will face a Colgan team that has been challenged on the year with a very tough schedule in the CNC league, their two losses are to two active 4A-II ranked playoff teams. Rossville will be the favorite in this one but it should be a much better game than most people expect. The Bulldogs are 44-24 all-time in the state playoffs and are still looking for that first ever state title. Will we see another rematch of the War on 24 in sub-state?

Colgan is one of the most well coached teams in Kansas, led by legendary head coach Chuck Smith. The Panthers are 77-22 all-time in the Kansas playoffs with six state titles in the playoff era. This is the Panthers 27th appearance in the round of eight. The Panthers are a run first team totaling over 2,200 yards rushing after 10 games. Austin Commons (720 yards) and Andrew Stewart (753 yards) lead the Panthers rushing attack. Colgan has the ability to pass the ball with junior quarterback Ryan Cedeno (887 passing) and his favorite target has been Ian Duncan (353 yards/2TD) on the year. Duncan, one of the states top high jumpers, had six receptions for 119 yards against Galena last week. This should be the best team that the Panthers have faced in 2014. The good news is it's at Pittsburg (Pittsburg State) and the Panthers are used to the turf. Ball control and turnovers will play a major factor in the outcome of this game.

Halstead is 11-13 all-time in the state playoffs. They haven't been this deep in the playoffs since 1996. Halstead is a run first team. They are led by junior Blake Beckett, who has rushed for over 1,800 yards in 2014. Eli McKee has added over 1,100 more to help round out the Dragon backfield. The Dragons are on a four game winning streak since losing to Kingman in the opening round of districts. Statewide, nobody probably expected the Dragons to be here, but they are proving they belong with back-to-back quality playoff wins over Southeast of Saline and Chaparral.

Much like Halstead, many didn't expect a Minneapolis squad to be this deep into the playoffs in 2014. They have proved all the doubters wrong by making a nice playoff run in 2014. The Lions are very close to being undefeated on the year, just nine total points in three games they lost by. Minneaoplis has gotten back-to-back playoff wins over Beloit and Hoisington to put them in this round of eight matchup with Halstead. The Lions beat last years 3A runner-up Beloit twice on the season. Eric Yoxall leads the passing attack for Minneapolis with over 1,900 yards on the year. Head coach, Jhon Haehn, is in his first season as the head coach after taking over for Jeff Giles, who passed away last February. What a memorable season for the Lions who are in the round of eight for the first time since 2007. With a win it would make school history as its only football semi-final appearance.

The Spartans feature one of the states top players in senior running back Jaques Williams. Williams, a speedster who won the 3A state 100 meter dash last spring, has over 1,400 yards rushing and 31 scores on the year. Collegiate has won eight in a row since their week three loss to 4A-II power Andale (34-28). The Scott City defense will be one of the best defenses if not the best that Collegiate will face in 2014, allowing just a touchdown per game. Collegiate will need to tighten down their defense in this one, even though they have won in some shoot outs this season. The Spartans are 27-15 all-time in the state playoffs with three state titles, with the last one coming in 2009. This game has a state title feel to it. This season marks 20 years ago since DeAngelo Evans, then a junior, and Collegiate won the 3A state title against Marion in Hays (28-6). Mike Geher, now the head coach at Collegiate, was also the head coach of the 1994 and 2000 titles from Collegiate in his first stint as their HC.

Scott has been the talk of the west in 3A all season long. Other than a close win over Ulysses (14-7), they have dominated competition. Trey O'Neil, son of head coach Glenn O'Neil, is one of the states top multi-sport athletes. O'Neil has thrown for 1,534 yards (19 TD), while intercepting seven passes from his defensive back position. Juniors Wyatt Kropp and Cooper Griffith have combined for over 1,900 yards and 31 touchdowns to form one of the best backfields in 3A. Griffith also leads the Beaver defense with 124 tackles. Receivers Sloan Baker (422 yards) and Brett Meyer (494 yards) are threats in the passing game for Scott. Baker, the younger brother of Shocker star Ron Baker, also has 81 tackles on the defense. Scott may be the most complete team in 3A and will need their best defensive performance of the year to limit a Collegiate offense that is one of the states best. They are capable of producing turnovers, intercepting 20 passes as a team in 2014. Scott is 44-15 all-time in the state playoffs with four state titles, their last one coming in 2012.