v Burns rushes to 8-man state record - Sports in Kansas 
Warning: include(../includes/bodytag.php): failed to open stream: No such file or directory in /home/kansass/public_html/ks/news/index.php on line 36 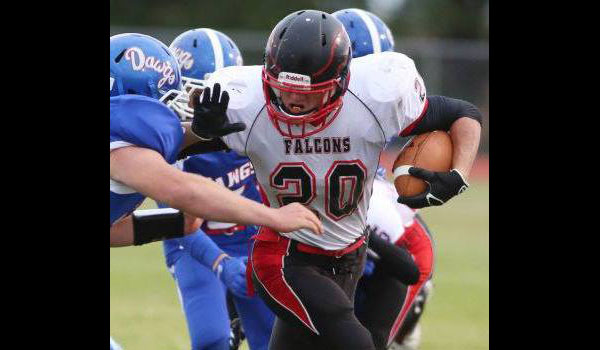 Senior running back, Cannon Burns of Fairfield (6-0 180) rushed for 565 yards and 11 touchdowns on Thursday night in a 91-44 victory over Bucklin in week nine of the football season. The single game 11 touchdowns tied a state record, once verified by the Kansas Sports Hall of Fame, for touchdowns in a single game. Tying Chase's Jake Kizzar's 11 in 2009.

Burns also beat a 40-year old single season rushing mark, set by Bryan Kendall of Haviland (2,841 yards) in 1974. Once verified by KSHOF, Burns mark of 2,914 rushing yards in 2014 will also become a state record.  The most impressive thing is that he did this in only nine games on the season. Fairfield finished at 5-4 and will miss the playoffs. Just think if Burns had four more games to had to his total of nearly 3,000 yards.

Burns averaged 323.4 rushing yards per contest and 10.6 yards per carry for the Falcons in 2014. He also scored 43 rushing touchdowns and 47 total touchdowns on the season, falling four short of the state record (51) by Damon Schurr of Osborne in 2011.