v 6A Boys State Basketball Tournament Preview - Sports in Kansas 
Warning: include(../includes/bodytag.php): failed to open stream: No such file or directory in /home/kansass/public_html/ks/news/index.php on line 36

Iowa state signee Clayton Custer of BV Northwest is among the nations best for 2014 (Photo:T.Custer) 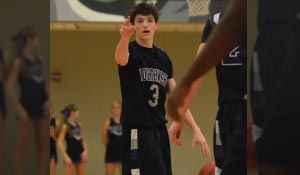 (all games on Thursday in Wichita)

Led by head coach Ed Fritz, Northwest is the defending 6A state champion and one of the top teams in the United States. The Huskies have showed that they are capable of being beat, losing to rival Blue Valley North once in league play this season. They also lost to Apple Valley (MN) this season, a team that was ranked in the top five nationally at the time. Clay Custer is a two-time all state selection that is headed to Iowa State next season, he is one of the top guards in the country for the class of 2014. A lot of balance on this team with four other players, who all returned as starters from last year, that average at least seven points a game. Nortwhest entered the season with at least three players having division one offers (Custer, Vince Fritz, Ben Richardson).

North will be battle tested playing a quality schedule in the city league of Wichita. They feature three players who average in double figures, led by Zach Beard (16.1 ppg). North is capable of knocking off teams and they showed that with a quality victory over 4A-I power McPherson.

The Eagles have been to state two times in their school history and are back for the first time in four years. Two players average in double figures on the season. Maize punched its ticket to Koch Arena last week with a 49-42 victory over fellow AVCTL-I member Hutchinson. The Eagles three losses this season came to Wichita Southeast, Wichita East and Derby. All losses were seven points or under.

Olathe East was ranked as the top team by the KBCA in mid-season and has played solid basketball throughout the year. Any team that plays in the Sunflower League will have been tested in 2013-2014. They are led by division I signee, Ezra Talbert (15 ppg), who is headed to Liberty next season. Caelan Neal also averaged 15 points a game for the Hawks. East punched its ticket to Wichita with an impressive 83-74 victory over Lawrence in sub-state. One of the Hawks losses this season came to an opponent from the state of Missouri (Barstow).

When you think of Wichita East you think of its balance. With four players averaging in double figures, you never know who is going to have the big night. Wichita East doesn’t have any bad losses on the season. They lost one of the top teams in 5A, Hays, and to fellow league member, Wichita Southeast. The Blue Aces got to the state tournament with wins over Washburn Rural (75-37) and Topeka High (66-50) in their sub-state. This will be the third meeting with Wichita Southeast on the season as they split during the regular season.

Three players for Wichita Southeast average in double figures on the season. The Golden Buffaloes have been tested on the year and have even played the top team in Kansas, Blue Valley Northwest, losing by 19 in the Valley Center Tournament. Since that loss they have won nine of their last 10.

Northwest has surprised a lot of people this season and has played a quality schedule out of the Sunflower League. Washburn signee, Brady Skeens, is averaging nearly 20 points a game for the Cougars and will contend for all-6A honors this season. SM Northwest doesn’t have any bad losses on the season, losing twice before break (BV North, SM South) and once after (Olathe East). They will get a chance to make up that loss as they play Blue Valley North on Thursday.

Blue Valley North is known as the only team in Kansas to beat Blue Valley Northwest over the last two seasons. They have won 11 of their last 12 basketball games this season and punched their ticket to state with a victory over Shawnee Mission West (57-43) in sub-state. They play SM Northwest on Thursday and beat them before the holiday break by two (55-53). This should be a very even match-up of two KC area schools squaring off, EKL vs. Sunflower.