v 5A Boys State Basketball Tournament Preview - Sports in Kansas 
Warning: include(../includes/bodytag.php): failed to open stream: No such file or directory in /home/kansass/public_html/ks/news/index.php on line 36 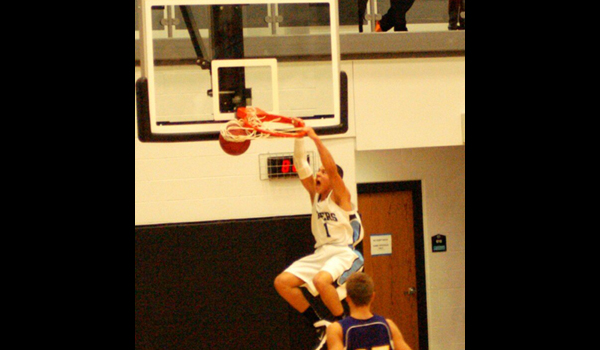 What makes Lansing so dangerous is that they could be the most balanced team in Kansas. The Lions feature five players who average at least eight points per game. They are led by Khalil Bailey (13.0 ppg), Zach Jackson (14.9 ppg) and Joe Schneider (16.0 ppg). Coach Rod Briggs and his team are very hungry for a state title after taking second last season.

They may have a .500 record on the season, but keep in mind they play in the very competitive Eastern Kansas League out of the Kansas City area. The Saints earned their berth to state with an overtime victory (65-59) over St. James Academy in sub-state.

Goddard Eisenhower is going for its first ever win at the state tournament in basketball. They are led by all-state junior, Trevon Evans, who averages 21.4 points per game. The Tigers only loss this season came to the hands of Andover.

Who would have ever thought Wichita Heights would be down to 5A. The team that dominated class 6A for the last several years will now be a contender at the 5A level. This team will be battle tested because of their schedule. Ealy Bell (10.2 ppg) and Semaj Harvey (11.2 ppg) lead the Falcons in scoring on the year. All of Heights losses this season have came to 6A opponents.

Hays has been perfect on the year and earned its 5A berth with a dominating win over Bishop Carroll in the top seeded bracket sub-state at Goddard-Eisenhower. The Indians feature Brady Werth (6-7 Senior), who is one of the best players in class 5A. It’s hard to predict how good Hays will be because of their schedule, but it seems that they are just as good as anyone in this classification. They got a big win over 6A Wichita East on January 25th in the Dodge City Tournament of Champions that proves they are for real. Their first round game will be a rematch with Salina Central, as Hays won last time by one point.

Throw records out here, Central has lost in some close games on the year. One of those is their opponent this Wednesday, Hays, who they lost to by one on February 11th. The Mustangs clinched their 5A tournament trip with a 62-60 overtime victory over Andover last week. They are a very dangerous nine loss team.

The Scots are back up to 5A this season after taking second to Ottawa and Semi Ojeleye in class 4A last year. Highland Park’s only loss this season came to the hands of 6A Lawrence. Shafee Carr and Jahmal McMurry are two of the best players in class 5A. They should be a serious contender for the 5A title.

Washington is led by 6-foot-2 senior, Jeremee Bennett, who is averaging 21.8 points per game. Bennett has went over thirty points five times on the season. KC Washington will have their hands full with Highland Park, which will be the best team they’ve faced all season.

Take a look at our predictions