v 3A Boys State Basketball Tournament Preview - Sports in Kansas 
Warning: include(../includes/bodytag.php): failed to open stream: No such file or directory in /home/kansass/public_html/ks/news/index.php on line 36

Heath Tucker of Holcomb looks to lead the Longhorns to 3A tourney (photo: Dawn Tucker) 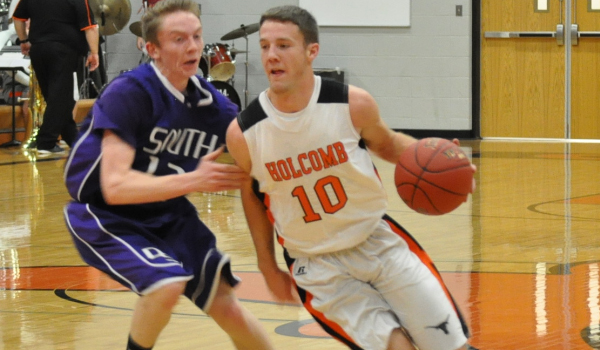 Hesston enters state with a perfect record on the year. Junior Grant Raleigh leads the team in scoring with 14 points per game, while three other Swathers average in double figures. Their mascot is hard to beat and so will this team. They absolutely cannot overlook Wichita Collegiate in this first round as this could be one of the best teams they have played all season.

Throw records out here as Collegiate is on a hot streak. Keep in mind that all of the Spartans’ losses came to opponents larger than 5A. Landon Root, an all-state QB headed to Northern Illinois, is the leader of this basketball team. Don’t be surprised if they can pull off an upset for being called the so called ‘underdog’.

Riverton, who plays in the CNC league out of southeast Kansas, is one of the better teams in that entire area. They were overlooked all season in the KBCA rankings and are undefeated against Kansas competition 3A and below. They have a nice win over 4A-I qualifier Winfield and one of their losses came to the hands of Oklahoma power & state champion, Douglass HS, in tourney play. Cousins Landon and Grant North lead the Rams charge.

The Mustangs punched their ticket to Hutch with an eight point victory over Silver Lake in the sub-state final. Rock Creek features three players who average in double figures on the season, so look for any player to step up. The Mustangs are led by senior all-state candidate, Ryan Schneider, who averages over 18 points per game.

The Trojans punched their ticket to state with a nine point victory over Thomas More Prep this past weekend. They survived a scare against Lyons in the sub-state semifinal, but would win in overtime by one. Payton Vetter leads this squad and is one of the better athletes in Kansas. Vetter has scored over 1,300 points in his career and is averaging over 19 this season.

Wellsville entered their sub-state as the number three seed and came out the champion. This sub-state featured defending 3A runner-up Humboldt and previously undefeated Council Grove, who would lose to Osage City. The Eagles would beat Osage City by three in the sub-state title game. Wellsville has yet to lose to a 3A opponent this season. This two vs. seven match-up could go either way.

Nemaha Valley has won six straight and is coming off a big upset victory over previously undefeated Sabetha in the sub-state final. Justice McKernan and Caleb Meyer both average in double figures for the Raiders this season. This will be the last state tournament trip as “Nemaha Valley” as they will be renamed “Nemaha Central” with the consolidation of Baileyville B&B.

Many people seem to overlook Holcomb until they start looking at their losses. They have lost to Pueblo East (CO), Scott City (4A-I), and the number one team in 3A Hesston. Those are three very good teams. Heath Tucker (15.7) and Trey Sleep (17.3) combine for 33 points a contest for the Longhorns. Tucker is one of the best multi-sport athletes in Kansas.

Check out our predictions