v Boys State Basketball Predictions - Sports in Kansas 
Warning: include(../includes/bodytag.php): failed to open stream: No such file or directory in /home/kansass/public_html/ks/news/index.php on line 36

Head coach Clint Kinnamon and St. John are looking to repeat, this time in 2A (photo: Joey Bahr) 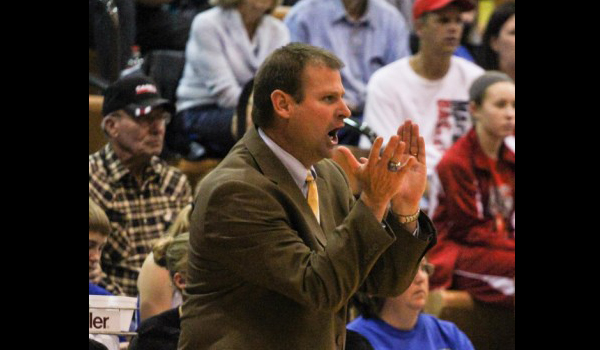 Defending 6A champion Blue Valley Northwest has been the team everyone has been talking about all season. They have only slipped up one time against Kansas competition this season (BV North). If they just play their game, they cruise through the 6A bracket.

This classification is loaded this year and matchups will obviously have a lot to do with the outcome of specific games. Topeka Highland Park has nearly been perfect this year, only loss came by one point to 6A Lawrence. The Scots' have been dominating competition over the last month. Hays is a team very capable of getting to the championship game as well and aren't to be counted out. Lansing is a very balanced basketball team and will have a tough bracket by playing the winner of Eisenhower/Heights if they win their opening round game.

Higland Park over Eisenhower (Taylor Eldridge, Keeper of the Hoops)

It should be interesting in the first year ever of this brand new division. McPherson is playing solid basketball and has as much championship tradition in its school as anyone. The Bullpups should get it done this year, becoming the first ever 4A-I champ. Independence is playing as good as basketball as anyone in Kansas at the moment, they haven't loss since early January. They beat a very good Coffeyville team three out of four times this season, including the sub-state final.

McPherson over Basehor-Linwood (Taylor Eldridge, Keeper of the Hoops)

Another brand new division and even though, top to bottom, it may not be the greatest by record, this state tournament will still be very solid. On paper, it looks to be a five team race (Andale, Eudora, Holton, Scott City and Concordia). Wouldn't be surprised to see any of those as a state champion.

Scott City over Andale (Taylor Eldridge, Keeper of the Hoops)

This is a loaded classification and a wide open race. Hesston, who is the favorite on paper, will have its hands full in the first round against Wichita Collegiate. Collegiate plays much larger competition than some of the usual 3A qualifiers. Riverton is a dangerous team as well to look for in this classification.

Hesston over Holcomb (Taylor Eldridge, Keeper of the Hoops)

St. John is the team to beat in this classification. The Tigers won 1A-I last season and feature all-state junior, Dean Wade (6-7 Forward), who is seeing division one looks. Colgan is a team to look for in this class, with only one loss in Kansas, most of their losses came to out of state opponents with bigger enrollments.

MDCV features a lot of balance with three players in double figure scoring as the Trojans are beating the average opponent by 26 points per game. Mark Price (6-9) and Matt Jones (6-6) are two of the tallest players in the entire classification for MDCV and will be hard for anyone to matchup with. The Trojans seem to be the heavy favorite at this point on paper.

MDCV over Valley Heights (Taylor Eldridge, Keeper of the Hoops)

Beloit St. Johns Tipton made a very nice run in football and are doing so with the same athletes in basketball. The Blu-jays are playing great basketball right now and are led by three players in double figure scoring in Trey Dubbert, Connor Eilert and Luke Eilert. Look for them to be a serious contender at the 1A-II state tourney.