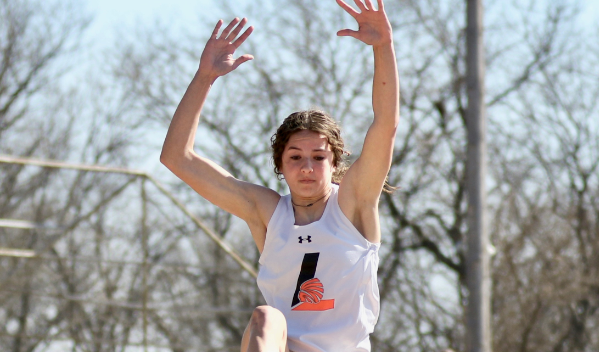 Tad Remy serves as Larned High School’s head football and track coach, along with weights instructor. In the Spring 2020 semester, Remy started to see a change with his top girl athletes during third block weights class.

Remy believed the Larned girls could have posted a strong 2020 track season. However, all spring sports were cancelled from the COVID-19 pandemic.

“Our girls had a really good shot of being pretty darn good,” he said.

On March 27, Hagerman and Smith were two of Larned’s five athletes who helped the Indians to a third-place showing at the Class 3A state powerlifting meet held at Halstead. Hagerman captured state in the 114-pound weight class with a 110-pound bench, a 195 squat and 135 clean.

Five days later, Hagerman competed in her first high school track meet – and delivered one of Kansas’ seminal performances in the return of spring sports. Hagerman leaped 37 feet, 11 inches to win the triple jump at the La Crosse Invitational. It marked a new school record and currently stands as the state’s top jump for all classes, per Kansas historian Carol Swenson. The former Larned mark was 36-9 set in 2015.

“It was pretty exciting to be able to jump that far,” she said.

She was infrequently measured in preseason, though had delivered in the 35-36 foot range, more than five feet ahead of her top junior high mark. Hagerman, with several Larned coaches in attendance, exploded for 36-10 on her first leap.

“It definitely caused a stir at the track,” Remy said.

Hagerman could “definitely” hear the gasps. The coaches said it came from “everyone.” She then went 37-1 on her second attempt. Currently, Newton’s Hayley Loewen ranks as the state’s second-best jumper with a mark of 37 feet.

“It was definitely a cool feeling,” Hagerman said.

“This is crazy, like man, we are really watching something here,” Remy added.

“She wanted to do it, so I generally try to allow kids to take a little bit of ownership of what they have going on, and she made it work,” Remy said.

Since then, Hagerman has re-calibrated her goals. She has looked up the all-time Kansas records and saw the state mark for all classes is 42-11.75, a mark set in 1995 by Liberal’s Dahlia Ingram. Tenth-best stands at 39-9.25. In the last 25 years, the best Kansas girl mark in 40-3.5 from 2011, per Milesplit. Hagerman would like to break the all-classes mark her senior year “or before that.”

“I didn’t know like how far I would be able to jump, so it kind of set a standard for goals that I have clear up to my senior year,” she said.

“This year, we were really excited, because you have a lot of pent-up angst and everything from last year,” Remy said.

Freshmen Abby Holt and Cortney Craft went third and fourth in the 100 hurdles, and Holt took fourth in the 300 hurdles. Freshman Cadee Upson and junior Ava Mull, a state runner-up in wrestling, combined with four top-fives in the throws. Overall, Larned finished third in the 11-team meet with 73 points. Larned has just two senior girls, Halle Barker and Sarah McMahon. Freshman Jaidyn Pinkston finished fifth in the triple at 31-1.5.

For the boys, junior Fernando Herrera paced with a third-place finish in 200 at 24.66 seconds and earned fourth in the 100 at 12.4. Remy, on staff at Larned since ’14 and in his fourth season as head track coach, believes Herrera can run much faster. The Indian boys likely would have captured the 400 relay, but dropped the baton.

Larned publicly documents its workouts, especially 40-yard dash and 10-yard fly times through an excellent website maintained by assistant coach Timothy Coles. In practice, Hagerman has posted 4.75 seconds in the 40, Smith 4.91 and Lemuz 4.94.

“Record them and publish them for the public to see, and kind of just allowing our athletes to see what they are improving on as they are getting better each day,” Coles said.

Remy labeled Herrera “by far our fastest kid.” He has run the 10-yard fly in just under 23 miles per hour, which broke Perez’s school record.

“There’s some talent there right now in our freshman and sophomore class,” Remy said. “I would say that it’s probably more talent than we have had in a few years. … We are sitting in a pretty good spot right now particularly in the weight room and on the track. I mean, we just have some pretty naturally talented track kids, and then obviously if they work hard, then that’s where you get some special results. It’s just one of those things where we have got a good culture with our track program.”

Hagerman grew up in Yucca Valley, Calif., and came to Larned every summer to visit family. Her grandfather, Jerel Hagerman, a Rozel-Pawnee Heights graduate, is the longtime Senior Pastor at Joshua Springs Calvary Chapel and started the church in 1978.

She is the middle of three siblings. In sixth grade, the Hagermans moved to Larned. Jayme’s mother, Lucia, is a veteran Larned teacher and coach. Jayme's father, Israel, is the JAG instructor. He was a highly successful eight-man football coach at Joshua Springs and has served on Larned football’s staff in the past. Jayme’s older brother, Joey, was a standout quarterback.

In 2019, Larned had one girl qualify for the state meet when junior Makayla Leiker tied for sixth in the high jump.

That year, per athletic.net archives, Hagerman and Smith helped Larned junior high post 55.92 seconds in the 400 relay. Hagerman delivered 30-5.25 in the triple jump. Both marks were the Indians’ best in junior high since 2016. After the missed ’20 season, Hagerman was excited for this spring.

Hagerman finished second in overall ratio results among the 24 competitors under 124 pounds, only behind Pratt’s Jadyn Thompson, a two-time all-state wrestler. Hagerman weighed 108 pounds. She benched 110, squatted 195 and cleaned 135 for a total ratio of 4.07. Thompson was just ahead at 4.09 ratio. Notably, Remy called Hagerman’s squat “really impressive.”

“I would be happy with 1.5 times your body weight there,” Remy said of the squat. “That’s been a big thing for her is buying into the weight room.”

“We have a strong group of girls,” Remy said.

For Larned, Remy coaches sprints and relays. The staff has third-year assistant Cody Coleman and Coles, in his second year on staff. Assistants Scott Upson and Gary Wagner have a combined 42 years on the Indian staff. Wagner is well-known as the longtime Larned radio voice.

At La Crosse, Remy said he was “kind of rusty” with track entries. The normal pre-track meet coaches’ meeting had concluded, and Remy had some kids he forgot to enter. He went back to finish. Coles was with the high jumpers. Then, Coleman and Remy walked down to the horizontal jumps and observed the boys’ triple jump and followed by the girls’ triple jump. Coles joined them after the high jump concluded. All three watched Hagerman.

Remy remembered that, in the week before Spring Break, Hagerman jumped 36 feet in practice, though had scratched.

“She has a really good first and third phase, and we know that,” Coles said. “So we have actually been doing a lot of work to try to improve that second phase.”

Remy had seen the weight room and track improvements and was hoping for 33-34 feet.

“I was just preparing in practice and working on speed and jumping obviously,” Hagerman said. “I was getting ready to go.”

Then, Hagerman uncorked her first big jump to punctuate a strong opening meet for the Larned, a team performance Remy long saw coming.

“The first time they have a track meet, and then the results do bear that out that, ‘Hey, coach wasn’t just lying to us just to be self-serving,’” Remy said. “Like it actually did play out that way. We have got some good girls.”