v Macy Smith of Olpe earns SIK 1A-I Player of the Year - Sports in Kansas 
Warning: include(../includes/bodytag.php): failed to open stream: No such file or directory in /home/kansass/public_html/ks/news/index.php on line 36 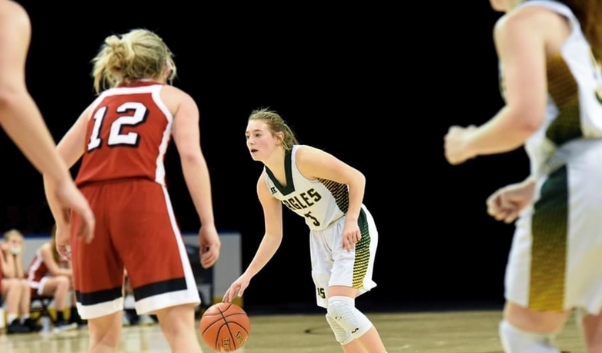 Olpe senior Macy Smith is considered the best point guard in the 44-year Jesse Nelson era. The 5-foot-4 Smith led the senior-laden Eagles to a 25-0 record and Class 1A, Division I state title, the fourth with Nelson. This winter, Smith delivered 14 points, 4.9 assists, 4.8 steals and 3.3 rebounds a contest. Olpe defeated Hodgeman County, 38-21, in the state semifinals and then defeated Norwich, 42-25, in the state championship game.

Olpe also went 26-0 last year and was a Class 1A Forever Four squad. This winter, Olpe set an all-classes all-time state record with just 73 points permitted, the fewest ever in three state tournament games. Smith delivered nine points, four assists and three rebounds and helped hold Hodgeman County to 30 percent shooting in the state semifinals. In the state championship game, Smith was the best player on the floor with 13 points, six steals and five assists, all game-bests in a 42-25 win versus Norwich. She helped Olpe hold Norwich to 31 percent shooting. Olpe committed just three turnovers, Norwich 18.

Smith was part of a six-member senior class that went 120-2 combined in junior high and high school, including 98-2 in high school. Nelson said the group was coming on since sixth grade. The other seniors included: Camille Steffes, Marley Heins, Maya Bishop, Hattie Fisher and Lauryn Broyles. Bishop and Fisher were classification POY finalists. Smith thrice earned first team all-league after honorable mention all-state as a freshman.

Sports in Kansas 1A-I Player of the Year Finalists