v Kylee Scheer earns third straight 3A POY honor from SIK - Sports in Kansas 
Warning: include(../includes/bodytag.php): failed to open stream: No such file or directory in /home/kansass/public_html/ks/news/index.php on line 36 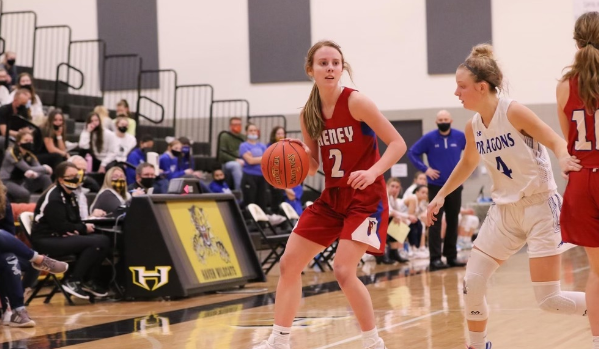 2021 Sports in Kansas 3A Girls Basketball Player of the Year

Kylee Scheer and Cheney delivered a memorable season this winter. Scheer, a senior point guard, has signed with Emporia State and is a three-time 3A SIK Player of the Year, the first to do that at the 3A level at Sports in Kansas. Cheney was ranked No. 1 in 3A all season after state runner-up and 3A Forever Four the last two seasons. Scheer played for her dad, Rod, and led Cheney to a 25-0 record. It marked the Cardinals’ second all-time girls’ crown. In 2010, Cheney finished 26-0 with Rod Scheer as an assistant coach, and Kylee’s sister, Payton, as a key player. Older brother, Trent, was also an SIK POY finalist in 3A back in 2018 and now plays for Baker.

Kylee finished her career on a 36-game winning streak. The Most Outstanding Player in the 3A state tournament, Scheer tallied 77 points at state. Overall, she delivered 22.7 points, 5.4 rebounds, 4.3 steals, and 2.4 assists per contest. Junior Brynn McCormick, a first-year transfer from Scott City, was the team’s second-leading scorer with 11.1 points per game.

Scheer and best friend Lexi Cline were the Cardinals’ lone seniors who played significant time. The 5-foot-8 Scheer, known for her leadership, finished her career with 1,790 points, 411 rebounds, 327 steals and 160 assists. Scheer sunk 214 career treys and was an impressive finisher inside the arc. She made 60 percent of her 2s this winter and 58 percent of her 2s for her career. Scheer and Cheney were one of the seminal teams and storylines of the 2020-21 basketball season. Scheer will go down as one of the most accomplished 3A players in Kansas history w/ three player of the year honors in the class along with an undefeated state title, Forever Four (2020) and state runner-up finish (2019). She was also a very rare three-time player of the year honoree in one of the most competitive classes in Kansas. Other players at SIK to earn 3x POY honors in basketball - boys or girls: Dean Wade (St. John 1A-I,2A 2013-2015), Kennedy Brown (Derby 6A 2017-2019), Payton Verhulst (Miege 4A 2019-2021). Emily Ryan of Central Plains is the only four-time selection (2017-2020) at Sports in Kansas for her classification (1A).

The Cheney Alumni Association would like to congratulate the 2021 Cheney girls basketball team on the 3A undefeated state championship. Congrats to all players and coaches on their success this season.

Wheat State Elite is a proud supporter of high school girls basketball in Kansas. Congrats to our very own Kylee Scheer on the 3A POY and state title for Cheney. We are proud of you & your teammates. - Wheat State Elite, Dylan Evans.