v Beatrice Culliton named Sports in Kansas 5A Player of Yr - Sports in Kansas 
Warning: include(../includes/bodytag.php): failed to open stream: No such file or directory in /home/kansass/public_html/ks/news/index.php on line 36

Beatrice Culliton named Sports in Kansas 5A Player of Yr 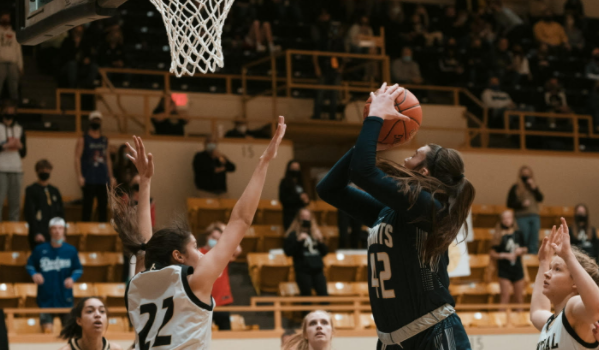 2021 Sports in Kansas 5A Girls Basketball Player of the Year

This winter, she finished with 13.3 points, 8.6 rebounds and 2.5 assists per game and helped the 20-2 Saints to the state title under longtime coach Rick Hetzel. Culliton was Aquinas’ lone player to average double figures. Aquinas had nine state titles with Hetzel, all since 2001. The Saints have recently won state titles in ’16, ’17, ’18, ’19, Forever Four in ’20 and champion again this winter. Culliton won a close race for 5A Player of the Year in a pack that included Aquinas point guard Madison Skelton and AC’s duo of Bailey Wilborn and Brittany Harshaw.

Culliton holds the Aquinas single game rebounding record when she delivered 27 points and 20 rebounds in a Jan. 9, 2021 win versus Blue Springs. Culliton carries a 4.0 GPA and is a two-time Eastern Kansas League first team selection. She was the ’21 classification Most Outstanding Player at the 5A state tournament.

Overall, she has 864 career points and has a strong chance to become Aquinas’ all-time leading scorer. Sereena Weledji, currently playing at Ivy League’s Penn, holds the mark with 1,162 points from ’14-18. Two players in Aquinas history have cleared 1,000 career points.

As well, Culliton shot 60.7 percent and 64.7 percent the last two years, the second and third best field goal percentages in Aquinas history. The record is 66 percent set by Allison Thomas in 2018. Culliton has 483 career records, fifth-time. The record is 689.

Skelton, an Emporia State signing, finishes her career fourth all-time in Aquinas annals with 285 assists. She sunk 43 treys this winter, most by a Saint in five years. She had at least 76 assists in each of the last three seasons. Skelton made five treys on March 5 versus Spring Hill, tied for second-best in a single game in school annals.

Congrats to Beatrice Culliton on the 2021 SIK 5A POY. We are so incredibly proud of you! From your biggest fans- Mom, Dad, Brett, Cale & Milton!