v Kennedy Taylor named Sports in Kansas 6A Player of Year - Sports in Kansas 
Warning: include(../includes/bodytag.php): failed to open stream: No such file or directory in /home/kansass/public_html/ks/news/index.php on line 36

Kennedy Taylor named Sports in Kansas 6A Player of Year

Kennedy Taylor (pictured right) is the 2021 6A Player of the Year. 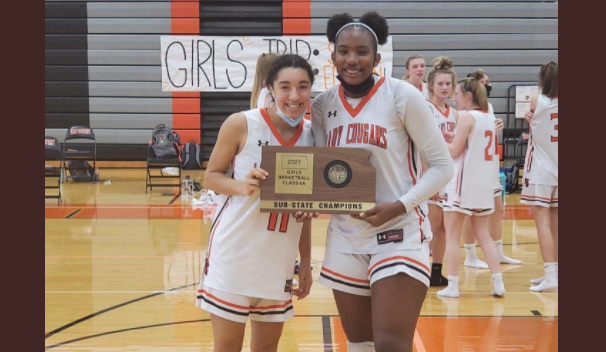 Shawnee Mission Northwest senior 6-foot-2 forward Kennedy Taylor has signed with University of Colorado and collected Sunflower League Player of the Year, along with first team all-state and a McDonald’s All-American nomination, too. Taylor earned 6A co-Most Outstanding Player at the state tournament. Overall, Taylor delivered 16.2 points, 12.1 rebounds and two blocks a game. Taylor led Shawnee Mission Northwest to a 23-0 record, Class 6A state title and the consensus top team in Kansas. SMNW defeated eventual 4A champion Bishop Miege in the regular season, the Stags’ lone loss to a Kansas team in the last three years. Northwest and 3A Cheney girls were the lone undefeated teams in Kansas for boys or girls this winter. This winter, the Cougars won the Sunflower League for the first time since 2015.

Taylor paced SMNW to its first-ever girls’ title. Northwest had previously taken second in ’16, its only other state championship game appearance in program history. Taylor matched up with outstanding Topeka High junior forward NiJaree Canady in the state championship game, and the pair split the 6A MOP honor at state. Taylor finished with 23 points and 19 rebounds in the semifinals, along with 15 points and nine rebounds in the championship game. Northwest defeated Blue Valley, 36-29, in the state quarterfinals. In the semifinals, Northwest beat Olathe West, 59-45, before the 61-54 victory against Topeka in the finals. As a junior, Taylor averaged 16 points and nine rebounds and was first team all-Sunflower League.