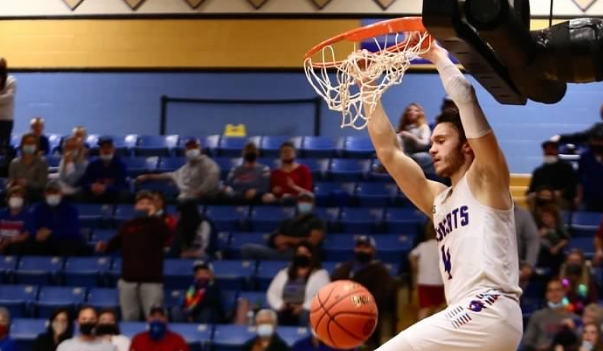 The 6-foot-1, 180-pound Jueneman, a junior, has delivered a 40-inch vertical and many highlight reel dunks. He helped Hanover roll to the Class 1A, Division II state title. Hanover again captured eight-man football and boys’ basketball crowns in the same year. Jueneman finished with 18 points, 4.5 assists and three rebounds a contest. Hanover has seven players who can dunk for a school that has roughly 20 to 30 boys in the entire school. A video of them dunking during state week went viral on SIK with over 1-million views.

Hanover, which ended the season on a 20-game winning streak, averaged 64 points per game with 18 assists and 15 steals a contest.

Jueneman was the team’s leading scorer, though three other players – seniors Blake Hynek and Jacob Jueneman and junior Keagan Dimler – all averaged between 9.6 and 12.7 points per contest. Hanover cruised through the postseason with wins of 74-37, 71-37, 85-58 and 52-40 in its last four contests.

In football, Jueneman finished with 22 catches for 418 yards and nine scores for the undefeated Wildcats. That included a pair of receiving scores in the championship game.

1A-II Sports in Kansas Player of the Year Finalists