v Brett Sarwinski of Galena named 3A Player of the Year - Sports in Kansas 
Warning: include(../includes/bodytag.php): failed to open stream: No such file or directory in /home/kansass/public_html/ks/news/index.php on line 36

Brett Sarwinski of Galena named 3A Player of the Year

Brett Sarwinski and Cason Richardson put on a show in the 3A title game. 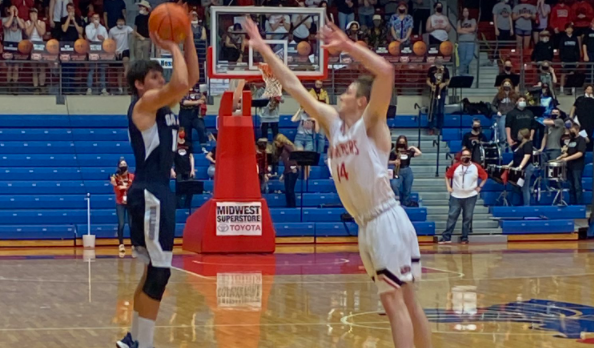 2021 Sports in Kansas 3A Basketball Player of the Year

Galena junior point guard Brett Sarwinski led the Bulldogs to a 3A state runner-up finish to Hesston in the schools first ever state title game appearance. Sarwinski averaged 18 points, five rebounds, four assists and two steals per game. Class 3A’s final four featured Galena, Rock Creek, Thomas More Prep-Marian and Hesston. Sarwinski won the tightest player of the year race we had this year between Dawson Zenger (the classes best scorer) of Rock Creek and Cason Richardson of Hesston (Co-MOP of the State Tourney). Anyone who watched the entire 3A state tournament knows these three could bring it. Those four teams featured likely the four best players in 3A: Sarwinski, Rock Creek’s Zenger, TMP’s Jackson Schulte and Hesston’s Richardson. Sarwinski had a game-high 19 points on Hesston in the title game while delivering a rare point guard rebound/points double-double against Rock Creek in the semifinal win along with three assists. Sarwinski was the most complete guard offensively and defensively in the classification to earn the nod in a loaded classification.

In the semifinals, Galena defeated Rock Creek, 48-41. Sarwinski is known for its high basketball IQ and can control the pace of a game as good as any point guard in Kansas. Galena allowed just three teams to score more than 50 points, two before holiday break. Rock Creek averaged 65 points per game.

Against Rock Creek, Sarwinski delivered 12 points,10 rebounds and three assists to give Galena its first-ever state title game berth. Sarwinski finished with 19 points in the state title game. He was a first team all-state 3A pick last winter. Sarwinski and Richardson were the co-Most Outstanding Players of the 2021 state tournament.

Sarwinski and Little were the lone two unanimous first team selections in the CNC. Sarwinski’s sister, Mia, is a sophomore and was also first team all-league. The 5-foot-11 Brett comes from a long line of athletes in his family. Sarwinski has started as Galena’s quarterback the last two seasons . His older brothers, P.J. and Nick, have played for Pittsburg State University football. Their dad, Beau, is Galena’s veteran football coach and athletic director/assistant principal.

Galena High School, Galena Bulldog Booster Club, Red Onion Cafe in Galena and Gravy's Bar & Grill would like to congratulate Brett Sarwinski on the 3A Player of the Year from Sports in Kansas. Congrats to the Bulldogs on an amazing 2020-2021 season as the 3A State Runner-Up, we are very proud of you all!

3A Sports in Kansas Player of the Year Finalists