v Javon Grant of Pittsburg named SIK 5A Player of Year - Sports in Kansas 
Warning: include(../includes/bodytag.php): failed to open stream: No such file or directory in /home/kansass/public_html/ks/news/index.php on line 36

Javon Grant of Pittsburg named SIK 5A Player of Year

Javon Grant of Pittsburg named 5A Player of the Year. (photo: Sean Frye) 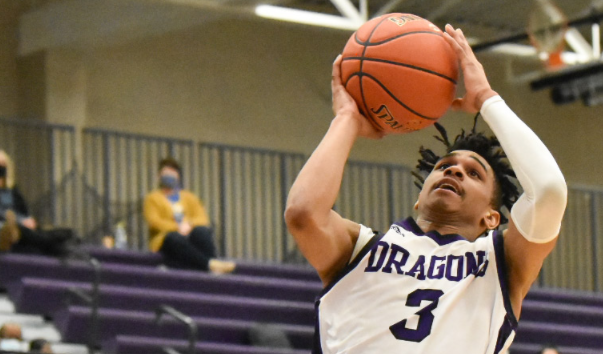 2021 Sports in Kansas 5A Boys Basketball Player of the Year

Class 5A champion Maize, 5A runner-up Topeka West and one-loss Hays High all had at least two player of the year candidates. Pittsburg’s Javon Grant had the singular season in Class 5A. He led the Purple Dragons to a 17-7 record. The 5-foot-11 point guard averaged 29.8 points per game with 11 30-point games and three 40-point games. Grant delivered 5.7 rebounds, 5.2 assists, 2.8 steals and shot 48 percent from the field. He sunk 68 treys and shot 37 percent from long range. As well, Grant shot 81 percent from the foul line. Grant is a three-time all 5A-pick from Sports in Kansas.

Grant has an offer from Division I Bryant. He has also received interest from MIAA’s Rogers State and Emporia State, along with Division I’s Southeast Missouri State and SIU-Edwardsville. Grant scored 32 points in the 69-66 sub-state semifinal victory against Blue Valley Southwest. Then, Grant scored 41 points in an 82-52 win versus Spring Hill in the championship game. Grant also finished 5 of 8 from 3-point range, eight rebounds, five assists and five steals in the Spring Hill win. Grant was the lone unanimous first team all-SEK selection. Pittsburg has reached the state tournament four straight years. Before then, the Purple Dragons’ last state appearances came in ’85-86 and ’97, per Kansas historian Carol Swenson. Pittsburg could have three players in Division I basketball next season with Marque English (Northern Colorado), Gavyn Elkamil (Tulsa) and wherever Grant signs.

Congratulations to Javon Grant on being selected as the 5A Player of the Year by Sports in Kansas! Pittsburg High School and the community of Pittsburg are proud of you! #DPKA

5A Sports in Kansas Player of the Year Finalists