v Basketball in Kansas: Looking at the State Tournaments - Sports in Kansas 
Warning: include(../includes/bodytag.php): failed to open stream: No such file or directory in /home/kansass/public_html/ks/news/index.php on line 36

Basketball in Kansas: Looking at the State Tournaments 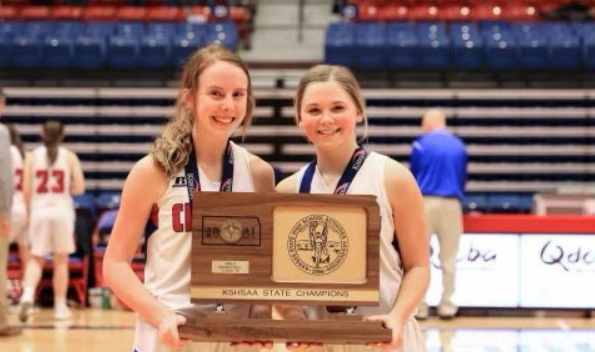 The Stags had 22 points from Harrison Braudis, 18 by Taj Manning, 16 from Mark Mitchell and 14 by Christian Bowen-Webb. Mitchell is a five-star recruit with multiple high Division I offers, including University of Kansas, Kansas State, Missouri and North Carolina. Miege improved to 6-3 all-time in state title games and won its first crown since 2018.

In ’19, Miege fell, 46-45, to Chanute in sub-state in one of Kansas’ all-time great upsets. Last year, Miege was a 4A Forever Four team when the tournament was cancelled in the state semifinals because of the coronavirus. The Stags collected a 22-1 mark, and Louisburg was 18-7.

Class 6A Shawnee Mission Northwest (23-0), Cheney (25-0) and 1A-I Olpe (25-0) completed undefeated years on the girls. Olpe swept 1A-I boys and girls. Miege girls again beat McPherson, 51-36, in the 4A final. The Stags moved to 22-6 all-time in championships, all with coach Terry English. Miege swept volleyball and basketball. English by far has the most titles in Kansas history.

Miege girls finished 23-1 with its only loss to 6A Shawnee Mission Northwest. Miege outscored McPherson, 15-6, in the fourth quarter. Gabi Henderson-Artis and Payton Verhulst delivered 14 points for Miege. Verhulst is a Louisville signing and McDonalds’ All-American.

Cheney lost in overtime in the ’19 final and was a Forever Four team last winter. The Cardinals were ranked No. 1 all season in close contested 3A.

Scheer and Cline are longtime best friends who completed careers with their first-ever state titles after multiple close runs in volleyball, basketball and softball.

Cline came back from injury down the stretch. In one of the season’s best moments, Cheney coach Rod Scheer hugged his daughter, Payton, after the 2010 Cardinal championship, and then got to hug Kylee on Saturday. Payton and a much younger Kylie took a photo together in ’10 and replicated it again 11 years later. Sports run big in the family as Trent Scheer, the middle sibling and brother, was a 2018 Sports in Kansas 3A POY FInalist for basketball and now plays at Baker. Payton is new head volleyball coach at Nickerson starting this fall.

Kylee is the two-time 3A Player of the Year (this season has not yet been announced) and has signed with Emporia State. Scheer was first team all-league. She averaged 22 points, five rebounds and four steals this season and racked up 77 points over the 2021 state tournament. Brynn McCormick and Brooklyn Wewe earned second team, and Cline honorable mention. McCormick transferred from Scott City to Cheney. Her mom, Sarah, was a Cheney standout and served as the Cardinals’ assistant coach.

Topeka High is 6A runner-up, 6A undefeated Forever Four and 6A runner-up in the last three seasons. As well, Dodge City girls had a final four season, went 21-2 and had its best record in school annals.

On the boys’ side, Maize was undefeated two years ago entering state under Caleb Grill, the state’s consensus best player and now at Nevada-Las Vegas. Maize reached the final four. This year, the Eagles won their first-ever boys’ crown under coach Chris Grill, Caleb’s father.

Topeka West (21-3) played for its first title since 2010 and dropped to 0-3 all-time in finals. However, great credit to TW and longtime coach Rick Bloomquist, who battled cancer throughout the season.

Hillsboro boys defeated Wabaunsee, 59-50. Hillsboro won the fourth state title in school history and first since 1998. Wabaunsee made a Cinderella run to the finals, including a final four win versus undefeated and top-ranked Hoxie. Hillsboro finished 23-3, and Wabaunsee was 13-3.

Hillsboro coach Darrel Knoll has won 562 games in 33 years with the Trojans. Hillsboro was a Forever Four squad last winter.

Both 2A girls finalists finished with the best seasons in school annals.

Sterling defeated Pittsburg Colgan, 52-36. The Black Bears finished 24-1, and Colgan was 20-4. Sterling won the first girls’ title in Black Bear history. The Black Bears lost to Garden Plain in the 2A finale in ’19 and lost to GP in the state quarterfinals last year. This season, Sterling, led by junior point guard Kali Briar, beat Garden Plain in the final four. Longtime coach Jill Rowland has continued her high level of success at Sterling.

Under coach Abby Farabi, Colgan won the first state games in school history. In the semifinals, Colgan beat Valley Heights, 40-38, on a buzzer-beater from freshman Lily Brown (video on the SIK Facebook went viral with over 110,000 views Saturday). She moved into the starting lineup for the last 11 games and changed the course of Colgan’s season. Colgan has a very bright future and one of the best young coaches in Kansas on its bench.

Central Plains had its state record 138-game winning streak end in December, though still won its seventh consecutive state title. CP won from ’14-19 and was the heavy favorite last season before the tournament was cancelled in the semifinals. Junior Kassidy Nixon continued her huge career with 14 points, 11 rebounds, four assists and three steaks. Sophomore Brynna Hammeke averaged nearly 23 points a game at state.

Hanover improved to 7-3 all-time in state title games and won its first crown since 2017. The first six titles came under longtime coach Kim Lohse. Hanover finished 24-1. On another note, Hanover dunk video on Sports in Kansas Facebook went viral over the weekend with over 600,000 views as of Monday morning. Hanover, who has around 50-60 students in the high school through four grades per year has seven players on their team, the video highlighted six of those players dunking in a shoot-around at Great Bend on Friday. Combined on all SIK platforms it has close to 800,000 views.

Coach Chris Schmidt led Olpe football to the 1A crown in the fall. The Eagles won their first-ever boys’ basketball title. Olpe delivered upsets against Little River and South Gray.

Stiles, Nelson and Schmidt have all coached at least 24 years at their respective schools in various levels of basketball.