v Sports in Kansas: Girls Semifinal Recap - Bball - Sports in Kansas 
Warning: include(../includes/bodytag.php): failed to open stream: No such file or directory in /home/kansass/public_html/ks/news/index.php on line 36

Andover Central is the team to beat in 5A. 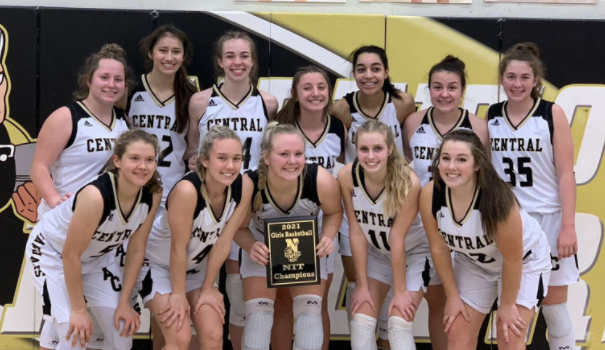 Brynna Hammeke had 25 points for Central Plains along with nine points and 11 boards from Kassidy Nixon to put the Oilers back into the title game. Golden Plains finished the season with a 24-1 record with their only loss coming in the title game. Brooke Stoll and Ashley Stoll combined for 26 points for GP.

Morgan Meyers had 28 points and five steals to lead Cunningham to the title game along with 11 rebounds from Maddie McGuire. St. Johns Tipton was led by their all-stater Lauryn Dubbert who had 18 points in her final game at SJT. Cunningham had 10 steals and caused 17 turnovers.

Marley Heins led the Eagles with 15 points while Macy Smith had nine points and four assists, along with six points and six boards from Lauryn Broyles as the Eagles remain unbeaten on the year. They have dominated most of their competition throughout the entire year. Olpe forced 34 turnovers on Hodgeman County and only committed eight as a team for long time head coach Jesse Nelson, who has well over 900 plus wins. Grace Shiew was the top scorer for Hodgeman with six points.

Norwich got 20 points from Brittany Gosch and 12 a piece from Kira Kelly and Avery Rosengagan. Norwich attempted just five threes and made one but shot 47% from the field. Avery Weathersbee (16 points) and Chloe Clevenger (10 points) led Doniphan West in the semifinal in first ever trip to the state tournament. Norwich used a 20-14 third quarter and a 15-8 fourth quarter to advance to the final against state power Olpe.

Frontenac had an impressive first quarter with a 14-11 first quarter but then Cheney went on a 20-4 run over the second quarter to lead 31-18 at the half. The Raiders also had a solid third quarter outscoring the Cardinals 22-13 but it was all Cheney with a 18-6 fourth quarter to give them a 62-46 win advancing into the title game for the second time in three years under head coach Rod Scheer. All-Everything Kylee Scheer was as good as advertised with 8-of-17 performance from the floor with 5-of-8 from three prointers with 23 points, three steals and four rebounds. Brynn McCormick had 14 points for the Cardinals along with six boards. Cheney had six blocks as team in the game and causes 17 Raider turnovers. FHS was led by 14 points from Heather Arnett and 10 from Hattie Pyle who aso had six assists. Cheney (24-0) is looking for their first state title since 2010 as they get a very talented Sabetha squad on Saturday at 2 pm.

Tie ballgame with just seconds remaining and a Melinna Schumann pass hit Leah Renyer for a buzzer beater as time expired to send Sabetha into the state title game with a 57-55 victory over Hugoton. This was likely the game of the tournament along with Halstead and Cheney (first round at Cheney, 2 OT). However it’s not the first wild game for Sabetha who won in OT versus Royal Valley (the last 3A champ in 2019) and #1 sub-state seed Nemaha Central in double OT in the sub-state championship last week. The Sabetha group is 64-3 in volleyball (3A champs) and basketball combined. Schumann had 20 points while Renyer had a team-high 21 points. Mikyn Hamlin had 22 points for the Eagles and is just a sophomore. Jordyn Beard had a great game for Hugoton in her final one with a crazy stat line: eight points, 14 rebounds, seven blocks. Hugoton had just two losses on the year. Big 7 basketball is no joke.

AC improved to 24-0 on the season despite just going 5-of-29 from three pointer on Thursday in Emporia. Brittany Harshaw has been outstanding all year and was as good as advertised with 23 points and nine rebounds. The junior has committed to Creighton. Amekporfor also had 12 points and 11 boards for the Jaguars while Bailey Wilborn had 15 points. Wilborn has signed with Maine at the Division I level. Aubrie Kierscht, one of the best shooters in Kansas, struggled from 3P (3-17) on Thursday but still had 21 points in the game for a very solid outing for the Mustangs. Mykayla Cunningham also had 16 points and 11 rebounds. AC would outscore SC 28-14 in the final quarter.

Aquinas cruised to another title game berth with a 11-2 first quarter and 26-8 third quarter to win 64-44 on Thursday evening in Emporia. Aquinas got 14 points from Division I recruit Beatrice Culliton along with 11 boards while Charlotte O’Keefe had 12 points (8 boards). Jamya McPherson and Madison Skelton each had nine points, with ESU signee Skelton adding five assists on the court she will play on next season.