v American Implement Team of the Week: South Gray Boys BB - Sports in Kansas 
Warning: include(../includes/bodytag.php): failed to open stream: No such file or directory in /home/kansass/public_html/ks/news/index.php on line 36 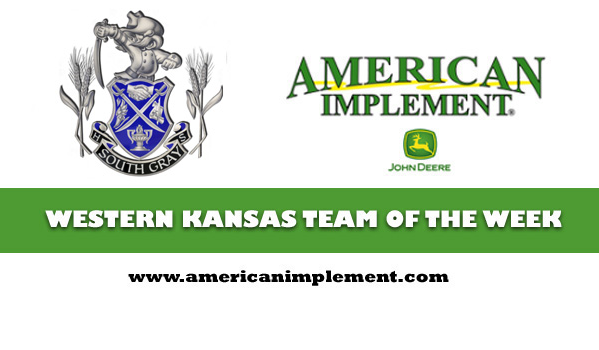 South Gray made one trey, on its first basket of the game. Meade led in the first quarter and had the advantage late in the first half before SG senior center Carter Riley delivered several big plays. South Gray eventually won 54-44. Afterward, 39th-year coach Mark Applegate gave credit to the Buffaloes, though was visibly frustrated in his team’s performance.

“Meade’s a good team,” Applegate said. “We knew coming in that they were going to be scrappy and they were going to go after the ball, and they did. I mean, the first half, we really didn’t play very well at all. The second half was better than the first, but we could have played better.”

South Gray’s continued matchups with Meade shaped the rest of its season. On Feb. 9, the Rebels won at Meade, 75-54. Riley finished with 24 points and 10 rebounds, and senior Kimble Martin delivered 11 assists. South Gray shot an impressive 10 of 22 from 3-point range.

“We have got kids that can hit 3s,” Applegate said.

On Saturday, South Gray showed further improvement with a 73-44 win versus Meade in the Class 1A, Division I sub-state championship game. South Gray was ranked second in the classification, Little River fifth.

Meade lost five times, four to the Rebels. Sub-state marked the biggest margin of victory for South Gray against Meade. South Gray shot 55 percent from the field and 10 of 25 (40 percent) on treys. Senior Aaron Skidmore had a big steal and dunk that put SG up 71-40 with just over minutes left.

“We have to rely on our execution of our offense,” Applegate said.

In a neat social media moment posted by South Gray principal Kim Batman, Applegate – in his usual suit and tie - came into the locker room and delivered a celebration dance with his players after sub-state.

Top-ranked Little River and South Gray have been the clear top-two favorites in Class 1A, Division I year. LR, a 1A Forever Four team last winter, features senior Jayden Garrison, who recently cleared 2,000 career points and is arguably a Top 5 player for all classes.

On Tuesday, Pratt-Skyline (15-6) travels to Montezuma to meet the 22-0 Rebels in the state quarterfinals. Winners of the four quarterfinal games will advance to United Wireless Arena for the semifinals and championships. In other games, Stockton (10-11) is at Ness City (16-7). Clifton-Clyde (20-2) is at Little River (21-1). Olpe (15-3) faces Wichita Classical, 18-3 in its first-ever state showing. South Gray, 2A Hoxie and 5A Hays High are the state's lone undefeated boys' teams.

The second Meade game still represents South Gray’s closest margin all year. South Gray has won four state titles with Applegate: ’97, ’07, ’08 and ’18. The ’18 squad is Applegate’s only undefeated team, though some of his other past great squads purposefully played bigger schools in the Dodge City Tournament of Champions for more competition. Applegate has more than 715 career wins at South Gray.

In ’19 and ’20, South Gray finished 22-2 and 21-4, though had rare years where it did not win the league tournament or reach state. The Rebels lost to St. John in the 1A sub-state championship game last winter. Class 1A split back into two classes this winter. South Gray returned all of its key players from ’19-20.

In the fall, SG had a surprise football run with an 8-2 showing. In late regular season, SIK named Riley and the SG offensive line as among the state’s most underrated players for all classes. The 6-foot-5, 250-pound Riley, the team’s center, played football just two years and signed with Dodge City Community College.

Applegate noted Riley’s football helped in basketball. Riley is at 14.1 points and 7.3 rebounds a contest. He averaged nine points and 5.4 rebounds as a junior.

“He has improved immensely,” Applegate said. “Carter has – he has turned into a really good post.”

Junior Brady Deges is at 13.8 points, three assists, three rebounds and two steals per game. He has made at least one trey in every game except a 42-point blowout victory.