v Wrestling in Kansas: State Tournament Recap 2021 - Sports in Kansas 
Warning: include(../includes/bodytag.php): failed to open stream: No such file or directory in /home/kansass/public_html/ks/news/index.php on line 36

Hoxie dominated the 3-2-1A tournament in Hays. 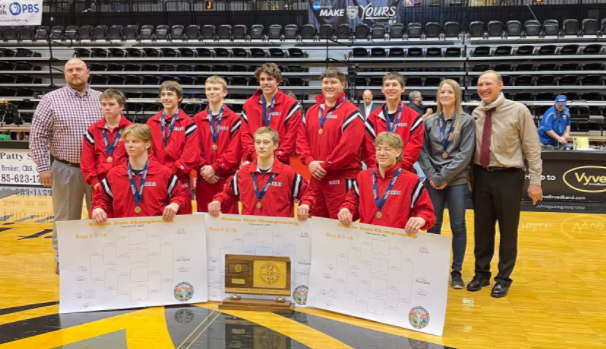 (CLICK HERE FOR SPORTS IN KANSAS ALL-STATE WRESTLING - BE SURE TO ORDER YOUR PATCHES FOR SUB-STATE, STATE QUALIFIER AND ALL-STATE, WE ARE THE ONLY PLACE WITH THESE)

Paola senior Jordyn Knecht accomplished all her individual goals during a nationally ranked career – including an extremely rare achievement for the state championship last Friday in Salina.

Knecht, a two-time state titlist, completed her second straight undefeated season. Plus, she pinned her three opponents in a combined 59 seconds, an almost unheard of combined time. Knecht, long known for her elite success and bubbly personality, wore her normal smile shortly after the award ceremony. She delivered a 66-0 mark the last two seasons, the most wins for a Kansas girl without a loss in that stretch.

She picked up an 8-2 win in the semifinals and defeated Marysville’s Elise Rose, 8-4, in the most anticipated finals match of 2020. Rose, then nationally ranked, went 17-1.

Then, Knecht, like many athletes, missed the summer season because of the coronavirus. A national champion wakesurfer, Knecht was able to surf some last summer, notably an excellent showing at a tournament in August in Texas. The injury and then time away last summer impacted Knecht.

“When something that you don’t realize is so important is taken away from you, it gives you a real big kick in the butt and makes you realize it,” Knecht said. “I definitely missed it when I was hurt and … especially over COVID, that stuff, I really missed my summer wrestling.”

This winter, girls’ wrestling split into two classes. Division I had 5-6A, and Division II with 4-1A. Kansas had just under 1,000 girls wrestle this winter. Baldwin, Pratt, Mulvane and Dodge City were among those with highly successful growth that yielded state results.

“It’s definitely on its uphill climb,” Knecht said. “It’s grown big, and it’s going to keep going. I have like real big faith in the sport for here.”

Many of Knecht’s former Team Kansas teammates, including Nickerson’s Nikki Moore, Junction City’s Elisa Robinson and Onaga’s Morgan Mayginnes, graduated and are currently wrestling for Baker University. They have helped Baker become a top-10 NAIA program nationally. Those four were among the top trailblazers to help sanction girls’ wrestling.

Knecht was the consensus top girl wrestler in Kansas this winter. Rose, Gray, Council Grove’s Ziegler, McPherson’s Holli Giddings, Abilene’s Skyleigh Pflaster were among those that competed with Knecht, Robinson, Mayginnes and Moore for Team Kansas at the 2019 Junior Women National Duals.

“Definitely miss my girls,” Knecht said. “It’s different without them. Like growing up with wrestling with all of them, so having not as many of them was a big change but being at the top is cool.”

For her senior year, Knecht set goals to win top wrestler honors at each of the postseason competitions, which she accomplished. In the last national girls’ high school rankings, Knecht was ranked No. 16. At the Tony Pizza’s Events Center, Knecht opened as the significant favorite in the eight-girl bracket at 126 pounds.

Knecht finished her season 36-0. She pinned Phillipsburg freshman Isabella Keesee in 21 seconds in the quarterfinals. In the semifinals, Knecht faced Ellis junior Haley Cranwell. Like Knecht, Cranwell is highly talented in another non-KSHSAA sport.

Cranwell, who moved from Nebraska to Kansas several years ago because of her dad’s job, is a standout hockey player. After state wrestling, Cranwell went back to Nebraska and helped her team take second in the Nebraska high school hockey tournament. Cranwell played in 25 matches with the Tri-City Junior Storm from Nov. 1 to Feb. 28. The team lost just three matches and tied one.

Knecht again won by fall in 21 seconds. Cranwell finished fifth with a 24-6 mark. Knecht faced Konrade again in the championship.

Before the final, Knecht had received a text from a friend to try to pin all three opponents in collectively under a minute. Knecht set that as another goal. Knecht knew Konrade’s exact move. Konrade got her leg, Knecht locked the cradle and pinned her in 17 seconds. Total time for three matches – 59 seconds.

“I knew she was going to shoot right off the bat,” Knecht said.

Six girls achieved three pins at Division II state. WaKeeney-Trego senior Sydney Boyle, who finished third at 143, did it in a combined 3:59, the second-best collective time to Knecht. No other champion had three pins in under eight minutes of total time.

The entire field had six falls in 21 seconds or less. Knecht achieved half of those.

“It was a good last one to end my senior year,” she said with a smile.

For the second straight year, Paola took third in a close race, this time to Baldwin and Pratt. At 120, junior Kailyn Younger (26-2) earned her second straight runner-up. Senior Americus Harris (14-11) qualified at 191 and finished 0-2, including an ultimate tiebreaker loss. Knecht is uncertain about her future plans. She is looking at out-of-state colleges and possibly major in dental hygiene/nursing.

“It’s a good feeling,” Knecht said. “Not as high of a feeling as last year with the unexpected of it. We were definitely shooting higher this year, now that we knew that we had the chance to place higher, so a little downfall for what we are getting, but I am very proud of us as a team.”

Swift and Ziegler both matched Knecht with two state titles. Swift finished 32-2 and beat Ellis freshman Kaydawn Haag, 4-2, in the final. Both of Swift’s losses came to Haag.

Knecht’s dad, Joe, has played a hugely influential role in his daughter’s career. Joe and Livia’s dad, Geno, each has served as youth wrestling coaches in Paola and Pratt, respectively. Swift was ranked No. 25 nationally in January. Ziegler (14-1) captured the title at 170.

“My dad is kind of the same way I am,” Swift said. “We just get really excited for things. Kind of feel like we think the same. I love having both my parents, how all my needs and stuff – sometimes during COVID, it’s been hard this year for them not to be able to be there, and it drives them insane. I know it does, but they take advantage of when they can be here, and they love it. They love watching all my teammates and me.”

Team Kansas’ members Rose, Pflaster and Giddings all finished top-3 in 2021. Rose went 15-1 against girls this season and lost in an upset to Mission Valley freshman Hope Blake, 2-1, in the 132-pound final. In arguably the best championship match, Wellington sophomore Anna Cullens beat Pflaster, 6-4, in sudden victory at 109.

As SIK profiled last week, Washburn Rural had the opportunity to become the first team to win boys’ and girls’ wrestling titles in the same year. WR accomplished the feat with a 6A boys’ crown and Division I girls’ title. It marked the second straight girls’ wrestling championship for the Junior Blues and the first one in school history for the boys.

“I keep my eye on them and watch them succeed,” Knecht said.

At Division II 155, Ottawa’s Darby Weidl won, 13-5. Darby’s coach is her brother, Dalton. They are the only two Ottawa wrestling champions in school history. They are the first brother-sister combination to win state titles. Darby delivered a celebratory takedown on her brother on the mat. Dalton won his title in ’14 at the same venue.

Weidl, like many other top girl wrestlers, has enjoyed multi-sport success. She led Ottawa to a surprise final four state appearance in volleyball and cleared 1,000 career kills. Ridgeway, Rivera, Stean and Weidl were the first girls’ champions in program history.

Top Highlights from other classes

Bell is a junior, Bretz and Johnson are both sophomores. It marked the second crown for Bell and Johnson. Bretz went 4-3 against Oakley’s Eric Cain, including a 6-4 final wins.

Osage City’s Dane Whalen won his second straight crown in dominating fashion and finished 33-0. He is the only OC wrestling champion in school history. Whalen won at 220 as a junior and 285 this season.

At 170, Hoisington senior Joshua Ball (37-0) became the fourth Ball brother to win a title. They have combined for nine crowns. At 195, Cimarron senior Tate Seabolt (18-0) joined his brother, Josh, as the lone Bluejay wrestling titlists.

At 106, Mound City-Jayhawk Linn junior Corbin White went 31-1 with a championship. White is the first-ever winner for Jayhawk-Linn.

At 3-2-1A 152, Bryce Eck finished 37-2 and became the first champion – and state placer – ever in the seven-year Uniontown wrestling history.

In a matchup of two undefeated wrestlers at 220, Andale senior Cayden Winter beat Louisburg’s Alec Younggren, 9-5. Winter finished 22-0, and Younggren went 37-1. Andale also won 3A state football and will be a top favorite in track this spring.

Dodge City’s Damian Mendez, a 2019 champion, went 35-0 at 132. Haysville Campus senior Nathan Bowen finished 39-1 with the 145 title. Mendez is one of two DC wrestlers in school history to win more than one title.

In 5A, Goddard rolled to its seventh straight state title with 179 points. Maize was second with 124.5 points. For Goddard, freshman Zachary Wessley went 22-2 for the 132 championship.

At 138, Great Bend’s Wyatt Weber won by fall in 1:20 in the championship against Bonner Springs’ Cruz Lara. Weber went 32-3. Lara, a former state titlist, was 28-0 entering the match. GB coach Nathan Broeckelman has done an excellent job with the Panther wrestling programs – including second place for the girls in 2020. Ridgeway and Weber were his first two individual titlists. They are the first GB individual champions since 2013.

Also in 5A, Newton sophomore Nick Treaster (36-1) won at 106. Nick and his brothers have combined for five state crowns. Their dad, Matt Treaster, was a four-time titlist for Beloit from ’81-84.

Mill Valley senior Brodie Scott completed a 22-0 season at 195. Mill Valley senior Ethan Kremer completed his career with three state championships. Kremer, the two-time 5A defensive player of the year, captured three team titles in football and wrestling. Kremer won by fall in 4:41 in the final for a 20-1 mark.

Thanks to the kansashswrestling.com database for historical research.