Nemaha Central girls are a team to watch in 3A. 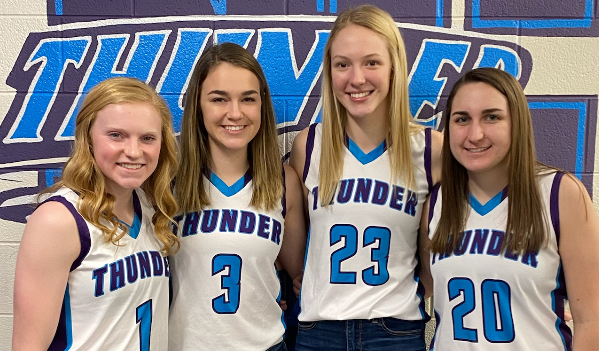 Hadden Hiltgen took over Nemaha Valley girls’ basketball 11 years ago. Early on, he had a goal of finishing with a winning record. Nemaha had notably posted 9-13, 3-15 and 7-13 marks the three previous seasons before he started, according to MaxPreps archives.

He enjoyed a six-win improvement to 13-10 in his first winter. In ’13-14, Hiltgen felt a shift in his program. That winter marked the last year before NV and nearby Baileyville B&B consolidated. B&B won the Class 1A, Division II state championship.

Hiltgen led Nemaha Valley to the state tournament for the first time in 11 years, per Kansas historian Carol Swenson. Hiltgen said the NV roster had “eight or nine” talented juniors and took third at state. The next season, Nemaha Central gained the Macke girls from B&B and had an experienced group.

“We just kind of continued to climb each year from there on out,” he said.

Nemaha Central has now reached state the last four seasons, including a 24-0 squad in Class 3A last winter. That team had its season curtailed in the state semifinals from COVID-19. NC has three final four showings in that stretch.

“We came home that day like we won state,” he said. “The girls cut down the net. That’s something that I wanted them to experience, because I think we deserved it, and kind of had that taken away from them, and we tried to make it as special as possible.”

At the beginning of each season, Hiltgen discusses “a lot” about team chemistry. This winter, NC has continued its longtime success with a remarkable 8-0 record in games decided by eight points or fewer. The Thunder, known for its grit and toughness, has come back from double-digit deficits several times.

“Teamwork, playing for one another and putting our individual goals and stuff kind of aside and putting the team first,” Hiltgen said. “So we talked about that a bunch, and the girls themselves do a great job.”

Notably, the 5-foot-9 Corby has emerged as a 3A Player of the Year candidate and came through in clutch situations several times.

“Very athletic,” Hiltgen said of Corby. “She can score inside and out, and defensively, she is all over the place, so it’s a good combination.”

Last week, NC finished the regular season 19-1 and captured the Big 7 title for a fourth straight year. Nemaha Central is ranked fourth in 3A, rival Sabetha is third in 3A, and Royal Valley stands ninth in 3A.

“The Big 7 is about as tough I feel in 3A basketball as you can get, boys and girls,” Hiltgen said.

All three of those Big 7 teams in the Sabetha sub-state that features six of eight teams at .500 or better. Top-ranked Nemaha Central plays at home versus Oskaloosa on Monday in the sub-state quarterfinals. Semifinals and finals are set for Thursday and Saturday, respectively.

Hiltgen has especially been pleased with the senior trio. He said they are the team’s hardest workers and stay after practice everyday to work on their game.

“They really do a good job of being leaders and really leading us and contributing on and off the court,” Hiltgen said.

The 6-foot-2 Rottinghaus has signed with Newman University after 6.6 points and 52 blocks as a junior. This winter, she has consistently ranked in the top-10 in Kansas in blocks with more than three a contest. Plus, Rottinghaus has become better at blocking without fouling.

“We were working on her just keeping her hands up when the ball goes in the post and moving laterally with it and not necessarily swatting like your volleyball spike you see a lot,” Hiltgen said. “It’s just getting her hand up and just flicking.”

Macke finished with 8.2 points and three assists per game as a junior and took over as the point guard this winter. Macke has missed the last couple of weeks with a shoulder injury. She delivered similar numbers to last season with 7.5 points, 2.5 assists and 2.2 steals. Hiltgen labeled Macke one of the toughest girls he has ever coached. He hoped Macke would return for sub-state.

“Just her presence on the floor will make us better,” Hiltgen said.

Junior Taryn Ganstrom has delivered three assists a contest after one a game in ’19-20. Since Macke went out, juniors McKynsey Henry and Cassidy Rethman have both stepped up.

Then, Corby has yielded a marked jump. Through mid-February, Corby was at 15.5 points, 5.8 rebounds, 3.8 steals and 3.5 assists per contest.

Corby has consistently made SIK statewide leaders for points, assists and steals. She has received multiple college basketball offers.

“A lot more confidence,” Hiltgen said. “I think she understands that Alleigh left, and someone needed to fill that void. She has always been a natural scorer, getting to the rim. …scoring in a variety of ways.”

Corby and Rottinghaus were each first team all-Big 7 in volleyball last fall. Corby finished with 159 kills, 237 digs, 30 aces. She was second in digs and kills. Hiltgen coaches the boys’ golf team in the spring, and Corby plays boys’ golf. Normally, a few girls qualify for boys’ state golf each season.

Corby plays from the same tees as the boys and has performed well.

Nemaha Central has prided itself on its man-to-man defense and permitted just 34 points per game. This season, NC has defeated Royal Valley twice: 65-55 on Dec. 18 and 52-49 on Feb. 12. RV features the Irving sisters who helped the program win the 2019 3A state title and ranks as one of the state’s best 3-point shooting teams.

In the second win against Royal Valley, Nemaha Central trailed by four with three minutes left. RV led by two with less than a minute to play. Korby tied the game. Then, she drove inside with three seconds remaining, drew the foul and made the game-winning shot.

NC also beat Holton by five, Spring Hill by eight and won the Wellsville midseason tournament. At Wellsville, Nemaha Central defeated Lansing, 40-35, on Jan. 28 and Louisburg, 52-48, on Jan. 30. Corby finished with 29 points against Louisburg, a game where NC rallied from a 14-point deficit. Nemaha Central came back in all three tournament contests.

Overall, Nemaha Central went a combined 7-1 against Royal Valley, Sabetha, Jefferson West, Lansing and Louisburg. Those teams are 67-13 against all other opponents. Lansing is ranked seventh in 5A, and Louisburg fifth in 4A.

“She has just taken her game to the next level,” Hiltgen said of Corby. “Really good on the attack and gets to the free throw line a lot.”