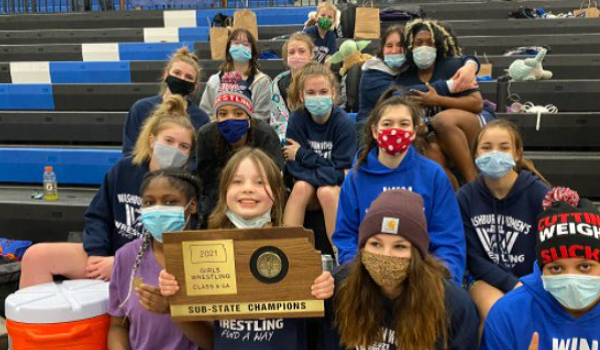 Damon Parker captured a pair of state wrestling titles for Manhattan in 1997-98. Parker competed for Manhattan’s Hall of Fame wrestling coach Lee Woodford, who led the Indians for 19 years. Woodford paced Manhattan to nine top-three finishes, including the 2004 state championship.

Parker arrived at Washburn Rural a decade ago after he taught kindergarten in Platte County, Mo. from 2003-11. He coached kids’ wrestling in Missouri, and WR marked his first head coaching job. Parker “loved” kindergarten and still sometimes misses the lower grade.

At the time, Rural had just one individual state champion since ’92. In the previous 26 seasons, the Junior Blues had finished in the top-10 five times, per KSHSAA archives. The best showing was fourth place in 1988. WR presented an opportunity to build a program and be closer to family.

“I kind of got the itch to do something else,” Parker said. “And knew I had something I could offer the wrestling community, and this was a good jumping off point.”

“I always thought of Washburn Rural as a sleeping giant,” Parker said. “We have a big student population, and I just thought with the facilities upgrades they had done here, we had a shot at turning this thing into something special, and we have been fortunate.”

Parker had a massive recruiting effort last winter in the first season of KSHSAA sanctioned girls’ wrestling. His top girls came from all backgrounds, including theater, marching band, softball and cheerleading. Rural had 62 girls and won the all-classes state championship.

Parker said “quite a few” coaches have contacted him about creating a girls’ program. He has delivered with videos, blogs and various media on girls’ wrestling.

“It’s flattering, but the girls are the ones doing the work,” Parker said. “We just got them in the room.”

In the room, Parker has long followed program-shaping advice from Woodford, his mentor.

“He told me, ‘The best thing you can do as a coach is get smart people, bring them in the room and let them work,” Parker said. “And don’t micromanage, and so that’s what we have tried to do. We play to the strengths to all of those coaches, and yeah, it’s worked out great for us.”

Parker’s staff has assistants for the boys and girls. The boys’ side features Duane Zlatnik, a three-time state champion at Rossville. He started 30 games on the Kansas offensive line and was an All Big 12 honorable mention lineman. Zlatnik has highly impacted WR’s upper weights.

“I have told people before, if they made a list of the top 500 wrestlers in Kansas history, I might sneak in at No. 499,” Parker said. “Duane’s in the top-5 in the history of the state. He was an absolute hammer when he was in high school, and that dude could have gone pretty much anywhere to go wrestle.”

Jordan Short, a Rural graduate and the only one on the coaching staff who predates Parker at WR, works with the lighter weights.

Sabastion Cuffel, a boys’ assistant, has a jiu-jitsu background. His wife, Jessie Stonebraker, is one of the girl assistant coaches. Short and Cuffel are  ’13 Washburn Rural graduates.

Stonebraker works with runaway youth and can connect well to children who come from difficult backgrounds. Cuffel serves as a volunteer coach for the girls, too.

Parker’s wife, Lindsay, is a second-year assistant coach. While Parker said “a few” teams have women on staff, he really wanted to make sure WR did. Lindsay, a Rural graduate, has been around the sport for many years. Damon called her a “tremendous asset for us.” Lindsay’s parents live close to Washburn Rural, and Damon’s parents are still in Manhattan.

“They didn’t need another (male),” Parker said of his girls’ team. “They needed women. I am a strong believer that our young women need strong, positive female role models.”

Harry LaMar joined Parker’s staff this season as a technique guru. He served as head wrestling for 26 years, most recently at Silver Lake. Chase Prester, who finished third at 152 pounds in 2016 for Russell, is on staff.

“The people I have learned the most from are my assistant coaches,” Parker said. “I have got hands down the best assistant coaching staff in the state. I would put them up against anybody, and they have definitely transformed the way that I have coached in the mat room – which to be honest with you, (they do) majority of the work.”

This week, Parker and his assistants will look to accomplish an extremely rare feat: win both boys’ and girls’ state titles. Washburn Rural boys are ranked No. 1 in Class 6A. WR girls are top-ranked in Division II (Classes 6-5A).

The championships occur at Hartman Arena, the girls Thursday and the boys Saturday. The squads won regional titles. Instead of the normal 16-player bracket and two-day state event, state is eight-player brackets and held over one day because of COVID-19 protocol.

Last winter, Parker wanted to be senior-heavy on the girls’ side. This season, Rural did virtually no recruiting. WR girls had 37 on the roster, which Parker said worked well considering COVID-19 social distancing guidelines. Most Kansas high school wrestling teams still run one, maybe two, practices a night.

The boys go from 3:15-5:15, and the girls from 5:30-7. The two practices also allow girls involved in wrestling and cheerleading to attend cheer practice. Rural set up an after-school study hall, too. Parker has different, highly detailed handbooks for girls and boys.

“This has been the most insane year of my coaching career. I told my wife at the beginning of the year, it was either going to give me a heart attack and kill me or prove that I am invincible, and I can take on anything,” he said with a laugh.

Like all schools, Rural has a cap on the number of people in a room because of social distancing protocol. Rural has its normal wrestling room. Then, the Junior Blues have a dance studio upstairs they converted into a makeshift wrestling room. The varsity and top second-tier boys practice downstairs. At the same time, the younger boys are upstairs.

“I just kind of oversee everything,” Parker said. “I am more of a foreman than hands on the ground kind of guy.”

Rural has pretty much the exact same setup for girls’ practices. This winter, Rural girls qualified eight for the state tournament, the most in Division I. The group has sophomore 109-pounder Kaitlyn Morris (23-9), junior 115-pounder Shayne Miles (28-9), sophomore 120-pounder Addison Broxterman (20-6), 126-pound sophomore Alexis Frederickson (23-12) and senior Ellise Romine (18-11) at 132.

Romine and Morris were varsity wrestlers last winter and missed qualifying for state by one match. Miles was on JV behind a state qualifier. Rural knew she could step into a bigger role. Rural’s key strength comes in the upper weights. This was the final separator that allowed the Junior Blues to beat Great Bend by four points for last year’s title at Salina.

Senior Rebekah Smith is 17-1 at 155. Junior Jaliah Johnson stands 29-5 at 170, and senior Dajia Anderson is 27-4 at 191. Anderson is the defending 235-pound champion. Smith and Johnson were each third at 2020 state. Broxterman, a returning state qualifier, is ranked second at 120. Miles is fourth at 115, and Romine sixth at 120. Smith and Anderson are ranked first, Johnson third.

Wichita North, Emporia, Gardner-Edgerton and Dodge City round out the top-5, respectively. The quartet has combined for 25 state qualifiers. Last year, they had seven combined qualifiers. Only DC had a state placer.

Great Bend junior Bre Ridgeway is 33-0 at 126, and Garden City senior Anjelina Serrano is ranked second at 132. Ridgeway won the title at the unofficial state meet in ’19 and was third last year. Serrano, a significant trailblazer for girls’ wrestling in southwest Kansas, was fourth and fifth the last two seasons.

“We can only control what we can control,” Parker said. “Our opponents have a lot to say about that as well and bracket placements and all that, so we are going to come out swinging.”

In the 6A West Sub-State last Saturday, Rural beat Dodge City, 195-160. They remain first and second, respectively, in the coaches’ rankings. Olathe North, Derby and Olathe South are the next three spots. Rural has 11 state qualifiers, the most among 6A schools.

Mill Valley edged Rural, 161.5-148, for the 6A state championship last winter, the first state wrestling crown in school annals. MV Travis Keal has served as the Jaguars’ coach since the school opened in ’00-01. MV will likely battle Goddard for the 5A crown. Goddard has won six straight state titles. Goddard, Mill Valley, Maize, St. Thomas Aquinas and Ark City are the top-five.

Newton sophomore Nick Treaster (33-1) went 37-1 as a freshman at 106 and won the state title. Arkansas City junior 160-pounder Trig Tennant has won a bevy of top wrestler awards at tournaments. Tennant (33-0) and Aquinas 182-pound senior Jared Simma (34-0) were the 5A sub-state wrestlers of the year. Goddard’s Brett Means and Keal were the 5A sub-state coaches of the year.

In 6A, the WR group is headlined by its returning state champions with 113-pound junior Jacob Tangpricha and 120-pound senior Bishop Murray. They are ranked first and have records of 30-2 and 26-1, respectively. Murray beat Mendez, 5-2, in the finals last winter. Barker is ranked second at 152 behind Derby senior Cason Lindsey. Davis/Lawrence’s Trey Medina and Lindsey were awarded top wrestler at respective sub-states.

Fager is finally healthy after significant injuries the last two winters. As a freshman, Fager was ranked second, and Parker believed he would have won a state title. Fager broke his jaw the week before the regional tournament. Last year, Fager tore his labrum just before regionals.

“He’s had a huge impact on our program, because the first couple years when I didn’t have Duane on staff, I couldn’t have my hands in everything like I do now,” Parker said. “Because I had to work with the big guys at practice, because we didn’t have anybody to work with them, so I wasn’t able to give the attention to everybody in the room that I needed to.”

Last year, Huckstep had a tough state tournament with a pair of close losses. This month, he finished second at Centennial League, won the regional and then took second at sub-state. At league, he lost, 5-3, to Manhattan’s Damian Ilalio, the reigning 6A Defensive Player of the Year and a Kansas State football signing.

“I have seen a fire out of him that I haven’t seen before,” Parker said. “Now, the tricky thing is, heavyweight is probably from top to bottom, the toughest weight class at state this year, so he’s going to have to come out and perform to the top of his ability if he wants to finish what he wants to finish.”