v Covering Rietzke through the years: The road to 800 - Sports in Kansas 
Warning: include(../includes/bodytag.php): failed to open stream: No such file or directory in /home/kansass/public_html/ks/news/index.php on line 36

Covering Rietzke through the years: The road to 800 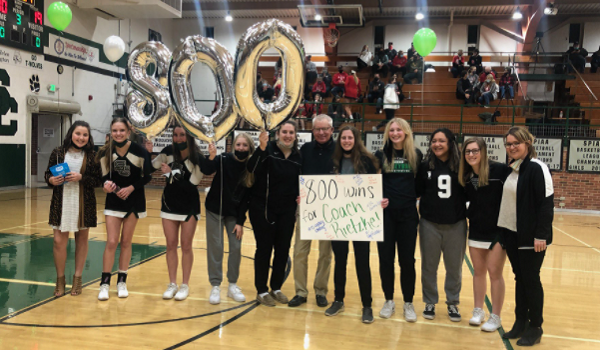 On Feb. 9, Coldwater-South Central girls’ basketball coach Tim Rietzke picked up his 800th career victory with a 41-18 home win against Kinsley. A rancher by profession, Rietzke has coached in the Coldwater school district since 1982.

I’ve covered at least one of Rietzke’s games in each of the last five winters and have talked with numerous coaches and former and current players during the seasons about his program. This year, Rietzke has just eight total players on the roster and stands 14-5.

Once Rietzke reached the milestone, I thought back to the third-place game at the Class 1A state tournament between South Central and Kensington-Thunder Ridge on March 10, 2018 at Gross Memorial Coliseum in Hays. That season, the Timberwolves were the No. 1 seed at state and undefeated. SC reached the final four for the second straight winter.

In the Friday, March 9 semifinals, South Central faced Hanover in the de facto state championship game. SC had foul trouble and lost, 54-46. Less than 24 hours later, South Central defeated Thunder Ridge, 63-29, for a 24-1 season and third place finish. Rietzke and the team were disappointed to not play for the championship. His last final came in 1991.

However, Rietzke kept the day in perspective. Rietzke is a 1969 Kensington graduate. He still has friends and relatives in the Kensington area. Thunder Ridge athletic director Don Wiens sat courtside during the game.

Wiens has been employed by the Kensington school district since 1964. Rietzke worked for Wiens several summers. He said Wiens had “a big influence on my life.” One of the state’s top stories that year was then-Thunder Ridge junior Raegan Boden, the Longhorns’ first player off the bench.

TR wore “Raegan Strong” T-shirts. She fought brain cancer and passed away March 19, 2020. Boden was on the bench during the game and was involved in an emotional postgame medal ceremony. After the game, Rietzke drew a dichotomy between the semifinal loss and Boden.

“All of us in sports admire people who persevere and keep fighting no matter what the circumstances,” Rietzke said. “It’s one thing you try to teach your team even like (Friday), if this is the worst thing that happens to you, then you are going to have a wonderful life. That’s what a lot of today is about is just relationships.”

That SC squad had three seniors, Rylee Alexander, Taylor Bayne and Kassadee Harris. When the T-Wolves ran onto the court just before the third-place game started, Harris nearly started crying. After the game, Alexander, an outstanding volleyball/basketball player, was very emotional.

“It’s just been awesome,” Alexander said. “I’ve loved it. I was like, ‘This is my last season and this is my last game. It’s my last time playing with all my teammates.’ It’s hard.”

Since then, the 5-foot-10 Alexander went first to Pratt Community College and then transferred to Division I University of Idaho, a rare achievement for a 1A Kansas player. Alexander is one of five Vandals to play in all 18 games this winter. Idaho is 12-6.

“We are going to have a hard time replacing their leadership and energy,” Rietzke said at the time. “It’s always tough letting your seniors go, because you spend an enormous amount of time with them, seen a lot of good times, a lot of bad times, a lot of tough times.”

“I don’t know how to explain it, but there’s some bond between player, coach that you can’t find anywhere else, and really that’s kind of what keeps you doing it,” he said.

Rietzke played college basketball at Cloud County Community College and Fort Hays. He and his wife, Marilyn, spent four years at Nemaha Valley. Then, they moved to Comanche County (Coldwater school district) in the spring of 1978 to help Marilyn’s father on the ranch. His brother, Tracy, became an NAIA All-American basketball player at Kansas Wesleyan.

"Coaching was something that I was always interested in," Rietzke said in a Rockhurst release for his induction. "My older brother, Tim, influenced me along with Randy St. Clair.”

Tim Rietzke still remains a rancher and is one of the first-ever Rule 10 coaches. He has two grown children, and his grandson is current Leoti-Wichita County senior Kayde Rietzke, a two-time first team all-state eight-man quarterback. Tim and I have discussed Kayde’s football career, and Tim always has immense pride in his grandson.

He is the only one of those five who has not spent the bulk of his career in teaching/school administration. While Nelson notably has long coached Olpe junior high, Rietzke is the highly rare coach who led Coldwater boys’ and girls’ programs simultaneously. Rietzke did both for 15 years, most recently from 2001-08.

On three occasions, he took over a squad that had won fewer than five games the year prior. Rietzke has greatly enjoyed the rebuilding process – and has continued to win no matter the personnel. In ’17, Rietzke’s and Nelson’s teams faced in the 1A state semifinals.

“We have seen each other around a lot,” Nelson told me at the ’17 state tournament. “His brother used to play some semipro stuff with me after college, so I have known him for a long time. His kids are very well coached. That’s a very talented group.”

One of those talented players was Bri Rutherford. She was on the ’17-19 teams for South Central after she transferred from southeast Kansas. Rutherford cleared 1,000 career points.

Rutherford’s mom, Casey, played for Rietzke and graduated in ‘98. Bri elected to move back to Comanche County to play for Rietzke, which she called a “huge honor.” Rutherford reached out via Twitter to offer her congratulations after Rietzke reached 800.

“He’s much like he is now, except I told Bri, ‘He was more strict back then, but he’s still the same,’” Huck told me in Nov. 2018. “Expects so much and really disciplined. He loves the discipline, and he goes back to the fundamentals. That’s probably my favorite thing about him is he goes all the way back to the basic fundamentals of basketball.”

In ’19, South Central qualified for the state tournament for a third straight season and took a quarterfinal loss. SC went a combined 68-7 from ’17-19 and won the league tournament each time. All three seniors off the ’19 squad signed to play a college sport.

“Part of it is the individuals, but part of it is trying to make practice harder than games,” Rietzke told me after SC won the ’19 league tournament. “They get (upset) when I really bear down, make them work in practice, and they do something like tonight, this is three in a row. They do something like tonight, they forget about it, it all goes away, but at the time it’s happening, you are not very popular.”

In each year, Rietzke believes each player as a role.

“That’s the whole idea of a team, you might not like your role that you have, but you have to fill it, and for the most part, players have accepted that,” he said.

One of the ’19 seniors was Jordyn Jellison, a lanky 6-foot post. Jellison played in 81 career games and tallied 408 rebounds. She often went against bigger girls. Rietzke helped Jellison grow into her role. Jellison currently is a key player for Sterling College volleyball.

“Jordyn is not the strongest post player in the league, but she got a lot of rebounds in traffic for us,” Rietzke said in ’19. “And that’s something we need her to do, and that’s her role on the team.”

Last winter, the T-Wolves had just nine players and had graduated 72 percent of its scoring. For a high percentage of high school teams, that would yield a losing record.

Still, South Central went 16-8, including a third-place finish at the league tournament. Overall, 87 percent of the scoring came from non-seniors. Sophomore Sierra Jellison understood she had to step up and made a huge jump to 16 points a contest. The prevailing notion was that SC overachieved last winter.

“It’s been pretty good,” Lohrding said to me last winter. “We are very fortunate and thankful for Rietzke, because he always works us hard, and he always says that we are young, but that’s not an excuse. Keep working hard.”

This winter, South Central opened 0-2. Abby Robles is the lone senior. She hadn’t played since her freshman year and is a reserve. Lohrding, Jellison, Herd and junior Kirsten Hackney are returning starters. SC was down to just seven players at midseason after a player missed a couple of weeks with sickness.

During the third-place game at the SPIAA league tournament, Rietzke continued his longtime mantras of asking his players to communicate. This season, SC has different personalities, including several laid-back players.

“Probably been a bigger struggle practice-wise than it’s been in the games,” Rietzke told me in January at the league tournament. “And overall, we have had a decent season with the number of players that we have got.”

South Central had a pair of disappointing losses against Bucklin (36-35) and Spearville (48-39) at the league tournament.

“At some point, they have got to learn, and hopefully they do,” Rietzke said after the Spearville loss. “Because if you don’t learn, games like today happen again until you fix it.”

Since then, the T-Wolves have won five straight and permitted just 30 points a contest. SC has wins against Kinsley, South Gray (38-35) and 42-38 versus Bucklin, the SPIAA league tournament champion. Rietzke, one of the few longtime head coaches who is very active on Twitter, thanked his players and assistants on Twitter for the milestone. Two days later, he posted another message.

“Heard from a lot of my ex-players the past couple of days – means more to me than the number,” he said.