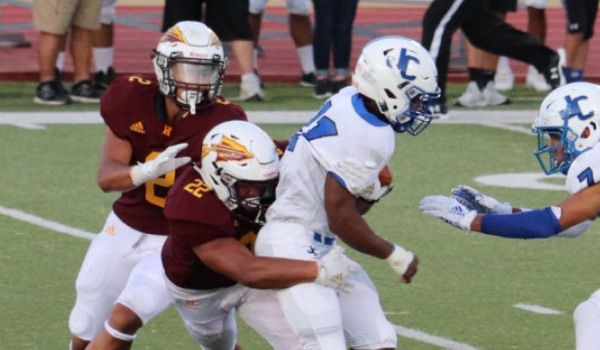 The 6-foot, 190-pound McCarty posted a 4.0 GPA, 4.56 seconds in the 40-yard dash and 4.18 seconds in the pro agility. McCarty and many others did not have an opportunity for on-campus camps because of the COVID-19 pandemic.

In the fall, Cheylin lost a marquee matchup with Colorado power Stratton/Liberty because of coronavirus concerns. Colorado started its season late, and Stratton/Liberty earned state runner-up for the second straight fall.

McCarty, who picked up several more NAIA offers, delivered another brilliant season and helped the Cougars finish 9-0 with its first athletic title in any sport. By all public records, McCarty holds the national six-man career mark for total offense per game with 307.9 yards. McCarty did virtually all he could in the opportunities provided.

He believed McCarty would still likely go the NAIA route.

Walden believed, that while the NAIA was a fine option, many players would slot lower this season compared to past years because of COVID. Along with no camps, current college players did not have to burn a year of eligibility in ’20-21 because of the pandemic. That caused unsettled roster management at many schools.

On Jan. 5, McCarty committed to Bethel as an Athlete.

“We are going to miss out on a lot of good kids this year that should be coming to D1s and D2s that we just don’t have spots for,” Walden said. “And I kind of feel like that’s what(‘s happening) with Colton. I think he’s talented and has the ability and work ethic to play at probably any level of college football, but unfortunately there’s just not a spot for him on some teams.”

Walden’s theory proved correct for other athletes in all classifications across Kansas. Wednesday marked National Signing Day. KPreps has long produced its annual Signing Day list. This year, 254 athletes signed with 62 schools, according to KPreps data as of Thursday night. Even with COVID, the overall number was slightly higher than last year.

Bethel has made great strides with third-year coach Terry Harrison, formerly at Wichita Heights. The Threshers’ triple option led NAIA in rushing yards in ’19 and an 8-3 record.

Bethel was ranked for the first time since ’08. Defensive coordinator Paul Kempf, who first offered McCarty, and Director of Scouting’s Ben Mitchum have been among Bethel’s coaches who have done a great job of recruiting Kansans. Bethel went 8-0 in the fall and has two key games in the spring.

This season, Bethel inked 14 Kansans, per KPreps. That was a plus-4 improvement from 2020 National Signing Day.

All 14 Bethel players went to schools Class 3A or smaller, including half-dozen from six/eight-man ranks. Class 3A Halstead has three headed to Bethel. The Threshers tallied eight Kansans in ’19 and ’18 apiece after six combined in the four years previous.

Compared to 2020, the schools that had the biggest downward changes with signing Kansans were high academic eastern schools and FBS programs. In nearly all cases, those schools did not have a fall season nor allowed recruits on campus.

Twenty-two schools combined for 27 recruits in 2020. None of those 22 had a Kansas player this year. Those schools included Lafayette, Bucknell, Harvard, and Princeton from the east, and and FBS’ Stanford, Akron, Illinois, Iowa State, Minnesota, Oklahoma State and Nebraska. FCS Valparaiso offered multiple Kansans, though none signed. South Dakota and South Dakota State have made Kansas a focus. They picked up four recruits last season and one this year.

Kansas had four signees, and Lawrence’s Devin Neal, the state’s top recruit, was the lone scholarship. Neal is the second-highest rated recruit in coach Les Miles’ 2021 class, per 24/7 sports, a recruiting leader. Kansas moved from No. 56 to No. 51 in the national recruiting rankings.

In particular, Cash, Miller, Ngo and Shields all had at least a FCS or Division II offer. Nuzum was offered by FBS Akron. Major credit to Hutchinson’s new staff of head coach Drew Dallas and assistants Tate Omli and Kody Cook. All three have been together onstaff for the last year and have significant Kansas ties.

On Friday morning, Dallas reported to SIK that Hutchinson CC had 27 Kansas signees and looks to add a few more in the coming days.

Dodge City’s Ricky Coon took over as head coach in 2019. Coon, a graduate of Wichita South and Bethel, has helped the Conqs re-establish in Kansas. In particular, Dodge picked up Inman’s Carter Brown and Wheatland-Grinnell’s Trevor Zarybnicky, the 1A and Eight-Man, Division II Defensive Player of the Years, respectively.

The 6-foot-3, 235-pound Zarybnicky had some MIAA interest along with significant NAIA interest with Ottawa and Bethel offers. He was considered a possible Division I player with more summer opportunities. Like McCarty, Zarybnicky performed at an elite level in the fall. DC’s coaching staff made a strong impression on Zarybnicky.

There were five schools, including FBS Air Force and FCS Missouri State, that were plus-3. Both AFA and Missouri State had zero Kansas signings in 2020.

Jones and Ross were offered at the FCS level, Stuhlsatz collected Division II level, and Martin cleared 500 career tackles and was the 4A Defensive Player of the Year.

NAIAs Benedictine, Baker and Friends, along with Division II Pittsburg State and Garden City Community College, were among those that dropped between two and five from last year’s total.

Air Force had all elite names: Shawnee Mission Northwest quarterback Ty Black, Norton offensive lineman Christien Hawks and St. James Academy’s running back/athlete LaJames White. Black committed to AFA in the summer and was widely considered an underrated recruit. Hawks liked Air Force in the summer, then committed to KU before he changed to the Falcons.

Daher is well-spoken with high grades and an entrepreneur (@ksneakerhouse) with a successful shoe business. He had offers from Eastern Michigan, Akron and Ivy League’s Brown, among others. Daher committed Oct. 13 to Army West Point. He is ranked as Kansas’ No. 10 best recruit. Bishop Carroll offensive lineman Ben Purvis, a Shrine Bowler, committed to Navy.

“I am just so proud that with all the offers that he had to be able to single out to serve our country, to worry about his education and where it was going to lead him 40 years down the road,” Northwest coach Steve Martin told SIK in late November. “Man it just makes you feel like you are doing the right thing as a coach.”

Martin has led the Grizzlies to three straight 5A state runner-ups. Martin has never been to an Army-Navy game and is so excited to attend one to see Daher play. Daher wants to study engineering.

“Kept his eyes on the academies and the Ivy Leagues," Martin said. "He knows that college football is a tool for him to get a great education and man, I am telling you, when he told me he was going to Army, man, I was so excited.”

Coach Chris Brown is Fort Hays’ all-time winningest coach and has led the Tigers to a pair of MIAA championships. FHSU is well-known for getting the best players in western Kansas. Fort Hays again picked up many of the top in its area including Norton’s Jonah Ruder and linebacker Gavin Sproul. Ruder, a wide receiver, had multiple Division II offers. Both Ruder and Sproul have strong family/cousin ties to Fort Hays football. Plus, Dodge City’s Alden Knedler had an offer from Division I St. Thomas.

Goddard’s Kyler Semrad, Derby’s Jack Hileman, Goodland’s Leyton Cure, and Lawrence’s Porter Dannevik were among key recruits. Cure, a quarterback, is expected to transition to tight end. Both of Semrad’s parents went to Fort Hays. Derby has set several players to Fort Hays in the last few years, and linebacker Jose Delgado was an All-American. Even with smaller and shorter visits, masks and social distancing, Fort Hays signed 18 Kansan players for the second straight year.

FHSU signed 30 high schoolers overall and especially targeted the line. Because of no ’20 season, Brown said the money is going to be less probably for the next four years, though Fort Hays doesn’t normally give big freshman scholarships.

“West of Salina needs to kind of be our home ground and our home base,” Brown told reporters in his Signing Day press conference.

Both are undersized. Kremer stands 6-foot, 265. Young is 5-6, 185 and ranked eighth among all Kansans for all positions and the No. 83 running back in the country. Of the nation’s top-194 running backs the last two years, Young was the shortest, per 247. Kremer, known for his academics, signed with Colorado School of Mines. Young committed Feb. 1 to Northwest Missouri State.

While not part of the 2021 Signing Day class, two Kansans were key transfers. Norton quarterback Jace Ruder went to North Carolina the last three years. He graduated in December and has four seasons of eligibility. Ruder announced his transfer to FBS North Texas earlier this week.