v Craw-Kan Team of the Week: Uniontown Girls BB - Sports in Kansas 
Warning: include(../includes/bodytag.php): failed to open stream: No such file or directory in /home/kansass/public_html/ks/news/index.php on line 36 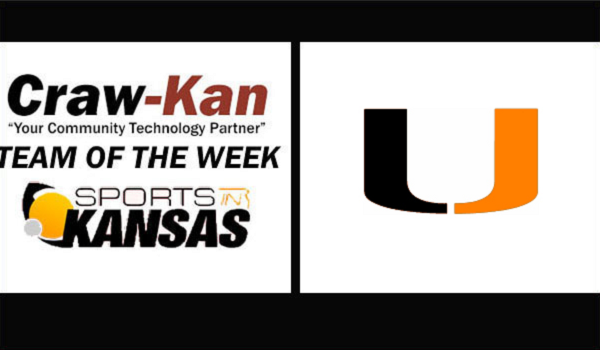 Uniontown has enjoyed many rare moments this winter: a player exceeding 1,000 career points, a top-10 ranking from the Kansas Basketball Coaches Association, a midseason tournament title and multiple big victories against familiar opponents such as Humboldt and Jayhawk-Linn.

The highlights have yielded an 11-1 record and No. 9 ranking this week. Uniontown bumped into the rankings for the first time this winter. The Eagles have won 10 straight after a 32-29 overtime loss to Erie on Dec. 10.

Uniontown is part of a relatively wide-open classification. Last season, Uniontown went 16-6 and lost to Pittsburg St. Mary’s-Colgan in sub-state. Five squads had separated themselves in the 2A pack: undefeated Spearville, Sterling, Garden Plain, Valley Heights and one-loss WaKeeney-Trego. Spearville beat Colgan in the state quarterfinals.

While all five of those squads remain ranked this winter, no 2A team is undefeated. Sterling was the only one of those five to reach the finals of its midseason tournament, though took a 21-point loss to 3A unbeaten Hugoton. Notably Spearville has overcome multiple injuries, including three ACLs. Uniontown, under veteran coach Dustin Miller, returned 67 percent of its minutes and 87 percent of its scoring from last winter.

On Jan. 26, Uniontown defeated Jayhawk-Linn, 55-36. That produced Uniontown’s largest win versus Jayhawk-Linn since before 2007. Howard tallied 22 points, six assists and three steals. Schoenberger tacked on 19 points and five rebounds. Hampton finished with 10 points, five rebounds and four steals. The Eagles had been 8-16 in the last 24 meetings in the series.

The Eagles beat Kansas City Christian (54-28), then Altoona-Midway (59-27) followed by a win versus Prairie View (65-25). While Uniontown does not frequently play KCC or PV, it marked the first win versus KCC in at least 15 years. Uniontown defeated PV for the first time since 2010.

At the tournament, Howard averaged 19.7 points, 6.7 assists, 6.3 steals, 4.7 rebounds and a pair of blocks per game. Schoenberger delivered 19 points and 7.3 rebounds. Both players earned all-tournament team honors and team varsity players of the week. Schoenberger reached 1,000 career points. She became the third player in Uniontown history to clear 1,000 career points. Howard, who has earned 2nd team all-state honors from Sports in Kansas last season, is averaging nearly 19 points per game this season and is a standout multiple sport athlete as an all-state track and field athlete the last track season we had in Kansas in 2019 as a freshman. She's also a member of the highly talented and regarded Wheat State Elite Program in Kansas.

Last week, Uniontown’s varsity player of the week was Hampton. She averaged 11 points, 4.5 rebounds, 2.5 steals and two assists a contest. She held Chetopa’s leading scorer to zero points in a 62-21 victory on Jan. 29.