v American Implement Team of the Week: Spearville Girls BB - Sports in Kansas 
Warning: include(../includes/bodytag.php): failed to open stream: No such file or directory in /home/kansass/public_html/ks/news/index.php on line 36 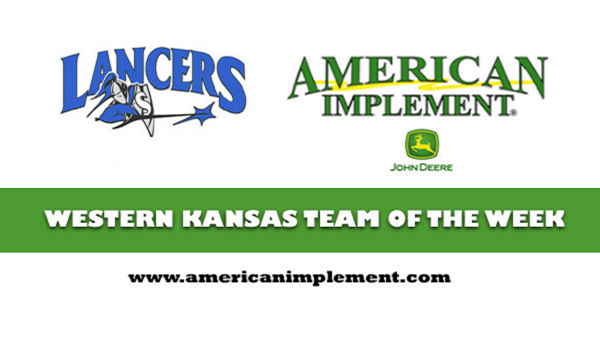 DODGE CITY – Spearville girls’ basketball coach Todd Cossman immediately let out exuberance after the Lancers defeated Coldwater-South Central, 48-39, in the third-place game of the Southern Plains Iroquois tournament Saturday. Cossman then gathered his team on the United Wireless Arena and repeated multiple times, “I am so proud of you guys."

Spearville’s performance, against an experienced South Central squad, came with four players out with injuries, including three ACLs. Remarkably, the Lancers, led by Cossman’s continually upbeat personality along with their waves of depth and defense, stand at 11-2. Spearville is currently ranked fifth in 2A by the Kansas Basketball Coaches Association.

“I am so proud of getting to coach all the players that are on this team,” Cossman said. “I have got the kids who are injured just cheering our kids out on the court on as hard as they can. I’ve got kids having to play in new roles, and we have just got kids that are just stepping up.”

Last winter, Spearville finished 24-0 as 2A’s top team. The Lancers were part of the Forever Four. Andrew Kempke earned 2A Coach of the Year, and Ehlaina Hartman collected 2A Player of the Year.

Hartman, also the 2A volleyball player of the year, is now in the starting lineup and delivers 11.8 points per game for 10-3 Emporia State basketball. The Lancers joined Central Plains, Olpe, Nemaha Central, Liberal and Topeka as girls’ squads that posted an undefeated mark in ’19-20.

Cossman, who has coached more than 10 years, notably took over the Hoxie program the winter after the Indians’ then-state record 107-game winning streak ended in '15-16. He was in Dodge City last year. Cossman was aware of Spearville’s basketball tradition. In the summer, Cossman has long coached with Western Kansas Elite, an AAU program that features Emmanuel Adigun, current head coach of the undefeated 3A Hugoton girls.

“It was almost like a dream job,” he said. “They have a community that cares and is passionate about their athletics.”

This winter, Spearville opened second in 2A behind Sterling. The Lancers won its first eight games and bumped its winning streak to 32. Only Topeka, NC and Olpe have posted longer current runs. However, the last two victories in the streak yielded injuries. On Jan. 12, Spearville beat Ness City, 60-39. Early in the second quarter, senior Alissa Heskamp landed awkwardly and tore her ACL.

“Everything we do defensively is predicated on the fact that she cleans up any mistakes we make,” Cossman said. “We funnel stuff towards her. She blocks shots. She rebounds. She does so much for us.”

Since Heskamp went down, the 6-foot Stein has delivered games of 24 and 25 points. Before then, her career high was 14.

“Alissa is probably, if not the best player in 2A, one of the best players in 2A,” Cossman said. “When she went down, Anna really stepped up into a new role. …We don’t have any pressure.

“There’s a lot of people that are going to assume ‘Well, they’ve lost a lot. They can’t do this,’” he added. “I know what our potential is. I know what we can be.”

In the SPIAA tournament semifinals last Thursday, Spearville fell, 48-43, to a strong Hodgeman County squad that has lost just once since Christmas.

Sophomore Kristen Huston hurt her knee on a drive. In the final seconds, senior Addia Nau suffered a shoulder injury. Nau was the team’s second-leading scorer and rebounder with 10.7 points and 7.4 rebounds and paced with three blocks a contest. Cossman said Nau might come back before year’s end. She and Heskamp are the team’s lone seniors.

Spearville bounced back to beat a quality T-Wolves team by nine. SC coach Tim Rietzke has won more than 750 games with the program. This season, the T-Wolves have eight total players, though just seven dressed against Spearville. SC (10-5) plays zero seniors in the starting lineup, though returns four starters.

“Spearville played in a manner that the body language showed me that maybe the third-place game meant more to them with all their people hurt than it did to my team,” Rietzke said.

Spearville will host its sub-state this winter. The Lancers are part of an eight-team sub-state where five squads are 8-5 or better. Sterling and Elkhart are both 12-1, according to KSHSAA. Spearville stands at 11-2 after Tuesday’s 48-26 win versus Satanta. Stein delivered 25 points on 11 of 19 shooting.

“We can make a lot of noise in sub-state,” Cossman said. “There’s no team – there’s no team – that we can’t play with. I absolutely believe that. We are as good a defensive team as there is. Like we get after it on the defensive side, and so our defense is our bread and butter. That’s what’s going to keep us in games. We are sometimes going to go up and down on the offensive side, but if we just play defensively like I know we can, we can be in any game we play.”

Kuker, a sophomore, is up to 7.2 points and 2.6 rebounds. She made eight treys and tallied 24 points against South Central. Kuker has four double-figure performances. All have come in the last six contests. On the shooting gun, Kuker generally makes 50 to 60 percent of her treys. She is 26 of 52 (50 percent) from long range this winter.

Cossman labeled Kuker one of the best shooters he has ever coached. Kuker is tied for second in Kansas in 3-point field goal percentage with Salina Central junior Aubrie Kierscht, a Navy commit. Among Kansas players with more than 16 made 3s, Kuker and Kierscht are the only ones above 42 percent, according to MaxPreps.

Ratzlaff, a junior, has put together a solid year and especially played strong defensively against South Central. She, Kuker and Stein are the lone Lancers to appear in all 13 contests. Brakey has been in 10 games. Nolte has 10 all-time varsity points, all in the last two games. Versus SC, she scored eight and delivered two huge defensive stops.

Sophomore Taegan Pedigo, a key player as a freshman, missed two games in December with a meniscus injury. She has played well with three points, 5.2 assists, 4.6 rebounds and 2.9 steals per game.

“I have just been really appreciative of the effort and the heart and the intensity this team has displayed this season,” Cossman said.