v Basketball in KS: Notes headlined by Olpe, Cheney, Hays - Sports in Kansas 
Warning: include(../includes/bodytag.php): failed to open stream: No such file or directory in /home/kansass/public_html/ks/news/index.php on line 36

Cheney won the Haven tourney for first time since 2011. 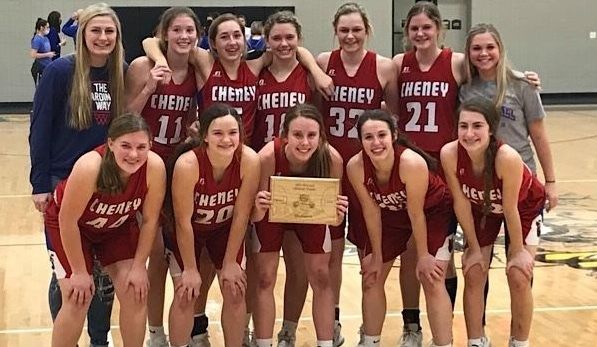 Plus, a quick look at several huge matchups this week, notably Western Athletic Conference ranked rivals Garden City at Dodge City on Tuesday, and the key game Friday between Andover Central and Salina Central girls. AC is first in 5A, Salina Central fifth in 5A. They rank first and second in 5A offense.

The Lyon County tournament is one of the longest basketball tournaments in the country.

Olpe, ranked No. 1 in Class 1A, Division I, continued to establish itself as the clear favorite in its classification. The Eagles led Lebo, 32-13, at halftime and defeated Lebo, 58-31. Olpe captured its fourth straight league title under coach Jesse Nelson, the all-time winningest coach with more than 930 career victories. Lebo is ranked tenth in 1A, Division I.

As usual, the tournament was played at Emporia State University. Olpe senior Macy Smith, an ESU signee and returning first team all-state player, paced the Eagles with 16 points. Olpe improved to 15-0, according to KSHSAA results, and has won every game by at least 20 points. Very likely Olpe’s only test will come from Osage City (11-1) on Feb. 12. Olpe finished 26-0 last winter and has captured 41 straight games.

Olpe, Central Plains, Topeka High, Liberal and Nemaha Central all went undefeated last winter and were Forever Four squads. Central Plains and Liberal have suffered losses this season. Topeka High has won 34 in a row and stands at 11-0 this winter. Nemaha Central captured the Wellsville tournament this weekend, improved to 13-0 and won 37 in a row. Andover Central, ranked No. 1 in 5A, lost the second game of last winter. The Jaguars have earned 32 straight victories.

Kansas’ only coach with more wins than Bishop Miege’s Terry English is Nelson. English is 21-6 all-time in state championship games and has made 37 state tournament appearances, according to Kansas historian Carol Swenson. English, who has coached at Miege since 1977, entered the ’19-20 season with an 866-165 record, according to Swenson. Last season, Miege finished 21-2 and bumped his record to 887-167. The Stags stand at 11-1 entering Monday.

Miege took a 65-60 loss to Shawnee Mission Northwest on Jan. 27, and then beat Blue Valley North, 67-41, on Jan. 29. English stands at 898-168. This week, Miege will be favored against Blue Valley Southwest at home on Tuesday, and then for possible win No. 900 on Friday at Blue Valley West.

Miege is first in 4A, and Northwest is second in 6A behind Topeka.

In a contest that gained statewide attention, Cheney girls beat Halstead, 57-47, to win the 48th annual Wildcat Classic tournament championship Saturday in Haven. Cheney led 12-9 after the first quarter, and 22-21 at halftime. Cheney was up by three points after three quarters, and the Cardinals outscored Halstead, 16-9, in the fourth. Cheney is ranked No. 1 in Class 3A, and Halstead second in 3A.

There has been a groundswell of support to change the geographic sub-states this winter that were created because of coronavirus concerns. Cheney and Halstead, located just under 30 miles away, have a chance to meet in the state quarterfinals – rather than later in the state tournament. Cheney stands at 12-0 and have won 23 straight contests dating back to last year. Both Cheney and Halstead were 3A Forever Four teams. Cheney won the Haven tournament for the first time since 2011.

Additionally, large classifications were seeded in the past few years. This season, the 5A boys has two undefeated teams: Hays High and Salina South. Both are in the same four-team sub-state because of geographical reasons rather than seeding. The 6A Dodge City girls sub-state has Dodge City, Garden City and Liberal, teams with a combined three losses to Kansas squads. Several other sub-states are very top-heavy, too.

Brynn McCormick, a first-year transfer from Scott City and one of the state’s top juniors, earned Cheney’s player of the game with 20 points on 6 of 10 shooting. Senior Kylee Scheer, the two-time 3A Player of the Year, delivered 19 points. Scheer has signed with Emporia State, and Halstead’s Karenna Gerber has signed with Pittsburg State. Gerber recently had a 40-point performance. Cheney is an excellent 3-point shooting team and went 5 of 13 from long range, including 3 of 5 from McCormick. Scheer finished 10 of 12 from the free throw line.

Halstead is 11-1 and had its 20-game winning streak end. In the semifinals, Halstead defeated Garden Plain, 56-48, earlier in the tournament. GP has finished state champion, state champion and Forever Four the last three seasons. Garden Plain is 9-3 with losses to Cheney, Halstead and Andale, 31-29, on Saturday in the third place game. Halstead is 1-4 against Cheney since 2010, including a 45-43 win on Feb. 1, 2020 – that marks the Cardinals’ last loss. Garden Plain is second in 2A.

Cheney continues to play without standout point guard Lexi Cline, who has been out all year with an injury. Still, Cheney has put up great numbers with 1.07 points per possession, turnovers on just 17.8 percent of possessions and collecting 37 percent of offensive rebounds. Scheer delivered 23.9 points, five rebounds and 3.7 steals a game last winter. This year, she is at 24.5 points, 5.8 rebounds and 3.9 steals. McCormick has 10.3 points and 5.1 rebounds. Junior Brooklyn Wewe has enjoyed a strong year with 7.5 points, 3.9 rebounds and a team-high 4.3 steals a contest.

Perhaps the top story in basketball this winter, Dodge City girls opened 11-0 for its best start since the ‘20s. DC won at McPherson, 58-41, on Dec. 18. On Saturday, McPherson beat Dodge City, 44-39, in the rematch to win the McPherson Invitational. McPherson held the Red Demons to their season low in points. McPherson is 10-2 and ranked fourth in 4A. Dodge City is fourth in 6A.

McPherson led 33-32 after three quarters and held on late. McPherson held Dodge City to 31 percent shooting. Lauren Labertew paced McPherson with 15 points, and Kassidy Beam tallied 13 points. McPherson went 13 of 15 from the foul line, and Dodge City was 2 of 2.

Garden City girls has quietly built an impressive resume after it did not play in December because of COVID-19 concerns. GC is 8-1, though has not lost to a Kansas team and won the Colby Orange and Black tournament. Garden City is predominantly led by seniors and sophomores. The two sophomores are Aileen Becerril and Amaya Gallegos. Seven seniors are on the roster, including 5-foot-10 Julie Calzonetti. On Tuesday, Garden City plays host to Dodge City, with the rematch scheduled for Feb. 16.

The Top Gun tournament had a quality field that featured a pair of undefeated teams with 3A Nemaha Central, 5A Lansing, and consistently solid programs with Jefferson West, Lansing, Baldwin and Topeka Hayden. Nemaha Central gave Lansing its first loss earlier in the week, and then defeated Louisburg, 52-48, in the championship. Jeff West beat Lansing, 40-34, for third. Baldwin defeated Topeka Hayden, 62-52, for fifth.

Nemaha Central is ranked third in 3A, Lansing is third in 3A, and Louisburg stands fifth in 4A. NC has captured back-to-back championships in a tournament that has  existed since 1991. NC is 13-0.

Bucklin girls captured its first-ever Southern Plains Iroquois tournament championship with a 44-36 win against Hodgeman County on Saturday at United Wireless Arena. The Red Aces were seeded second but are not ranked. However, both injury-plagued Spearville and South Gray, each ranked, both lost to Hodgeman County. Bucklin has improved its defense and steal rate from last winter.

Hays High boys won a remarkable 47-46 comeback versus Salina Central at home on Friday. HHS trailed by 19 at halftime and won when junior guard Carson Kieffer scored a right-side layup with his left hand as time expired. Hays High has won 21 straight contests and is ranked No. 1 in Class 5A. HHS is 13-0. Salina South is 10-0 and ranked second in 5A. Hays High, South and Central are all in the same four-team sub-state. Salina Central has played ranked teams Haysville Campus, Salina South, Hays High and Andover all to seven points or fewer.

Salina Central girls, ranked No. 5 in 5A, improved to 10-2 after a 64-43 road win versus Hays High. SC received 28 points from standout junior Aubrie Kierscht and a huge defensive game from sophomore point guard Mykayla Cunningham. She had seven steals and two other forced turnovers. Central lost, 60-52, to Andover Central on Dec. 17.

Andover Central is 11-0 with incredible offensive efficiency at 1.18 points per game and turnovers on just 15.9 percent of possessions. AC averages 67 points a game and SC has 59 points a contest. They have been ranked 1-2 among 5A teams that have played more than one game entering last Friday. Junior Brittany Harshaw has scored 20.4 points a game, and senior Bailey Wilborn has 12.9 points a contest. Harshaw has committed to Creighton, and Wilborn to Maine. Wilborn recently cleared 1,000 career points. Wilborn is 35 of 83 on 3-pointers (42 percent), all team-leading statistics.

Hoxie is No. 1 in Class 2A and is the only undefeated team in the classification. The Indians are the 2A favorites and continued to roll with two big wins on Friday and Saturday. Hoxie beat Quinter, 61-27, on Friday and 58-42 against Colby on Saturday. Quinter boys are 10-3, and Colby boys stand at 6-7, though finished second at its Orange and Black Classic two weeks ago.

Maize South improved to 8-4 and won its seventh straight contest with a 42-36 win versus Circle, ranked eighth in 4A.

Hugoton sophomore Mikyn Hamlin, with an offer from Division I Abilene Christian, continued her big season with 31 points. Hugoton is ranked fourth in 3A behind Cheney, Halstead and Nemaha Central. Hugoton stands at 11-0.

In Mid-Continent League play Friday, Phillipsburg girls outscored Smith Center, 25-8, in the third quarter and won 65-41. Phillipsburg, ranked sixth in 3A, improved to 12-1. Smith Center is eighth in 2A after it won the MCL midseason tournament.

Kori Babcock went over 1,000 career points for Chanute. Babock was a 4A all-state selection on the girls from Sports in Kansas last season.

Andover Central senior and Maine signee Bailey Wilborn went over 1,000 career points. AC is loaded with talent and the #1 team in 5A.

Walker Adams of Pleasant Ridge had a school record nine threes in a game last week on his way to 37 points.

Sara McWilliams of Waverly of Girard went over 1,000 points in the first round of the Lyon County League Tournament.

Brady Frickey of Ellis went over 1,000 career points. Frickey is averaging over 18 ppg since the Holiday Break.

Chetopa senior Brali Conard went over 1,000 career points for the Green Hornets becoming the first player in school history on the girls side to do so.