v Wrestling in KS: A look at big weekend matchups, results - Sports in Kansas 
Warning: include(../includes/bodytag.php): failed to open stream: No such file or directory in /home/kansass/public_html/ks/news/index.php on line 36

Wrestling in KS: A look at big weekend matchups, results 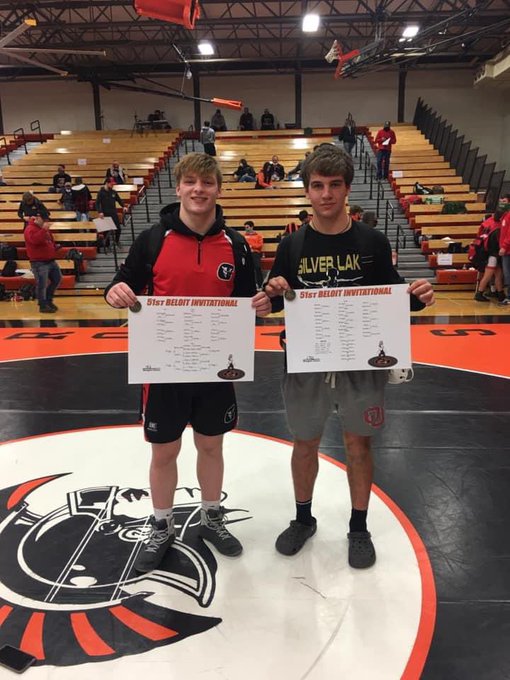 Mill Valley senior Ethan Kremer was regarded as likely the state’s best football player in the fall. The two-way lineman led MV to back-to-back state championships and has signed with Colorado School of Mines. He is the two-time 5A Defensive Player of the Year. Kremer is also a two-time defending state wrestling champion and helped the Jaguars to a state wrestling title last winter. Kremer is ranked first for all Kansas classes, and is No. 17 nationally.

This weekend, Lawrence Free State’s Tai Newhouse won by fall against Kremer in the second period of the Tonganoxie Quad. As of the Jan. 12 rankings, Newhouse was ranked fifth in 6A at 285, and Kremer first in 5A at 285.

Newhouse took a 5-0 lead near the end of the first period and pinned Kremer in the second period. Newhouse is an impressive junior defensive tackle. He tried high school wrestling for the first time this winter and stands at 10-0 with nine wins by fall. Newhouse is listed at 6-foot-3, 285 pounds. FS was one of Kansas’ teams most affected by COVID-19 in 2020. FS finished 0-6. Newhouse posted 57 total tackles and six tackles for loss in six games. He can bench 305 and squat 535.

Kremer was 8-0 after the Olathe North Showcase on Jan. 16. Mill Valley took third in the six-team tournament that featured Kansas and Missouri schools. Kremer finished 28-2, including 4-0 at state last winter.

In the team standings, Free State came into the rankings at seventh in Class 6A on Dec. 31 and was seventh against on Jan. 12. Mill Valley is ranked second in 5A behind Goddard.

In most years, the Bob Kuhn Senior Prairie Classic draws 15-plus teams and is contested over two days. However, like many tournaments, Bob Kuhn was moved to one day with far fewer teams because of coronavirus concerns.

For Great Bend, 106-pounder Kaden Spragis (25-1) captured the championship with a bye, a tech fall and a championship win by fall. Spragis is ranked second in 5A.

In a key 170-pound match, Goddard-Eisenhower’s Mason Levin lost in the semifinals to Kapaun Mt. Carmel’s Nathan Fury. Levin took third and is 9-1. Fury is ranked third in 5A, Levin sixth.

Additionally, Braedyn Blasi was second at 120, and Chance Holmgren finished third at 138. Israel Garza was also third at 145, and Dakota Cook took third at 160. Noah Packard was fourth at 195, and Derek Yuza took second at 285.

Hays High recorded championships from Dalton Dale (9-3) at 152, and Gavin Meyers (12-0) at 220. Meyers dominated his four matches with falls in 59 seconds, 49 seconds, 1:19 and 43 seconds. Meyers was the tournament’s most dominant wrestler. He was the only one to achieve four pins. Dale, Goodland’s D.J. Knox, GB’s Schroeder and Weber, Salina Central’s Slade Adam and Eisenhower’s Dakota Cook were those with three pins. Knox is ranked third at 113.

Hoisington, Phillipsburg and Southeast of Saline were the smallest classification teams at the tournament. The 3-2-1A’s top wrestlers all fared well. Notably, for Hoisington, Joshua Ball (20-0) won the title at 182. The No. 1-ranked wrestler in 3-2-1A, he had a bye and then a pair of wins by fall.

Southeast of Saline’s Matthew Rodriguez was the lone participant for the Trojans. He lost his first match en route to a second place showing at 170 and stands at 14-1. Rodriguez lost, 2-1, to Fury in the finals. Fury is 23-1. Rodriguez is ranked first in 3-2-1A.

Knox suffered his first loss this winter and is 21-1 at 113. Knox, a defending state runner-up, lost to Josiah Ball in the semifinals in a fall in 3:53. Knox came back to take third.

The eight-team Cimarron tournament had a boys’ and girls’ division and featured several of the state’s top girl wrestlers. Pratt is No. 1-ranked in girls’ Division II, which is Classes 1-4A. Last year, Pratt qualified two for the inaugural girls’ state meet with Livia Swift and Jadyn Thompson. Swift won the state title with a 33-3 record, Thompson took fifth at 30-8, and the Greenbacks tied for fourth in the all-classification meet.

In the overall team standings, Wichita County won with 127.5 points. Cimarron took second at 119.5. Lakin was third at 96.

In the 101/109 girls, Lakin’s Josiah Ortiz stayed undefeated at 17-0. She defeated Pratt’s Lilly Herman (15-10) by fall in 48 seconds. That marked Herman’s only tournament loss to a non-teammate.

Jadyn Thompson (22-0) stayed perfect with another title at 113. Thompson won her two matches by 7-0 and 2-0 scores. Thompson is ranked second.

The Rock Creek tournament featured many of the state’s top teams. Washburn Rural and Great Bend finished first and second, respectively, at the state meet last winter. This season, WR and GB have been ranked first and second in Division I, the larger of the two classifications. Baldwin has been ranked first or second in Division II and is currently second behind Pratt.

Rural won the tournament with 138 points, Baldwin second at 95, and Great Bend third with 92.5. Bonner Springs took fourth at 57.5 in the 12-team tournament.

Morris went 2-0 with a pair of wins by fall. Hall had a win by forfeit and an 8-6 decision. Johnson finished 5-0, including four wins by fall and an injury default victory. Johnson took third at state with a 23-6 mark last winter. The big win came in the championship with a victory in 1:42 against Baldwin’s Hayleigh Wempe. A freshman, Wempe is ranked first in Division II at 170.

Anderson, a defending state champion, won both of her matches in eight-second pins.

Baldwin’s Emma Grossoehme has committed to NAIA Baker University for volleyball and wrestling. Baker, also located in Baldwin City, has done an excellent job with signing top Kansas girl wrestlers the last several years. Grossoehme has been one of the trailblazers for Kansas girl wrestling. As a junior, she recorded the first win for a Baldwin girl wrestler with a pin against Olathe Northwest. She went 24-8, 2-2 at state last season as one of Baldwin’s two state qualifiers.

As well, Audrey Darnell took second at 138. She lost to Holton sophomore Gracie Gallagher in 2:32. Wempe was 4-1 for a second place finish at 170.

Grossoehme and Darnell are both ranked fifth in Division II. Gallagher is ranked fourth. Brianna Mitchell took third. Earlier this season, Grossoehme, Mitchell, Darnell and Flory all earned Wrestler of the Week honors for their workouts during winter break.

Very close finish at 101 between pair of No. 1-ranked wrestlers

The 101-pound final featured two No. 1 wrestlers with Great Bend’s Breckyn Elliott and Oakley’s Citori Bosserman. In the first-place match, Bosserman bested Elliott, 3-3, in the ultimate tiebreaker. A sophomore, Bosserman is ranked first at 101 in Division II, and Elliott is first in Division I.

In the championship, Deines won by fall in 2:40 against Washburn Rural’s Ellise Romine. Ridgeway and Deines were the tournament’s top wrestlers – they were the lone ones to record five wins by fall. Ridgeway had a total pin time of 4:50, and Deines in 7:45.

A freshman, Gomez is sixth at 120. Ridgeway has been one of the state’s best wrestlers the last three years and is ranked first at 126. Deines is ranked fourth at 132.

Like the Bob Kuhn, the Beloit tournament generally draws teams from all over the state but went more geographic proximity this season because of COVID-19. The tournament was split into two days.

Bell improved to 30-0, Bretz 29-1 and Johnson 27-0. In the 138-pound final, Bretz defeated Silver Lake’s Kai Allen, 4-2. Allen is a former state champion and ranked first at 138. Bretz is ranked third. Drew Bell and Johnson are both ranked first.

Silver Lake Daigan Kruger (33-1) captured the crown at 170, and Concordia senior Hunter Schroeder is 21-1 and won the title at 182. The two have wrestled against each other for many years. They have long remained friends, according to a social media post from Steve Schroeder, Hunter’s father. Steve Schroeder is the longtime Cloud County Community College athletic trainer.

At 106, Hill City’s standout Carter Underhill suffered an injury default loss in the finals to Colby’s Kaeden McCarty. Underhill finished 4-1 at the tournament, 20-2 overall. Underhill is ranked third in 3-2-1A.

Standout freshman Aiden Amrein (20-1) captured the 152-pound title. He had a bye, and then won the other four matches by fall, all in 2:35 or less.

Prochaska is a defending state champion and ranked fifth at 170.

Basehor-Linwood defeated Holton, 45-33, in a dual Friday. Sophomore 126-pounder Alex Smith-Mendez earned the team’s Most Outstanding Wrestler. It marked the 100th dual win for coach Jason Puderbaugh. This is his 15th year coaching and tenth as head coach. He has been at B-L since ’17-18. Puderbaugh was third, second, and first at Topeka Seaman and served in the Army National Guard from ’97-06.