v Wrestling in KS: Around the State Wrestling Update 1/15 - Sports in Kansas 
Warning: include(../includes/bodytag.php): failed to open stream: No such file or directory in /home/kansass/public_html/ks/news/index.php on line 36

Wrestling in KS: Around the State Wrestling Update 1/15

Girls state wrestling from 2020 was the first ever at KSHSAA 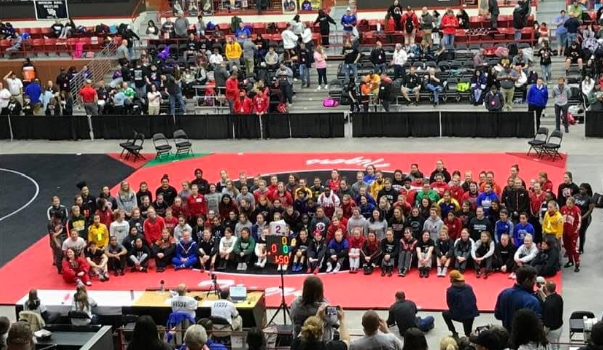 This week, SIK mainly focuses on girls’ wrestling after a look at the boys several days ago. This year marks the second season of KSHSAA-sanctioned girls’ wrestling, a sport that enjoyed excellent success last winter and has continued to grow. The girls opened the winter again with one classification though split into two (Division I, Division II) with larger numbers and coronavirus concerns. The boys’ side featured the Derby tournament last weekend and has the major Newton Tournament of Champions this weekend. A full TOC breakdown will come next week.

Baldwin vaults up in girls’ rankings

On Jan. 12, the next rankings came out. Division I had the same top-10 squads in the identical order. The key individual change came at 191. Shawnee Heights junior Maranda Bell moved from second to first, and flipped places with Washburn Rural senior Dajia Anderson, the defending state champion at 235.

A big change occurred at Division II when Baldwin took over the top spot. The top-10 had shakeup in several spots and reads: Baldwin, Pratt, Paola, Fort Scott, Hoisington, Wellington, Mulvane, Lakin, Oakley and Abilene. Baldwin was not ranked in the Nov. 17 one-class poll – and featured just one ranked wrestler, senior Emma Grossoehme, ranked sixth at 143. Baldwin has 19 girls on the roster.

Freshman Hayleigh Wempe is first at 170. Senior Jasmine Renyer is fifth at 191, and sophomore Madi Hargett is ranked fourth at 235. Wempe first broke into the rankings at fifth at 170 on Dec. 15. Wempe unseated Council Grove sophomore Jolie Ziegler from the top spot. Ziegler won the state championship in dominant fashion last winter.

Last season, Baldwin qualified just two wrestlers to state. Grossoehme went 24-8 at 143. She finished 2-2 at state, including a quarterfinal loss to Pratt’s Livia Swift. Hargett finished 18-14 at 235. That included a 1-2 record at state.

Baldwin performed well at the Olathe South Mixer on Jan. 9. The Bulldogs had three undefeated wrestlers: Wempe, Darnell and Grossoehme. Overall, Baldwin has eight total seniors, including Grossoehme and Renyer. Senior Daniela Kozavoca is a first-year wrestler from the Czech Republic and opened 10-3.

Paola’s 1-2 combination of Knecht and Kailyn Younger is off to an impressive start. Last season, Knecht went undefeated and was the eastern wrestler of the year. Younger was a state runner-up. This season, Younger, a junior, is ranked first at 120. Knecht is first at 126. Senior Americus Harris is sixth at 191.

They competed at Blue Valley Southwest on Jan. 9.

At 120, Younger picked up an impressive win versus Washburn Rural sophomore Addison Broxterman. Younger improved to 8-0, and Broxterman stood at 2-1. Younger won by fall in 4 minutes, 43 seconds. She also won her other two matches in 33 seconds and 1:32.

At 109, Shawnee Heights’ Odessa Schmidt captured the crown in the four-player round robin. SH sophomore Molly Busenitz took the 115-pound crown. She moved to 8-1.

An interesting matchup occurred at 170 when Washburn Rural teammates Rebekah Smith and Jaliah Johnson went first and second. Smith defeated Johnson, 2-1. A senior, Smith is 3-0. Johnson stands at 2-1. Both were third-place finishers for the Junior Blues last winter – Smith at 170 and Johnson at 191.

Bell wins title, moves to No. 1

Shawnee Heights’ Maranda Bell picked up the 191-pound title. Bell, a junior, stands at 9-0, and Anderson is 4-1. WR’s Sophia Ross captured the 285 title. Tonganoxie’s Holly Colvert pinned Anderson in 2:54, and then Bell won by fall versus Colvert in the final in 2:48. Colvert is first at 191 in Division II.

The B-L Invitational is one of the bigger girls’ wrestling tournaments. Baldwin won the nine-team tournament with 108 points, Gardner-Edgerton was second with 82. Ottawa took third with 63, while Fort Scott was fourth at 59 and Paola took fifth with 52.

For Paola, Younger took her first loss of the year with a 10-4 decision to Gardner-Edgerton’s Lilly Kepler. Younger finished second.

Knecht finished first and improved to 16-0. She won all four matches by fall, all in 2:27 or less. Johnson (14-3) picked up the title at 132. They were the only three competitors for Paola.

K.C. Turner has one wrestler, Arianna Ortiz, and she took first at 101. Ortiz is 10-1. Ortiz won three matches by fall and defeated Mitchell, 5-0. Ortiz is ranked second at 101 in Division I.

Among other winners, Basehor-Linwood’s Oliva O’Donnell won the two-girl bracket at 109. With 115, Gardner-Edgerton junior Michaela Konzem finished with a title and went 14-4. Additionally, G-E sophomore Shelby Davis (18-0) captured the crown in a seven-girl bracket at 138.

G-E sophomore Dakota Konzem (5-0) captured the crown with 143. Ottawa senior Darby Weidl (9-1) won at 155. Gardner-Edgerton has made a sizable jump after Konzem was the only Trailblazer state qualifier. Konzem went 1-2 at state.

Davis is the only G-E ranked wrestler and is fourth at 145.

Marysville’s Elise Rose competing against boys in the early going

Rose, who has been nationally ranked before, is ranked first at 132. She earned state runner-up to Knecht last winter. On Dec. 5, Rose helped Marysville win the four-team small school squad at the Riley County Falcon dual. Marysville defeated Larned, 34-34, in tiebreaker, along with a 48-30 win versus RC, and beat Smoky Valley, 54-23. Rose competed against boys in the tournament and went 1-2.

On Dec. 19, Marysville competed at Abilene. On Jan. 9, the Bulldogs went to the Beatrice (Neb.) Invitational. Rose took seventh in both meets, though was competitive in many matches, all that came against boys.

Senior Erin Wetterstrom went 5-0 at Olathe Northwest and defeated a pair of state ranked opponents. She remains undefeated in her weight class. She is ranked third at 109.

36th Annual Derby Invitational on the boys’ side last weekend

Last year, Derby Invitational was cancelled because of weather. This season, the tournament returned and featured eight schools. Because of COVID-19 concerns, the tournament was compromised of teams close to Derby. Maize won the tournament with 185.5, and Haysville Campus was second at 162. Derby finished third at 158.

Connor Padgett (14-0) remained undefeated at 160. Padgett finished 5-0 with a pair of wins by fall and three major decision victories. Mitchael Casement (13-0) won the championship at 220. Maize has taken a jump up the rankings. The Eagles were fifth in the Dec. 15 poll, fourth on Dec. 22 and third at Jan. 12.

Bonner Springs had three wins against No. 1-ranked wrestlers. Cruz Lara won at 138, and Cassius Vanderpool won at 145. Eudora’s Cael Lynch is ranked first at 138, and Eudora senior Holden Andrews is first at 145.

Olivia Stean moved up from 155 to 170. She defeated Division II top-ranked wrestler. Overall, Stean took second at the Ladycat Invitational.

Chanute was ranked second and Frontneac fifth in 4A and the defending champion Blue Comets picked up a 69-9 win over the Raiders in Frontenac on Thursday. Frontenac was short three wrestlers. Defending champion Brayden Dillow of Chanute and Dylan Ensch of Frontenac, both ranked in 182 with Dillow at the top highlighted a key match with Dillow winning 5-1. Pittsburg also knocked off Frontenac in the 2nd annual Crosstown Throwdown 48-24.