v Wrestling in KS: Around the State Wrestling Update 1/10 - Sports in Kansas 
Warning: include(../includes/bodytag.php): failed to open stream: No such file or directory in /home/kansass/public_html/ks/news/index.php on line 36

Wrestling in KS: Around the State Wrestling Update 1/10

Fort Scott off to impressive start. 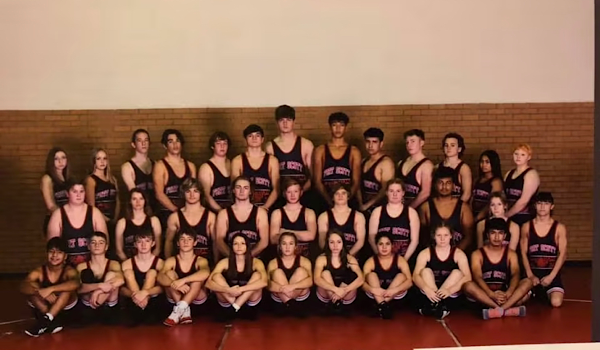 Compared to other sports, wrestling has likely had the most changes because of the COVID-19 pandemic. Multiple tournaments, especially on the girls’ side, have been cancelled. Other major tournaments lost many of its usual teams. Most squads are having a heavy dose of duals. The postseason structure, detailed by KSHSAA in early season, has significantly changed. Most notably, girls’ wrestling, in its second season as a sanctioned sport, split from one class to two. However, after a month of competition, SIK opens its third season of weekly wrestling notes with a look at several teams and individuals that have enjoyed strong starts – especially Hill City and Dodge City.

(Editor’s Note: Later this week, SIK will have a complete breakdown of the girls’ classification split into Division I and Division II, rankings and updates. This story heavily focuses on the boys’ side).

Last season, Goddard went 14-0 in duals and won its sixth straight state championship. Goddard is ranked first in 5A and first for all classes. The Lions have been the dominant wrestling power in Kansas.

Against Goddard, both teams had one open weight class.

For 152, Luke Barker defeated Goddard’s Jace Fisher, 2-1. Barker, a sophomore, is ranked first at 152 in 6A. Jace Fisher is ranked second at 152 in 5A. In the all-class rankings, Barker was second and Fisher fourth.

Dodge City captured the biggest two weight classes. At 220, Santonio Turner won by fall in 20 seconds, and Angel Aguilera earned a win by fall in 3:25 at 285. Turner is ranked third, and Aguilera sixth.

In the Dec. 31 Class 6A rankings, Washburn Rural is first and Dodge City stands second. DC competed in the Ark City Wayne Jackson tournament on Dec. 5 and the Colby Invitational on Dec. 11. At Wayne Jackson, Dodge City tallied 28 pins, six behind Maize for the tournament lead.

6A: Washburn Rural with dominant showing

Last winter, Washburn Rural won the inaugural girls’ KSHSAA wrestling title and took second in 6A boys. This year, WR boys are ranked first in 6A, and second in all-class rankings behind Goddard.

The girls are first in Division I ahead of Great Bend, Olathe West, Basehor-Linwood and Emporia. GB was state runner-up to Washburn Rural girls. WR had another complete performance Saturday. The two Junior Blues teams combined for 10 champions, 12 runner-ups and eight third places.

Last season, Hill City finished in 21st place at the state meet with 28.5 points. The Ringnecks qualified four wrestlers to state. Carter Underhill went 22-7 for the season and took fourth place at 106. He scored 18 team points. Kaleb Atkins finished 30-10 and 2-2 at state at 113. Aidan Hockman (120) and Thayn Walt (285) both went 1-2. Atkins was a freshman, and the other three were sophomores.

This year, Hill City was unranked in the opening Nov. 16 poll. Then, HC moved to second on Dec. 15 and stayed second on Dec. 23. The Ringnecks have been behind Hoxie, last winter’s state runner-up.

Underhill stands second at 106, including a championship at the season-opening Osborne Invitational on Dec. 5. Underhill defeated Ellis freshman Mason Younger, an elite wrestler in the younger ranks. Younger has moved into the poll at fifth at 106. Atkins stands third at 113. Plus, HC freshman Aiden Amrein has enjoyed a great start and is second at 152.

Amrein grew up in Ellis, and his dad is former Railroader head football coach Craig Amrein. Aiden has been a highly impressive wrestler. He was a 2016 Kansas Kids Champion, a 2018 Kansas Elementary State Champion and a 2020 Kansas Middle School State Champion.

He started going to Hill City this fall when Craig became HC’s defensive coordinator and picked up a teaching position. Amrein fought injury in football, though still rushed for 388 yards and four scores on 39 carries, made 24 tackles and served as the team’s primary kicker.

Additionally, senior Jayce Hamel is back and is ranked fifth at 182. Hamel has suffered several injuries in his high school career, though been highly productive when healthy. Hamel qualified for state in ’19 and won tournaments at Goodland and Ellsworth last winter. This year, Hamel took first at Goodland on Dec. 19. At Goodland, Hoxie finished in first at 183, Colby second at 171 and Hill City third with 110. After the tournament, Atkins stood at 8-3 took fourth.

Hoxie was the 3-2-1A favorite entering state last winter and finished second with three state champions. Two, Derek Johnson and Drew Bell, return. The Indians have enjoyed a great start. At Goodland, Tate Weimer (13-4) took second at 106. He lost to Ellis’ Younger, 8-2, and then won four matches in a row.

Jan. 9: Norton’s Fields named Most Outstanding Wrestler at own tournament; Hoxie with multiple champions; big win for Bretz at 138

Overall, Hoxie’s Weimer won at 106, and Shepard captured the 113-pound title. In a matchup of freshman at 120, Scott City’s Collin McDaniel beat Hoxie’s Carson Ochs for the championship. At 126, Bell improved to 22-0 with a 6-0 finals victory against Zach Rohrbough.

At 138, Drew Bretz defeated Oakley’s Eric Cain, 5-3, in a matchup of undefeated wrestlers. Bretz stands at 22-0, and Cain took his first loss to 11-1. Cain, a senior, is a defending state runner-up.

Derek Johnson picked up another title at 145. The sophomore improved to 19-0 after an 8-0 victory against St. Francis’ Garin Cooper in the championship.

At 160, Hoxie senior Aidan Baalman improved to 23-0 with a 9-2 finals win versus Beloit junior Tate Kadel. Both are returning state medalists.

At 220, Smith Center sophomore Jake Sasse improved to 15-3 with a championship. Scott City senior Gabe Bowers is 16-0 after a title at 285.

For 3-2-1A, 285 pounds has a pair of defending state champions. Osage City senior Dane Whalen, the first wrestling titlist in his school’s history, won at 220 last winter. Sylvan-Lucas’ Tra Barrientes earned the crown at 285. Whalen elected to bump up to 285.

On Dec. 18, Hoisington captured the 11-team Corner Classic. Hoisington won with 249.5 points. Great Bend took second at 218, and Larned was third with 138.5. The key match came in the championship at 160. Larned’s Samajay Alboyd was ranked first, and Eureka’s Brennan Lowe was second. However, they flipped positions after Lowe earned a 4-2 victory. Alboyd is the defending 145-pound state champion. Lowe won a state title in ’19 and was second in ’20.

For Hoisington, the Ball brothers have continued a great tradition. Older brothers Brandon, Christopher and Jonathan combined for eight state titles. This year, freshman Josiah Ball is ranked second at 113, and senior Joshua is first at 182. Overall, Josiah is 8-1 and took second at the Hoisington tournament. At 138, Evan Foltz (8-2) finished first and went 5-0. He won three matches by fall in a combined 71 seconds.

Fort Scott big climber in 4A; Andale takes over top spot from Chanute

In December, Fort Scott enjoyed a strong showing at its own dual tournament. Fort Scott defeated Prairie View, 63-6, and then beat Anderson County, 58-18. Then, FS earned a quality victory against Blue Valley Southwest, 58-12. BVSW is the defending 5A runner-up.

In the fifth round, Fort Scott beat Louisburg, 47-36. In the preseason rankings, Louisburg was third in 4A, and Fort Scott was unranked in 4A. Fort Scott bumped to fifth in the 4A rankings on Dec. 15 and remained there in the latest poll on Dec. 23. Blue Valley Southwest was fifth in 5A in the preseason and currently stands ninth.

At 182, Malachi Vann enjoyed a strong tournament. Vann won by fall in 1 minute, 51 seconds. He picked up an 18-5 victory versus Blue Valley Southwest, and defeated Louisburg with a 15-0 technical fall. Vann is ranked fourth at 170. Senior Coby Burchett is second at 132, and junior Jacob Stinnett stands second at 152. Senior Tommy Rodgers is fifth at 182.

3-2-1A: Perry-Lecompton with solid showing in January

Perry-Lecompton finished 3-2 with dual wins against Atchison County, Riley County and Wellington. Both Thad Metcalfe and Mason Bahnmaier went 5-0 and five pins and earned team’s wrestler of the night.